xxxxxIn his major work, Principles of Geology, completed in 1833, the Scottish geologist Charles Lyell denounced catastrophism, Cuvier’s idea that the Earth’s surface had been formed by a sudden series of catastrophes over a short space of time. Based on his own research, he came out strongly in favour of Hutton’s theory of “uniformitarianism” (1785 G3b). This held that past geological changes had taken place gradually over a vast period of time, caused by processes which were still ongoing. As a result, Lyell put the age of the earth at 240 million years, a vast difference from the 6,000 years based on scripture! In fact, his arguments were widely accepted. Furthermore, the idea that the past could be explained by what could be seen in the present, once applied to biology, had a marked influence upon Darwin’s thinking on his theory of evolution, especially given the much larger time scale. Lyell also made an important contribution to the science of stratigraphy, classifying the Tertiary period in Western Europe, and using faunal changes to put rock layers in chronological order. During a distinguished career, during which he travelled widely in Europe and North America, he made a vast number of friends. These included Charles Darwin, the politician Sir Robert Peel, the historian Thomas Macaulay, and the physicist Michael Faraday. He was knighted in 1848, assisted in the Great Exhibition of 1851, and received a baronetcy in 1864. 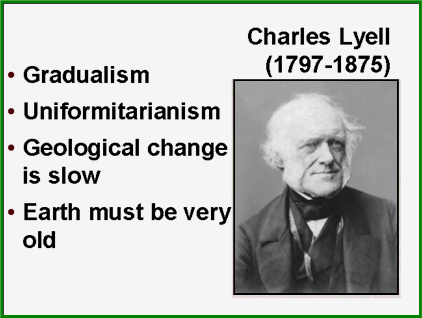 xxxxxCharles Lyell was born at Kinnordy in Forfarshire, Scotland, but he spent his childhood in the New Forest area in Hampshire, where his family moved when he was less than two years old. He went up to Oxford at the age of 19, and it was here that he attended lectures by William Buckland and acquired a profound interest in geology. He graduated in 1819 and became a lawyer in London, but eight years later he abandoned the law to study geology in depth. To this end he travelled widely, carrying out first-hand inspections of geological formations. He made several trips to Europe and, later in his career he conducted a number of lecture tours in North America, accompanied by his wife. It was in 1829, after a crucial visit to Mount Etna in Sicily, that he returned to begin work on his major project, his Principles of Geology. He finished the first part in 1830, and completed the third and final volume in 1833.

xxxxxIn this highly influential work he launched a powerful attack upon catastrophism, the theory put forward by the French anatomist Georges Cuvier (whom he had met in Paris in 1828). This theory held that the Earth’s features had been formed by a series of sudden catastrophes occurring in the space of a few thousand years. Instead, based on independent research, Lyell came out strongly in support of 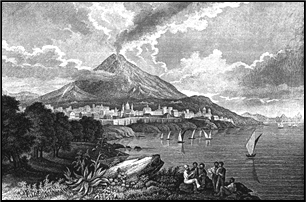 “uniformitarianism”, the idea advanced earlier by the Scottish geologist James Hutton (1783 G3b) that past geological changes had taken place gradually over a vast period of time, brought about by processes which were still ongoing. In fact, Lyell argued, the Earth was not a mere 6,000 years old, as biblical text might suggest, but had been in existence for at least 240 million years. He had found clear evidence of this, he maintained, during a close study of the region around Mount Etna (illustrated) in 1829.

xxxxxIn Hutton’s time, this idea that the present was the key to the past and that, by necessity, changes had taken place on a huge geological time scale, had been rejected out of hand. It was explained in clearer and simpler terms by Hutton’s friend, John Playfair, in 1802, but it was left to Lyell to produce a more detailed, coherent explanation in order to convince the vast majority of his fellow scientists, and the public at large, of the merits of the case. This he did in no uncertain terms. Indeed, apart from some theological prejudice, his findings were enthusiastically received, assisted in no small m 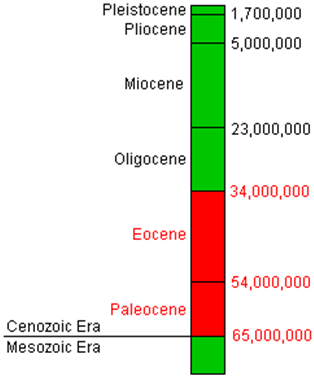 easure by the strength of his own, detailed arguments, and the amount of fossil evidence that had been accumulated over the past fifty years, lending support to Hutton’s earlier conclusions.

xxxxxLyell also gained recognition as one of the founders of stratigraphy, both for his classification of the Tertiary strata of Western Europe, the first to be made, and the means by which he made his divisions. He divided the rocks of this period (65 to 1.7 million years) into three epochs - Eocene, Miocene, Pliocene - and arrived at these subdivisions in time not by determining a difference in the rocks themselves, the normal procedure, but by comparing the numbers of marine fossils of living species found within the different layers of rocks, thereby arriving at a more accurate time scale. The names of these stages - with some modification - are still in use today, and his faunal distinctions proved highly successful in arriving at a chronological order.

xxxxxAnother dimension to Lyell’s contribution to science, and one which was not fully realised at the time, was his influence on the English naturalist Charles Darwin. The idea that the past can be explained by what can be seen in the present, once applied to biology, had a marked influence on his theory of evolution. We know that Darwin had read Lyell’s Principles before setting off on the Beagle, and that he had found that many of his own observations fitted into the concept of uniformitarianism and its dependence upon a vast period of geological time. On his return, Darwin became a close friend of Lyell, and they frequently wrote to each other. Indeed, well aware that his ideas would stir up a hornet’s nest once he went public, at first Darwin only confided them to a few friends, Lyell being one of them. That Lyell had a considerable influence on Darwin’s thinking was clearly recognised by Darwin himself. “The science of geology,” he later wrote, “is enormously indebted to Lyell, more so, as I believe, than to any other man who ever lived”.

xxxxxFor his services to geology, Lyell was knighted in 1848, and three years later he served as a commissioner for the Great Exhibition, and became involved in a programme of educational reform at Oxford University. During his long and distinguished career he made many friends. In addition to Darwin these included the astronomer Sir John Herschel, the leading Whig Sir Robert Peel, and the historian Thomas Macaulay. He was also on friendly terms with the royal family, met Sir Walter Scott and the German scientist Alexander von Humboldt, and worked for a time with the physicist Michael Faraday on ways of preventing mining accidents. He received a baronetcy in 1864. 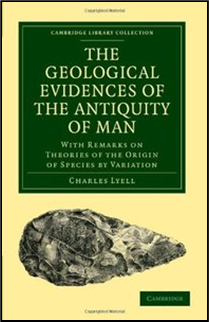 xxxxxIncidentally, he was constantly revising his Principles. He produced no less than twelve additional editions, the last appearing in 1875. In his work he was helped considerably by his wife Mary, whom he married in 1832. She shared his interest in geology, and travelled with him on his lecture tours in America. When she died unexpectedly in 1873 he never recovered from her death. ……

xxxxx…… Lyell helped with the publication of Darwin’s ideas, and those of Alfred Russel Wallace, but it took some time for him to accept the theory of evolution in full. In his The Geological Evidence of the Antiquity of Man, published in 1863, he cautiously acknowledged the idea of natural selection, but he did not accept Darwin’s conclusions in toto until a revision of his Principles two years later. ……

xxxxx…… A mountain near Queenstown in western Tasmania, and the highest peak in the Yosemite National Park in central California, are named Mount Lyell in honour of the Scottish geologist. (Yosemite is a native word meaning “grizzly bear”.) 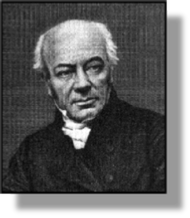 XxxxxThe geologist and Anglican priest William Buckland (1784-1856), the lecturer who inspired Lyell to take up geology as a career, clung tenaciously to the catastrophic theory, arguing that Noah’s flood, as recorded in the bible, had caused all the erosion and sedimentation upon the earth. In 1823 he wrote his Relics of the Deluge, an attempt to prove his theory by a study of fossils from deposits in Kirkdale Cave in Yorkshire. Today, however, he is remembered for a very different reason. A year later, on becoming president of the Geological Society in London, he announced a find he had made of some large fossil bones

while working in Stonesfield quarries near Oxford in 1815. All of the same genus, he named his fossil Megalosaurus or Great Lizard, estimated to have been some forty feet in length. It proved to be the first published description of a dinosaur, though the term had yet to be coined! Among the pieces was a large lower jaw bone, here illustrated.

xxxxxIncidentally, Buckland had a well-earned reputation for eccentricity. It is said that he had a liking for unusual meat and, over the years, had eaten hedgehog, mole, mouse, ostrich and even crocodile. On one occasion, during a visit to Lord Harcourt, the Archbishop of York, he had been shown a precious relic, the heart, it was claimed, of King Louis XVI of France. The story goes that, sorely tempted, he took it out of its silver casket and promptly ate it!