xxxxxBy his poems, novels, plays and short stories, the Russian writer Aleksandr Pushkin was the founder of his country’s modern literature. His interest in the history and folklore of Russia, and his use of the vernacular, gave new life, freedom and energy to the Russian language. His major works were his novel in verse Eugene Onegin, compiled in 1831, and his tragic, historical drama Boris Godunov, published the same year. And he is remembered, too, for his earlier work, the romantic fairy tale in verse Ruslan and Ludmila. Notable among his other pieces were his two long poems, Poltava and The Bronze Horseman, and his short story The Queen of Spades. Much of his writing contained an explicit or subtle plea for social and political reform, and this cost him some years in exile. He was pardoned by Tsar Nicholas I in 1826 and returned to Moscow, but was mortally wounded in a duel in 1837. His writing, universal in its appeal, influenced, among others, Dostoyevsky, Tolstoy and Chekhov. 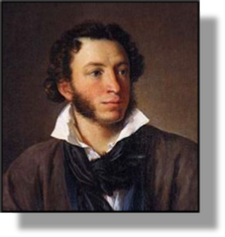 xxxxxThe versatile Russian writer Aleksandr Pushkin, virtually founded Russian literature by his lyric and epic poems, novels, plays and short stories, many from the history and folklore of his own country. In particular, his use of the vernacular, helped to free all these literary forms from dependence on foreign influences and their traditional constraints. Today he is especially remembered for his two works, the novel in verse Eugene Onegin, compiled in 1831, and his tragic, historical drama Boris Godunov, published the same year.

xxxxxHe was born in Moscow into a noble if somewhat impoverished family, and from 1811 to 1817 was educated at the Imperial Lyceum at Tsarkoye Selo, a town south of St. Petersburg. It was here that he completed his first major work Ruslan and Ludmila, a long romantic fairy tale in verse based on Russian folklore in which the epic hero Ruslan braves many dangers to rescue his bride, Ludmila, from the evil magician Chernomor. Published in 1820, it was severely criticized for its disregard of current literary rules, but it brought him early fame nonetheless.

xxxxxOn leaving the Lyceum he was given a post in the foreign office at Saint Petersburg and, being of noble birth, was able to enjoy life in high society. There was, however, a very serious side to Pushkin’s nature. As a child he had come into contact with the peasantry on his grandmother’s estate near Moscow, and had become deeply concerned at their desperate plight. Thus whilst he mixed freely with the aristocratic élite, he was also an active member of a clandestine revolutionary group which was committed to social reform, the Union of Welfare. As such, he became the spokesman of those who were destined to be leaders in the Decembrist Uprising of 1825. The result was inevitable in the Russia of his day. His writings, notably his Ode to Liberty of 1820, led to official condemnation and a long spell in exile, first to Kishinev in the Caucasus, then to Odessa in 1823, and then to his mother’s estate of Mikhaylovskoye, near Pskov in the remote north-west. 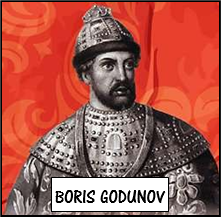 xxxxxHis years of exile in the Caucasus produced a series of outstanding poems, centred around a love of freedom which, in these early years of the 1820s, was understandably influenced by the works and doings of Lord Byron. The Prisoner of the Caucasus was published in 1822, followed closely by The Robber Brothers and The Fountain of Bakhchisaray. And it was during this period that he began work on his most famous love story in verse, Eugene Onegin, regarded by some as Russia’s first great novel. In 1823 he was transferred to Odessa, and before long was soon in deep trouble with the authorities, this time for his atheistic views as well as for his Wasteland Sower of True Freedom, a tract in which he denounced serfdom and warned of revolution. This resulted in his being banished to his mother’s rural estate, and it was here that he wrote his historical tragedy Boris Godunov, a masterly piece of drama which owed much to Shakespeare. Published in 1831, this portrayed the former Tsar as the murderer of Dmitri, Ivan the Terrible’s little son, though there is no firm evidence to that effect. 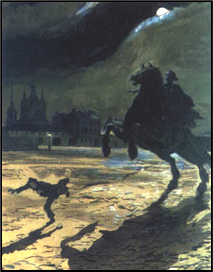 xxxxxBy now, these works had gained him a wide popularity and, in recognition of this, Tsar Nicholas I pardoned him, allowed him to return to Moscow in 1826, and even promised some reforms. However, relations with the government remained strained, to say the least, though he was able to continue his writing. Here he made further calls on Russian history with his two long poems Poltava of 1828 and The Bronze Horseman five years later, a telling tale in which society’s powerless “little man” is chased through the streets by the statue of the all-powerful Peter the Great (illustrated). To the 1830s belong his four “little tragedies” - Mozart and Salieri, Feast in Time of the Plague, The Covetous Knight and The Stone Guest - together with his novel The Captain’s Daughter, based on the Pugachev rebellion of 1773, and a number of short stories, including the highly successful The Queen of Spades. In the meantime he had married a society lady, and this caused his downfall and death. Her extravagance put him into debt 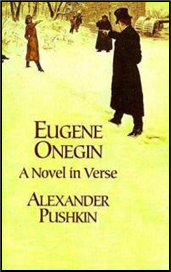 and in 1837, having to fight a duel with his brother-in-law to defend her honour, he was mortally wounded.

xxxxxEugene Onegin, Pushkin’s best-known work, is clearly coloured by the extravagant social life he once enjoyed when working in St. Petersburg. Set in contemporary society, it tells of a shallow, skeptical young man who, seeking his own pleasures, disdains the love of the precious Tatyana, a humble, provincial girl, only to be rejected by her when she later achieves a position in society. Simple in plot but powerful in the telling, the tragic Onegin became a model for future heroes in Russian literature, and a fitting tale for an opera by the Russian composer Tchaikovsky, produced in 1878.

xxxxxPushkin’s delightful lyric poetry, and his simple but powerful prose, combined with his deep understanding of Russia and its people, gave life to his native tongue and marked him out as the virtual founder of his country’s modern literature. His writing, universal in its appeal, influenced, among others, Dostoyevsky, Tolstoy and Chekhov. Furthermore, his works, translated into many languages, have been the source of inspiration for a number of composers apart from Tchaikovsky, including Glinka (the opera Ruslan and Ludmilla), Mussorgsky (the opera Boris Godunov), and Rimsky-Korsakov (the opera The Golden Cockerel).

xxxxxIncidentally, Tsarskoe Selo (“the tsar’s village), the town where Pushkin studied in the early 1800s, was renamed Detskoe Selo (“the children’s village) in the 1920s, but since 1937 has been called Pushkin in honour of Russia’s great poet. Likewise, the Lyceum where he went to school is now a museum commemorating his life and work. …… 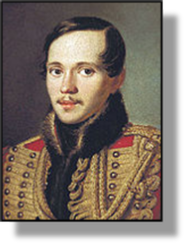 xxxxx…… Thexdeath of Pushkin deeply upset his fellow countryman Mikhail Lermontov (1814-1841), the leading romantic poet at this time, and a passionate believer in freedom of the individual. He wrote an elegy On the Death of A Poet in which he denounced his killer, and blamed the Tsar and his court for ignoring Pushkin’s pleas for reform. As a consequence he was arrested and exiled to the Caucasus. His major works were his narrative poem The Demon, and his psychological novel A Hero of our Time, both of which cried out against the imperfections of the world in general and society in particular. Ironically enough, he was also killed in a duel, at the age of 26. ……

xxxxx…… In 1881 the Russian Academy of Sciences, in honour of Pushkin, established the Pushkin Prize, awarded to any Russian who achieved the highest standard of literary excellence. The prize was discontinued during the communist period, but restored in the 1990s. Among those who received the prize was the dramatist and writer of short stories Anton Chekhov.

xxxxxOne of Pushkin’s closest friends was the Russian novelist Nikolai Vasilyevich Gogol (1809-1852). Having gained fame with his Evening on a Farm near Dikanka in 1832, he went on to produce his two major works, The Inspector General, an amusing but savage satire on government bureaucracy, and his Dead Souls, a tale in which an adventurer makes money from the death of serfs. From 1836 he travelled about Europe, and it was then that his caustic, sardonic humour gave way to religious fanaticism. After visiting the Holy Land, he returned to Moscow convinced that his writings were sinful and in 1852, the year of his death, he destroyed the manuscript of the second part of his Dead Souls. The realism of his work and the social protest it contained had a marked effect upon Russian literature. 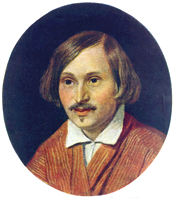 xxxxxOne of Pushkin’s closest friends, and his successor, was the Russian novelist and dramatist Nikolai Vasilyevich Gogol (1809-1852). He gained overnight fame with his Evening on a Farm near Dikanka in 1832, a collection of stories and sketches rich in Cossack and Ukrainian folklore. There followed more such tales in Mirgorod (the town of his birth) and then his Arabesques of 1835, a strange mixture of short stories dominated by a pessimistic, cynical view of humanity. 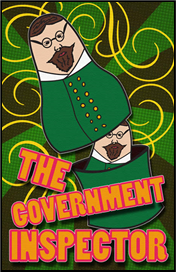 xxxxxAnd this troubled vision shaped the comic and often fanciful world of his masterpieces, his comedy of errors The Government Inspector, an amusing but savage satire upon government bureaucracy, produced in 1836, and his best known work Dead Souls, written during the 1830s but published in 1842. This picaresque novel is a witty, humorous but grotesque tale of an adventurer who buys up dead serfs (known as “souls”) before they are officially registered as deceased, and pawns them in a bank, planning to make a comfortable living from the money thus raised! And this bizarre vision of the world was to be seen in his two most famous short stories, The Overcoat, about the tribulations and tragic end of a poorly paid government clerk (which he once was!), and his comic, surrealist tale entitled The Nose, published in 1836. 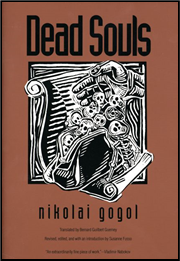 xxxxxFrom this year until 1849 he traveled around Europe, spending most of his time in Rome. It was a period which witnessed his decline. By now his caustic, sardonic humour began to give way to a religious fanaticism in which he saw himself as some sort of saviour, cleansing the world of evil by his attack upon its social and political abuse. In 1848 he went on a pilgrimage to the Holy Land, and returned to Moscow convinced that he had failed in his divine task, and that all his writings were sinful. Influenced by a local priest and, by now bordering on madness, in February 1852 he burned the manuscript of the second part of his Dead Souls. He died ten days later. The realism of his work and the social protest it contained had a marked effect upon Russian literature.

xxxxxIncidentally, St. John’s Eve, one of his short stories in the collection Evening on a Farm near Dikanka, formed the basis for St. John’s Night on the Bare Mountain, a symphonic poem for orchestra, produced by the Russian composer Modest Mussorgsky in 1867.