xxxxxIn 1822, after he and his friend John Herschel had spent long hours compiling astronomical tables, the English inventor Charles Babbage, a professor of mathematics at Cambridge University, began building a mechanical calculating machine - his “difference engine”. He received financial support from the government, but he met with difficulties and abandoned the project when in 1833 he conceived the idea of constructing an “analytical engine”. This was a more advanced machine, and one which bore marked similarities to the workings of a modern day digital computer. However, requiring some 50,000 moving parts, it proved beyond the technical know-how of the day and he was eventually obliged to abandon the idea. For some years during his attempt to build this “computer” he was assisted by the accomplished mathematician Augusta Ada Lovelace, the daughter of Lord Byron. Babbage took part in the founding of the Analytical, Astronomical and Statistical Societies, and his Reflections on the Decline of Science in England, published in 1830, helped to establish the British Association for the Advancement of Science the following year. He was a fellow of the Royal Society from 1816. 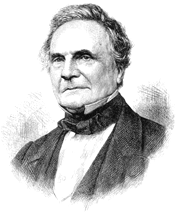 xxxxxThe Englishman Charles Babbage, a professor of mathematics at Cambridge University, began his career as an inventor in 1822. It was in that year that he completed the construction of a small working model of an automatic mechanical calculating machine. He had realized for some time that in mathematics many long computations consisted of a series of regularly repeated operations, a process which could be effectively harnessed automatically as well as mechanically. He called this prototype a “difference engine” and the following year, with approval from the Royal Society and financial assistance from the government, he started the construction of a full-scale model. He envisaged that it would take three years to build and, when completed, would be able to compute squares to six places of decimals automatically and, in addition, print out its conclusions. 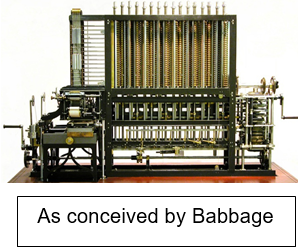 xxxxxThe idea of making such a machine came to him while he was a student at Cambridge in the early 1800s, working with the astronomer-to-be John Herschel (son of the famous William Herschel). They were compiling astronomical tables, and it struck him that this operation could be automated. This would not only replace a tedious task, but would also avoid the errors that often occurred in the compilation. Unfortunately, the building of a full-scale working model - powered by steam and requiring falling weights to drive a myriad of toothed wheels and shafts - proved much more difficult than expected. Despite another injection of government money, and constant modifications in design, the project virtually ground to a halt. After ten years of hard labour Babbage wearied of the task and, in 1833, came up with a new and much grander idea: the making of what amounted to a programme-controlled digital computer, an automatic device which, in fact, did not come into being until the second half of the 20th century.

xxxxxHe called this new machine an “analytical engine”, and his attempt at making it was to occupy him for many years, end in failure, and use up much of his fortune. Whereas his “difference engine” had had but one function, he saw this new device as being able to perform any mathematical calculation required by its operator. It would be programmed by a punch-card system similar to that invented by the 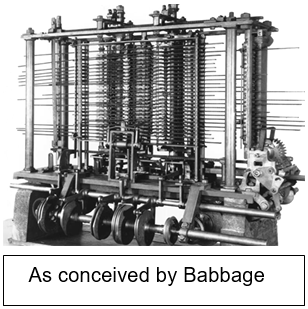 French weaver Joseph Marie Jacquard for the working of a loom, and be equipped with a memory unit which would store numbers and be capable of making decisions based on the results of previous computations. Like his difference engine, it would be powered by steam and, when fully completed, would require only one operator.

xxxxxBabbage put a great deal of thought and effort into this project, particularly in the mid 1830s, but it proved a concept ahead of its time. It is estimated that it would have required a minimum of 50,000 moving parts and there was just not the tools and manufacturing skills available to meet such a demand. Asxa result, the “analytical engine” was never completed. Nonetheless, a useful description of the engine was given by Augusta Ada Lovelace (1815-1852), the daughter of the English poet Lord Byron, when she met Babbage in 1833. She described it as weaving algebraic patterns “just as the Jacquard-loom weaves flowers and leaves”. A mathematician in her own right, she assisted Babbage over a number of years, and was one of the few people at that time who saw the machine’s potential. In 1842 she published details of the way it would work (Elements of Charles Babbage’s Analytical Machine) and went so far as to create a programme for it the following year. Needless to say, it was never used, but she is now seen as the first computer programmer and, in her honour, a programming language was named ADA in 1979. 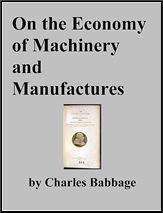 xxxxxBabbage was born in London, and attended Cambridge University. He became a fellow of the Royal Society in 1816 and was appointed professor of mathematics at Cambridge in 1828, a post he held for twelve years. He never taught, but spent a great deal of time on research, and showed an interest in a wide variety of subjects. Apart from the work on his calculator and would-be computer, he invented, amongst other items, the cowcatcher (never built), and an early version of the speedometer. He took part in the founding of the Analytical Society (1812), the Royal Astronomical Society (1820), and the Statistical Society (1834), and his Reflections on the Decline of Science in England, published in 1830, helped to establish the British Association for the Advancement of Science the following year. His most influential work was his On the Economy of Machinery and Manufactures, a study of the economics governing industrial production.

xxxxxFollowing his death, the Royal Society produced no obituary, the Times ridiculed him, and only a handful attended his funeral, but though he never managed to build a working mechanical computer, Babbage was the first to conceive the feasibility of such a machine, and, in essence, his design concepts contained the basic features - memory, hard drive and processor - which make up the modern computer. Onxthe other hand, his difference engine, less technically demanding, was developed by others. Two Swedish engineers, Georg Scheutz (1785-1873) and his son Edvard (1822-1881), working on his advice, built a modified version of this machine by 1853 (illustrated right), and in 1876, a few years after Babbage’s death, the American inventor George Barnard Grant (1849-1917) put a full-sized version on show at the Philadelphia Centennial Fair (illustrated

left). Much later, in 1937, Babbage’s notebooks were discovered, and in 1991, to mark the 200th anniversary of the inventor’s birth, a group of British scientists built the difference engine to his specifications and, after correcting two errors, found it to be accurate to 31 digits! An unfinished section of his original machine can be seen at the Science Museum at Kensington, London.

xxxxxIncidentally, the eccentric professor Babbage, as befits a mathematician, was a stickler for accuracy. He once wrote to the English poet Lord Tennyson to object to his lines “Every moment dies a man, Every moment one is born”. He pointed out that the world’s population was growing and therefore the second line should read “Every moment one and one-sixteenth is born”! ……

xxxxx…… His difference engine, designed to avoid the “intolerable labour and fatiguing monotony” involved in mathematical calculation, was so named because it was to work by solving the differences between the values given to variables within equations.

xxxxxAnotherxinventor at this time was the Swedish-born American inventor John Ericsson (1803-1889). In 1836 he developed the screw propeller, first used the following year on the London-built vessel Francis B. Ogden, and then on the small iron warship called the Princeton three years later. In the American Civil War which began in 1861 (Va), his revolutionary warship Monitor, complete with revolving gun turret, was to play an important role on behalf of the federal government. As we have seen, Ericsson also helped to construct The Novelty, the steam locomotive which competed against George Stephenson’s Rocket at Rainhill, Lancashire, in 1829.

xxxxxJohn Herschel (1792-1871) worked with Charles Babbage when they were at Cambridge University. Son of the famous astronomer William Herschel, he followed in his father’s footsteps, adding to his catalogue of stars, and staying four years at the Cape of Good Hope to record binary stars, nebulae and clusters in the southern skies. He wrote A Treatise on Astronomy in 1833, and expanded this work in his Outlines of Astronomy of 1849. He was also an accomplished chemist and made advances in the field of photography. He gave lectures on this subject and coined the terms negative and positive. 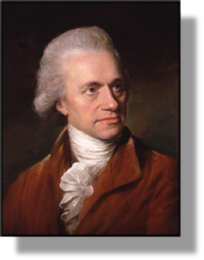 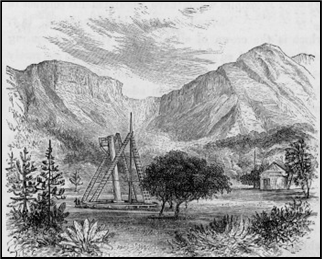 xxxxxJohn Herschel (1792-1871), who worked with Charles Babbage when they were students at Cambridge University, followed in his father’s footsteps, the famous astronomer William Herschel. He revised his father’s survey of the northern hemisphere, adding to his catalogue of stars, and in 1834 he and his family journeyed to the Cape of Good Hope to study binary stars, nebulae and clusters in the southern heavens. During his four-year stay there he recorded the locations of nearly 69,000 stars. He wrote A Treatise on Astronomy in 1833, and expanded this work into his highly popular Outlines of Astronomy in 1849. His General Catalogue of Nebulae and Clusters, containing over 10,000 multiple and double stars, was published after his death. (The illustration shows Herschel’s 20ft telescope set up at Feldhausen in South Africa.)

xxxxxHe became president of the Royal Astronomical Society in 1848 and, like his father, was knighted (1831), and then created a baron (1850). He was also an accomplished chemist and was particularly interested in photography, a word he himself coined, together with the terms negative and positive. He gave lectures on this subject, and during his research discovered a better fixing agent for use in the developing process. He was appointed master of the Mint in 1850, but he suffered a nervous breakdown in 1854, and retired two years later. He was buried in Westminster Abbey after a state funeral.

xxxxxIncidentally, it was in 1835 when Herschel was working in South Africa that he was the target of a huge newspaper hoax. In that year the New York Sun ran a series of articles gleaned from the 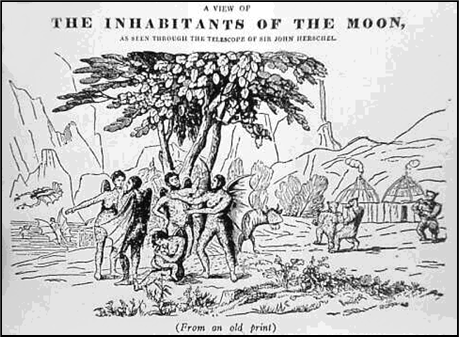 “Edinburgh Journal of Science” (which was no longer in existence!) describing life on the moon as seen by Herschel through his “revolutionary” telescope. The instalments gave a vivid account of the lunar landscape, its craters, vegetation and strange animals, and then went on to describe the moon “people” themselves, furry men and women who looked like bats and could fly like them! When Herschel finally heard of the hoax, he took it in good part, but complained that he had been pestered by journalists and others from all over Europe!

xxxxxThe hoax, it turned out, originated from Richard Adams Locke, the editor of the Sun, and was meant as a satirical attack upon the extravagant and pompous works of a local writer of scientific books named Dr. Thomas Dick. Locke later admitted that his hoax had got somewhat out of hand. The illustration shows the moon people together with beavers that walked on their hind legs and lived in wooden huts! It reads: As seen through the telescope of Sir John Herschel.