xxxxxThe American artist and naturalist John Audubon spent his boyhood near Nantes, in France, and first observed and sketched birds along the banks of the Loire. He emigrated to the United States at the age of 18 and, after failing in business, decided to make a study of American birdlife. He travelled extensively, and by 1825 had compiled an impressive portfolio of exquisite bird illustrations in watercolour, all taken from life. The first volume was published in the United Kingdom in 1827 under the title The Birds of America. The entire series, completed in 1838, contained 435 hand-coloured plates illustrating over one thousand birds. He returned to the United States in 1839 and, during the next tens years, completed his Viviparous Quadrupeds of North America, a study in three volumes containing 150 plates. In this work he was assisted by his two sons and the American naturalist John Bachman. 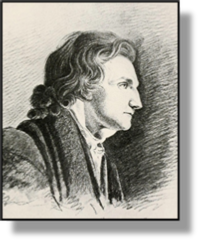 xxxxxThe artist and naturalist John Audubon was born in Les Cayes, Santo Domingo (now Haiti), the illegitimate son of a successful plantation owner and his French mistress. At the age of four his father brought him and his half-sister, Rose, back to Nantes in France, and it was here, in the marshes bordering the Loire river, that he first observed and sketched birds. It was an interest, indeed a passion, that he was never to lose. He was educated in Paris and attended drawing lessons with the famous French artist Jacques Louis David, but at the age of 18, partly to avoid being conscripted into Napoleon’s army, he emigrated to the United States. 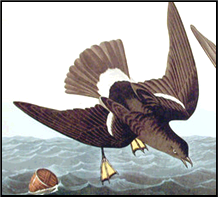 xxxxxIn America, he first settled near Philadelphia where he managed the family-owned estate. There he met his wife, Lucy Bakewell, continued his painting of wildlife, and conducted some experiments in bird migration, being one of the first Americans to ring birds for that purpose. Then he and his wife travelled down the Ohio River to Kentucky, where they managed a general store, first at Louisville and then in Henderson. Neither venture was very successful, however, and in 1820, hoping to profit from his artistic talent, he decided to devote his time to the painting of American birds. In search of his subject matter, he took off down the Mississippi with a young assistant, living a hand-to-mouth existence whilst he wife earned money as a governess in order to care for their children. Within five years he had compiled an impressive portfolio of exquisite, highly-detailed bird illustrations, all taken from life, but he then had difficulty in finding a publisher and, more to the point, an engraver with the necessary skill to do justice to his watercolour drawings. In 1826 he was obliged to journey to Britain in the hope of finding an outlet for his work. 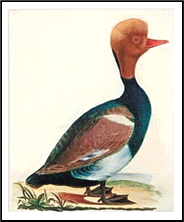 xxxxxIn the United Kingdom his realistic paintings of American birdlife were greatly admired for their delicate colouring and attention to detail, and he had little difficulty in finding a suitable publisher and engraver. The first volume of his masterpiece, The Birds of America - which finished up containing 435 hand-coloured plates and depicting over one thousand life-size bird illustrations - appeared in 1827. Publication, completed in 1838, was by subscription, and this proved extremely popular, with the king himself numbered among the subscribers. Andxat the same time, in collaboration with the Scottish ornithologist William MacGillivray (1796-1852), Audubon produced his Ornithological Biographies. This five-volume companion work, published between 1831 and 1839, provided a life history of each of the species illustrated in the series. 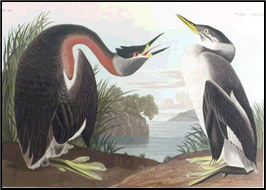 xxxxxThe “American Woodsman”, as he came to be known, finally returned to New York in 1839, having achieved fame and fortune. Over the next four years he published a second work entitled The Birds of America. Made up of seven octavo volumes, the drawings were reduced in size but the biographies were included. Then in 1843 he was off on his travels again, travelling out West in search of specimens for his new project The Viviparous Quadrupeds of North America. Compiledxwith the help of his sons and the Lutheran minister and naturalist John Bachman (1790-1874), it contained 150 folio plates and was completed in three volumes by 1848. Its text, however, was not finished and published until after his death.

xxxxxIllustrated below are five of his exquisite bird prints:

xxxxxIncidentally, towards the end of his life Audubon wrote: In health and sickness, in adversity and prosperity, in summer and winter, amidst the cheers of friends and the scowls of foes, I have depicted the birds of America. ……

xxxxx……xThe Audubon Society for the Protection of Birds, named in his honour, was founded in 1886. It was renamed the National Audubon Society in 1905, and today has more than 500,000 members. ……

Xxxxx…… As we have seen, the English bird watcher and amateur naturalist Thomas Bewick produced his British Land Birds in 1797 and British Water Birds in 1804. A printer by trade, he provided superb illustrations from his watercolour studies, but his works were by no means as extensive as those of Audubon. ……

Xxxxx…… No less stunning are Audubon’s hand-coloured plates of American viviparous quadrupeds. Illustrated below are a fox, prairie wolves, a wildcat and a bison.