xxxxxAs we have seen, it was in 1800 (G3b) that the Italian physicist Alessandro Volta produced the first battery. It was by using this source of current electricity that in 1820 the Danish physicist and chemist Hans Christian Oersted discovered by chance that an electric current in a wire was able to deflect a magnetic needle. This had far reaching consequences in the field of electromagnetism. In addition to this research, Oersted also worked on the compressibility of gases and liquids, and in 1825 was the first to isolate aluminum. As we shall see, following Oersted’s discovery of 1820, the French physicist and mathematician André Marie Ampère elaborated on his findings, and in 1831 (W4), benefiting from this additional research, the English scientist Michael Faraday made the first dynamo, and laid the foundation for the development of a workable electric motor and generator.

xxxxxIt was in April 1820, while giving a public demonstration, that the Danish physicist and chemist Hans Christian Oersted discovered by chance that electric current in a wire was able to deflect a magnetic needle, a discovery which was to have far reaching consequences in the field of electromagnetism within the space of a few years - notably the development of the electric motor and generator.

xxxxxOersted was born at Rudkobing, Langeland. After studying at the University of Copenhagen and receiving his doctorate in 1799, he worked as a pharmacist before going on a tour of Europe in the opening years of the new century. On his return in 1803, his public lectures and demonstrations proved highly successful, and led to his being appointed professor of physics at Copenhagen three years later. There he conducted research, mainly in electric currents and acoustics. He held this post until 1829, when he became director of the capital’s Polytechnic Institute. His major work, Manual of Mechanical Physics appeared in 1844. (The statue illustrated here is at the Museum of Natural History, Oxford University.)

xxxxxAs we have seen, as early as 1786 the Italian physiologist Luigi Galvani, dissecting a dead frog, had discovered the electrical nature of nervous impulse, and it was around this time, too, that the French physicist Charles Coulomb put forward a number of significant papers on electricity and magnetism. However, it was the Italian physicist Count Alessandro Volta who, in 1800 (G3b), turned his attention to current electricity and produced the first battery, known as the “voltaic pile”. This provided the first ready source of current electricity, and it was by using this sustained source that Oersted was able to make the first connection between magnetism and electricity.

ationship between electricity and magnetism, and he predicted the same in 1813. However, it took a further seven years of experiments before, by placing a current in a wire parallel to the magnet needle instead of transverse to it, he stumbled on the means of proving that electric current flowing in a wire produced its own magnetic field.

xxxxxIn addition to his pioneer work in electromagnetism, Oersted also worked on the compressibility of gases and liquids, and in 1825 he was the first to isolate aluminium, describing it as a metal which “in colour and lustre somewhat resembles tin”. This metal had been discovered by the English chemist Humphry Davy in 1808. He had named it aluminum (now generally known as “aluminium” save in the United States), but he had been unable to separate it from its oxide.

xxxxxAs we shall see, Oersted’s discovery of the phenomenon of electromagnetism brought quick results and benefits. Almost at once, the French physicist André Ampère, in collaboration with his countryman François Arago, elaborated on his findings. In 1827 the German mathematician Karl Gauss and the German physicist Wilhelm Weber invented the first practical electromagnetic telegraph; and, as we shall see, in 1831 (W4) the English scientist Michael Faraday made the first dynamo, and laid the foundation for the development of practical electric motors and generators.

xxxxxIncidentally, the phenomenon of electromagnetism was first discovered in 1802, in fact, by an Italian jurist named Gian Domenico Romagnosi (1761-1835), but his finding was published in a little-known newspaper and went unnoticed at the time. ……

xxxxx…… In 1824 Oersted founded a society dedicated to the spread of scientific knowledge, and since 1908 this society has awarded the Oersted Medal to a Danish scientist who has made a significant contribution to science. ……

xxxxx…… The unit of magnetic-field strength, the oersted, was named after the Danish physicist in 1932. Prior to that it was known as the gauss. 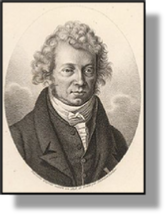 xxxxxOne of the most talented scientists to follow in the footsteps of Hans Oersted was the French physicist and mathematician André Marie Ampère (1775-1836). He elaborated on his findings, and by 1827 had published a series of papers and experiments on electromagnetism. It is perhaps not surprising that, despite the fact that Oersted discovered the phenomenon, it was Ampère who is generally regarded as the founder or father of this particular branch of science.

xxxxxAmpère was born near Lyon and showed an extraordinary talent in mathematics as a child. He survived the French Revolution, being 14 when it began, but his father, Lyon’s Justice of the Peace, was guillotined when the city fell to the revolutionaries. He was devastated by his father’s death, and did not return to his studies for eighteen months. He taught science locally until 1802, and then took up teaching posts, first at Bourg and then in Paris. In 1809 he was appointed professor of mathematics at the École Polytechnique and, beginning in 1824, taught physics at the Collège de France and philosophy at the Faculté des Lettres.

xxxxxIn a series of papers beginning in 1820 Ampère fully expounded the theory and basic laws of what he called electrodynamics (electromagnetism). Within a week of learning of Oersted’s discovery, he proved by experiment that two parallel wires carrying current in the same direction attracted each other, whilst currents travelling in opposite directions repelled each other. And from this finding he went on to demonstrate that the direction of the magnetic field is determined by the direction of the current.

xxxxxAnd he further showed, in collaboration with his fellow countryman and physicist François Arago, that an electric current passing through a solenoid (a coil of wire carrying direct current) had the effect of increasing the permanent magnetism of an iron needle situated within that solenoid. 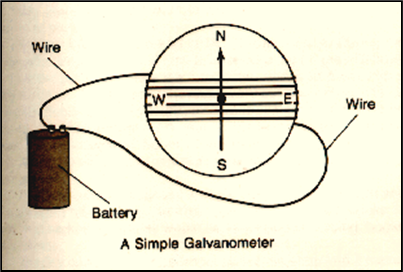 xxxxxToday, however, he is remembered above all for Ampère’s Law or Theorem, a mathematical equation which quantifies the relationship of the strength of a magnetic field to that of the electric current that produces it. And he was, too, the first person to devise a technique to measure electricity. He built an instrument which employed a free-moving needle to measure the flow of electricity, the forerunner of what came to be known as a galvanometer. And again, it was Ampère who was the first to demonstrate that magnetic force was, in fact, a circular force. Having made this discovery, it was to be the English scientist Michael Faraday, as we shall see 1831(W4), who was to grasp its implication and transform electrical energy into mechanical energy and the power that this was able to produce.

xxxxxHe wrote a book on the probability theory in 1802 (Considerations on the Mathematical Theory of Games), but his theories on electricity and magnetism were published in two later works, his Collection of Observations on Electrodynamics of 1822, and his Theory of Electrodynamic Phenomena four years later.

xxxxxIncidentally, the ampère (or amp), the unit for measuring electric current, was named after the French scientist. ……

xxxxx…… Ampère strongly supported the wave theory of light advanced by the French physicist Augustin-Jean Fresnel. They both became close friends, and Fresnel lodged at Ampère’s home from 1822 until his death in 1827. ……

xxxxx…… Amongstxother French scientists of the day who reacted quickly to Oersted’s discovery of 1820 were Jean-Baptiste Biot, a colleague of the chemist Joseph Gay-Lussac, and the physicist François Arago. The former, together with Felix Savart, produced the Biot-Savart Law that same year, defining the relationship between an electric current and the magnetic field it creates. And another was Siméon-Denis Poisson (1781-1840), a lifelong friend of the mathematicians Pierre Simon de Laplace and Joseph-Louis Lagrange. Like Ampère, he applied mathematics to electromagnetic theory, and wrote papers on both subjects.

xxxxxFollowing Hans Oersted’s discovery of 1820 concerning the relationship between electricity and magnetism, research in this field was ably continued by the French physicist and mathematician André Marie Ampère (1775-1836). He determined the direction of the magnetic field, and formulated Ampère’s Law concerning the strength of this field in relation to an electric current. He also built an instrument, the future galvameter, to measure the flow of electricity, and with the assistance of his fellow countryman François Arago, proved the value of the solenoid (a coil of wire carrying direct current). His conclusion that magnetic force was, in fact, a circular force, led to the transformation of electrical energy into mechanical energy by the English scientist Michael Faraday, accomplished, as we shall see, in 1831 (W4).

xxxxxThe German physicist Georg Simon Ohm (1789-1854) also did research into electricity. In 1825 he formulated the law named after him - Ohm’s Law - and published it in his major work, The Galvanic Circuit, two years later. This states mathematically that current is proportional to voltage and inversely proportional to resistance. The ohm, the common unit of electrical resistance, is also named after him. He worked on the staffs of the Polytechnic Institute, Nuremburg and Munich University, and he was made a member of the Royal Society, London, in 1842. 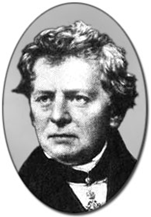 xxxxxAnother physicist who stamped his name on scientific data was the German Georg Simon Ohm (1789-1854). Like Oersted and Ampère, he also made a close study of electricity, and in 1825 came up with the law of electricity which bears his name - Ohm’s Law. He presented it in mathematical form in his major work Die Galvanische Kette (The Galvanic Circuit) of 1827. It states that current is proportional to voltage and inve

rsely proportional to resistance. The ohm, the common unit of electrical resistance, is also named after him, and the unit of conductance is called the mho, (ohm spelled backwards), though in many cases the term siemens has taken its place.

xxxxxBorn and educated in Erlangen, Bavaria, he was appointed professor of mathematics at the Jesuits’ College at Cologne in 1817, but he felt that his research there - which included the formulation of his law - was not sufficiently appreciated, and he resigned in protest. He became professor of physics at the Polytechnic Institute, Nuremberg, in 1833, and whilst there was awarded the Copley Medal of the Royal Society of London in 1841, and became a member of the society the following year. He joined the staff of Munich University in 1852.