xxxxxThe French neo-classical artist Jean Ingres, a protégé of the master painter Jacques Louis David, came to prominence in 1824. His religious painting The Vow of Louis XIII, exhibited that year, made him the guardian of traditional, academic values against the excesses of the Romantic Movement, led by his rival Eugène Delacroix. From then onwards he became France’s most celebrated artist. A painstaking stickler for detail, he was much influenced by Sanzio Raphael, placing great emphasis upon clear lines, and attempting to achieve well balanced, two-dimensional compositions, using cool, somewhat subdued colours. He is remembered above all for his sensuous nude studies, culminating in his circular masterpiece of 1863, The Turkish Bath, and, - as a draughtsman of outstanding merit - for his sensitive, realistic portraits. He produced portraits of Napoleon and the two French kings Charles X and Louis Philippe, but two of his best works in that genre were his Monsieur Bertin of 1832, and The Comtesse d’Haussonville of 1845. He also produced paintings on historical and religious themes, and recorded ceremonial events. He worked from his large, flourishing studio in Paris, but earlier in his career he spent some 25 years in Rome. His style influenced a large number of future French artists, including Edgar Degas, Pierre Renoir, Paul Gauguin, Henri Matisse, and Pablo Picasso. 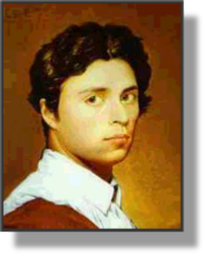 xxxxxThe French artist Jean Auguste Dominique Ingres, the most talented pupil of the neo-classical master painter Jacques Louis David, took some years to gain popular recognition. It was on returning from Italy in 1824 that his religious painting The Vow of Louis XIII - which he had rolled up and brought by hand from Rome - gained instant acclaim when exhibited that year. Above all, it was warmly welcomed by the critics for upholding the traditional, academic values in opposition to the emerging and disturbing innovations of the Romantic movement, led by his rival Eugène Delacroix and exemplified by his Massacre of Chios (on display at the same exhibition). Thus Ingres suddenly found himself the acknowledged leader of artistic classicism. Charles X personally presented him with the Cross of the Legion of Honour, and he was made a member of the Académie des Beaux Arts. With such credentials he was soon inundated with commissions and running a large and successful studio. (The self-portrait was painted in 1804.)

xxxxxIngres was born at Montauban, the son of an amateur artist and musician. He attended the Academy of Art in nearby Toulouse from 1791, and six years later entered the Paris studio of the great neo-classical painter Jacques Louis David. An industrious, dedicated pupil who took great care over his work, in 1801 he won the coveted Prix de Rome at his third attempt, impressing the judges with his The Envoys from Agamemnon, a flat, two dimensional study in the classical mode. Unable to go straight to Rome because of the lack of public funds, he began working in Paris, and in 1803 he was commissioned by the city of Liège to paint a portrait of Napoleon, then First Consul. He followed this in 1806 with his famous portrait of the Emperor dressed in ermine robes, wearing a Roman-style crown and seated on a ceremonial throne. Neither work was particularly well received. Later he was to produce portraits of other French rulers, including those of Charles X and Louis Philippe. 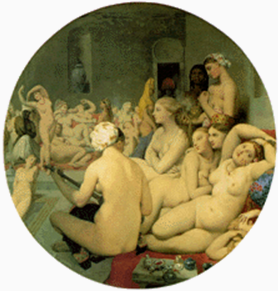 xxxxxHe eventually went to Rome in 1806, and remained studying and working there for fourteen years. He was particularly influenced by the work of the Italian painter Sanzio Raphael, to be seen especially in his balanced composition, clear lines and the coolness of his colours, and it was in these years that he gained a reputation as a remarkably accomplished draughtsman. To this period belongs two large historical canvases, produced in 1812, his The Dream of Ossian (thoroughly romantic, in fact, in subject and style), and Roger Freeing Angelica, based on a work by the Italian poet Ariosto, and the first of his famous oriental nudes, The Valpincon Bather of 1808, and La Grande Odalisque of 1814. This series of sensuous, idealized studies of the female body, full of grace and beauty despite some physical distortion, was enriched many years later by his two major works, Odalisque with Slave of 1842, and his circular masterpiece The Turkish Bath (illustrated), completed at the age of 82.

xxxxxIn 1814, however, with the collapse of the Napoleonic Empire, his own fortunes took a tumble. Lucrative commissions, mainly portraiture, quickly dried up, and he was forced to earn a living by making drawings of the countless English tourists who, now able to travel on the continent, flocked to Rome. He regarded such work as belittling but, in fact, these superb pencil drawings have proved almost without equal for their delicacy, their clarity of line, and their precise, accurate portrayal of character and social standing. In 1820 he moved to Florence. Here he painted a number of portraits and general scenes, but these only marginally improved his meagre income. As we have seen, it was not until 1824, on returning to Paris with his latest canvas, The Vow of Louis XIII - commissioned for Mantauban cathedral - that his career took a sudden and dramatic change for the better.

xxxxxSettled comfortably in Paris, it was in 1827 that he received one of his first major commissions, The Apotheosis of Homer, a beautiful painting for a ceiling in the Louvre. This truly marked him out as the champion of Classicism. Two years later he was appointed professor at the École des Beaux Arts, but criticism of his next work, the Martyrdom of St. Symphorian, prompted him to leave Paris. He returned to Rome in 1834 where he became director of the French Academy there, a post he held with distinction for seven years. One of his major works during that period was his Antiochus and Stratonice, a scene from the classical world which has not been surpassed for its detailed accuracy. Notable, too, was his brilliant portrait of Monsieur Bertin. Painted in 1832, and now in the Louvre, Paris, it is considered by many to be one of the finest portraits of the century (illustrated).

xxxxxIngres returned to Paris in 1841 and was given an enthusiastic welcome. He was wined and dined by many of his admirers, invited to dinner by King Louis Philippe, and the French composer Hector Berloz arranged a concert in his honour. The next 25 years were highly productive, and were noted above all for his highly detailed and refined portraits, amongst them being the delightful The Comtesse d’Haussonville in 1845 (illustrated), and Madame Moitessier in 1856. In 1853 he was commissioned to paint his Apotheosis of Napoleon I. Produced for the Town Hall in Paris (but destroyed in 1871), Napoleon III and the Empress Eugénie visited his studio to see the completed work. 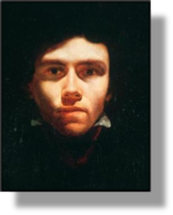 xxxxxThroughout his long career his work covered a wide variety of subjects. Apart from his beautiful nude studies and his brilliant portraits, he produced religious and historical paintings and covered a number of ceremonial functions. In all his work, his method of painting was painstakingly meticulous. He would make many preliminary copies in order to achieve the highest standard, being, as he himself put it, “incapable of any kind of compromise with bad taste”. And as a classicist he laid great stress on line and contour, sought to produce carefully balanced, two-dimensional compositions, and employed cool, flat colours, all finely graded in tone. It is in no way surprising, therefore, that he should be at odds artistically and temperamentally with his spirited Romantic rival Eugène Delacroix (illustrated), a man who delighted in bold, vibrant colours to capture the dramatic moment or the exotic event. The enmity between them, starting around 1824, grew in intensity with the years. Ingres, for his part, saw such works as adding to the flood of “modernistic extravagances”, whilst Delacroix saw Ingres’ paintings as “the complete expression of an incomplete intelligence”. Such was the width of this somewhat artificial divide that in 1855, at the Universal Exhibition in Paris, both artists were given a room apart to exhibit their works, a separation in space as well as in style.

xxxxxIllustrated here are a drawing of the Italian violin virtuoso Nicolò Paganini, and his paintings: The Virgin of the Host, Madame Ingres, and Half-figure of a Bather, produced in 1807.

xxxxxIncidentally, among his earlier works which were not too well received was his portrait of Emperor Napoleon, dressed in ermine and seated on his ceremonial throne. This work of 1806 was later dubbed 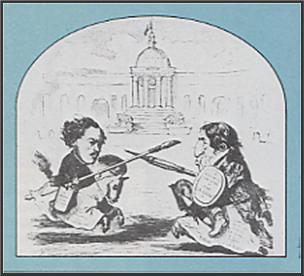 Napoleon mal-Ingre, a clever play on the artist’s name, inferring that the Emperor looked like a sick man - malingre meaning frail or fragile looking. Likewise, because his colours were subdued - and particularly so in contrast to those of his rival Delacroix - he was sometimes referred to as en gris, meaning “in grey” or colourless. ……

xxxxx…… His “battle” against Romanticism is illustrated here by way of a cartoon. On the right Ingres wields a fine pen in his fight for the “line”, whilst Delacroix supports “colour”, armed with a broad brush. ……

xxxxx…… Ingres was also an accomplished violinist and, during his second stay in Rome, he took part in a number of concerts. During these occasions he more than once accompanied the French composer Charles Gounod when he was playing the piano. His pencil drawing of the young composer, made in 1842, is now in the art institute of Chicago. So skilled was Ingres on the violin that the French expression violin d’ 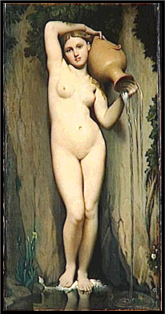 Ingres means a particular skill that a person practises in his or her spare time. ……

xxxxx…… When Ingres died in 1867 he bequeathed the contents of his studio to the Ingres Museum, which had been founded in his native city of Montauban in 1843. This included some 4,000 of his work drawings, sketches and studies, numerous paintings - including The Dream of Ossian - and, among other memorabilia, his palette and violin. ……

xxxxx…… His delight in portraying sensuous nudes has raised the suspicion that, pillar of the community though he was, Ingres was also something of a voyeur. Be that the case or not, we are indebted to him for producing some of the most beautiful paintings of the female form, as seen in this painting entitled La Source.