xxxxxThe Monroe Doctrine was proclaimed in 1823. By that year, as we have seen (1810 G3c), most of the colonial territories of Latin America had gained their independence from the Spanish, due in large measure to the efforts of freedom fighters such as O’Higgins and San Martin. In Europe, however, as we have seen, the Holy Alliance was bent on crushing revolutionary movements, and there was talk, notably at the Congress of Verona, that its leading members, Austria, Russia and Prussia should assist Spain in the task of re-establishing its authority in the New World. Such an idea alarmed the United States, especially as earlier, in 1821, Russia had laid claim to the American Pacific coastline as far south as California (then Mexico). In 1823 the American president, James Monroe issued a declaration (the Monroe Doctrine) making it clear that any further colonial ambitions in the western hemisphere would be seen as a threat to the security of the United States. Britain, for commercial reasons, strongly supported this declaration, and was able to provide the sea power which made it viable. As a result, a crisis was averted. The immediate effect of the Monroe Doctrine, which had no validity in international law, was to strengthen the rapport between the United States and the emerging republican states in South America. It later came to be a tenet of American foreign policy, and was used by President Theodore Roosevelt in the early years of the 20th century. By then, the US navy was well able to enforce it. 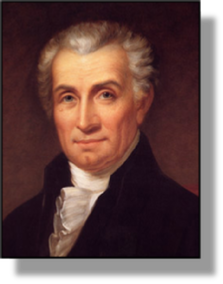 xxxxxThe Monroe Doctrine was proclaimed in 1823. By then, the Congress of Verona in 1822 and, to some extent, the earlier one at Troppau, had alarmed the American government. It feared that the declared intention of the Holy Alliance to uphold the old colonial regimes, - clearly spelled out at Verona - was a real threat to the stability of South America. By then, as we have seen (1810 G3c), many of the South American states - including Argentina and Chile - had thrown off their colonial master, Spain - due in large measure to the skill and determination of freedom fighters like O’Higgins and San Martin. But the Spanish had not gone without a fight and, indeed, the reinforcements they had sent out earlier, in 1815, was considered to have been the strongest military force ever to have crossed the Atlantic. There was a real fear that the Holy Alliance (Russia, Prussia and Austria), might well assist Spain (and France and Portugal for that matter) to re-establish or hold onto their colonial territories in the New World - in America’s “backyard”.

xxxxxAnd there was, too, at this time, another matter troubling the US government. In 1821 the Russian Tsar had announced that all the region north of the 51st parallel and stretching one hundred miles into the Pacific was to be regarded as Russian territory. Such a claim, extending, as it did, Russian influence down the Pacific coast from Alaska to California (then owned by Mexico), was rejected by the Secretary of State, John Quincy Adams, but it was thought that a stronger stand needed to be made. 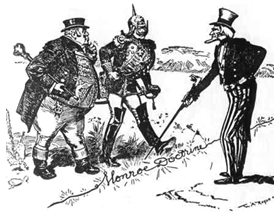 xxxxxIn response, therefore, to these conceived dangers, in December 1823 the US president, James Monroe, openly declared that any further colonial ambitions in the western hemisphere on the part of any European state would be seen as a threat to the peace and security of his nation. This declaration, which came to be known (much later) as the Monroe Doctrine, sent out a clear message, “Hands off the Americas!” In return for compliance, the United States pledged that, in its turn, it would not interfere in the affairs of Europe, nor in those of colonial territories already existing in the western hemisphere.

xxxxxAt this particular time, it must be said, the United States was by no means powerful enough to enforce so ambitious a policy. However, the British supported the doctrine, and, as we saw at the Congress of Verona, were willing to use their considerable sea power to ensure that it was enforced. They took this line in the main because they feared that a resurgence of French and Spanish colonialism in the Americas would adversely affect their trade in the area, particularly with Latin America. Britain was fast becoming the world’s greatest trading nation, and the government wanted to keep it that way. Indeed, such had been Britain’s concern over this matter that it had been the British foreign secretary, George Canning, who had made the first move, suggesting a joint declaration by London and Washington on the lines of the Monroe Doctrine. But when the US government discussed the suggestion it was Adams - the real architect of the declaration - who persuaded Monroe to go it alone. This would be more straight forward and more dignified, he argued, than to be seen as “a cockboat in the wake of the British man-of-war”.

xxxxxAs it so happened, the crisis passed and the Monroe Doctrine remained a paper threat. Its only immediate effect was to strengthen the rapport between the United States and the emerging republics of Latin America. It has no validity in US or international law, but nevertheless it has become a basic tenet of US foreign policy over the years, and was called upon by President Theodore Roosevelt during the early years of the 20th century. By then the US navy was well able to enforce it. 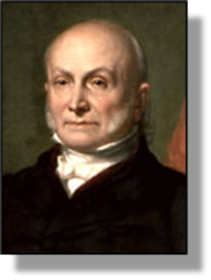 xxxxxJohn Quincy Adams (1767-1848) had a distinguished career as an American diplomat, and served as president of the United States from 1825 to 1829. He was one of the negotiators at the Treaty of Ghent, which ended the War of 1812, and in 1818 he concluded the treaty with Great Britain which established the northern boundary of the United States along the 49th parallel from the Lake of the Woods to the Rocky Mountains. Inxthe following year he took a leading part in the purchase of Florida from Spain, and negotiated the border settlement with Spanish Mexico. By this agreement, known as the Transcontinental Treaty, the US conceded what is now Texas but, in return the Spanish abandoned all claims to land east of the Mississippi (Florida) and, in addition, to the Oregon Country in the west, a concession which, for the first time, gave the United States a continuous boundary from the Atlantic to the Pacific. Throughout his career he was an ardent defender of free speech, and a strong supporter of the anti-slavery movement. 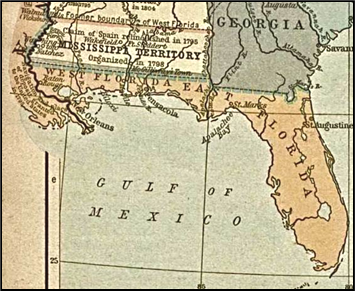 xxxxxIncidentally, Adams’ purchase of Florida from the Spanish in 1819 was made the easier by the First Seminole War which took place over the two previous years. As we have seen, in this conflict between the US government and Creek Indians known as the Seminoles (“runaways”), American troops occupied Spanish territory in Florida, and this put pressure on the Spanish to give up their holdings in the peninsula in exchange for recognition of their sovereignty over Texas. ……

xxxxx…… Byxthe year of the Monroe Doctrine, a number of new states had been admitted into the United States. These included Ohio, Louisiana, Indiana, Mississippi, Illinois and Alabama. In 1919, however, a request by the territory of Missouri (acquired by the Louisiana purchase of 1803) to join the Union as a slave state brought opposition from the Northern non-slave states. Eventually, by what came to be known as the Missouri Compromise of 1820, Missouri was admitted to the Union, but, at the same time, the free territory of Maine was also admitted, and slavery was prohibited in all the remaining area of northern Louisiana. This proved a solution of sorts, but the deep-rooted sectional antagonism that it revealed marked the beginning of a conflict over slavery that was to lead to the American Civil War in 1861 (Va).