xxxxxThe Congress of Troppau was convened by the Holy Alliance in 1820 following popular uprisings in Spain, Naples and Portugal. The aim of the three leaders, Austria, Russia and Prussia, was to suppress any liberal or national movements inside Europe. States were encouraged to intervene in the affairs of another country, using force where necessary, to overthrow any subversive elements. Britain and France were opposed to such repressive measures, and at the Congress of Verona two years later Britain left the Alliance, threatening to use its navy to block any aid sent in support of reactionary governments in South America. This virtually put an end to the Congress System, though a measure of international consultation did continue into the 20th century. In the meantime, the nationalism born of the French Revolution and widened during the Napoleonic Wars grew in strength. As we shall see, in 1830 (W4) uprisings broke out in a number of countries, one of which overthrew the French monarchy, and 1848, the Year of Revolutions, saw a series of rebellions across Europe. None proved fully successful, but the stage was set. 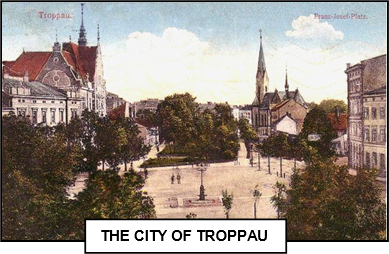 xxxxxThe Congress of Troppau, convened in October 1820, was the second of four meetings called around this time on behalf of the Holy Alliance, the four-power treaty set up, as we have seen, by Tsar Alexander I in 1815 (G3c), soon after the Vienna peace settlement. These meetings, starting with the one at Aachen in 1818, were used by the leading members of the Alliance (Austria, Russia and Prussia) as a means of stifling at birth any liberal or national movements inside Europe. A widespread revolt in Spain in February 1820, followed by uprisings in Naples and Portugal had alarmed the reactionary powers and they met at Troppau, in Silesia, to bring the rebels to heel.

xxxxxIn November, those present signed the Troppau Protocol, an agreement to take collective action against any country that attempted to overthrow its legitimate government - i.e. that government which had been recognised by the conservative settlement adopted at the Congress of Vienna. It further allowed any European state to intervene in the affairs of another country, using force if necessary, to overthrow any subversive elements. But such measures, repressive in the extreme, marked the beginnings of a split in the Holy Alliance and the Congress System it attempted to uphold. The protocol 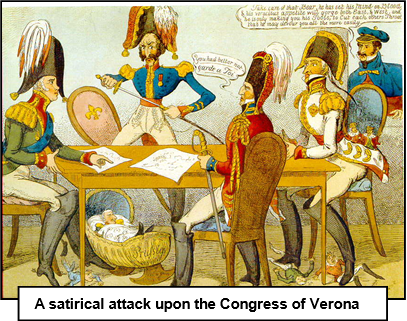 was agreed in person by Francis I of Austria, Alexander I of Russia, and Frederick William III of Prussia, but both Britain and France, having sent observers to the meeting, opposed this agreement. For them, this blank cheque to counter and silence national aspirations, regardless of the circumstances, was totally unacceptable. Andxthe split widened to a complete break two years later when, at the Congress of Verona, Britain withdrew from the Holy Alliance altogether, after making clear that it would use its navy to stop any support reaching reactionary regimes in South America. The Congress system was virtually at an end, but, as we shall see, the very idea of further colonialism in the western hemisphere alarmed the United States, and led to the Monroe Doctrine of 1823.

xxxxxConsultation between states, though not always successful, did continue to play a limited part in European politics into the 20th century, but in the meantime the militant nationalism which had burst out under the pressure of the French Revolution, and then spread across Europe during the Napoleonic Wars, was not going to be easily suppressed. In 1820 minor revolts occurred in Spain, Naples and Portugal - and later Italy -, and, as we shall see, in 1830 (W4) rebellions broke out in a number of countries, including the overthrow of the Bourbon king of France in favour of a constitutional monarchy. 1848, the so-called Year of Revolutions, was to witness a series of revolts against established governments. None proved truly successful, but the wind of change had started to blow yet again.