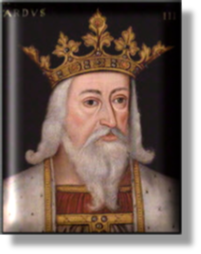 xxxxxAs we have seen, Edward II’s reign came to an end in 1327 after he was deposed and imprisoned by his estranged wife Isabella and her lover Roger Mortimer. His son was crowned as Edward III in January of that year, but he was only fifteen so for the next three years the government was in the hands of his mother Isabella and Mortimer, now Earl of March.

xxxxxIn 1330, however, Edward III suddenly seized power, and then lost no time in having Mortimer executed, the man who had betrayed his father and doubtless instigated his murder. It was Mortimer, of course, who, two years earlier, had persuaded the young Edward to recognise Scottish independence via the humiliating Treaty of Northampton. Edward now set out to reverse this agreement. A struggle for succession having broken out following the death of Bruce in 1329, he crossed into Scotland with a huge army in 1333 to support John Balliol, one of the claimants. The result was a victory at the Battle of Halidon Hill by which Edward secured authority over the southern part of Scotland.

xxxxxNow the young, energetic Edward was free to challenge for a far greater prize. He had a strong claim to the French throne via his mother, Isabella (daughter of Philip IV of France), and he was anxious to fight for what he considered to be his inheritance. In 1337 he was provided with a ready excuse to intervene when the French king, Philip VI, threatened Guyenne, part of the English possessions in south-west France. This, together with the fact that France was helping Scotland in their struggle for independence, spurred Edward into action. He at once laid claim to the French throne and embarked on the first phase of that long, intermittent struggle which eventually came to be known as the Hundred Years’ War.

xxxxxWith the active support of his son Edward, known for his battle prowess as the Black Prince, he won a series of sensational victories, including the naval Battle of Sluys in 1340 (when the French fleet was virtually destroyed), the Battle of Crécy in 1346, the capture of Calais, a year later, and the Battle of Poitiers in 1356, during which the French king, John II, was captured. A further expedition by Edward ended in failure, however, and in 1360, running seriously short of money, he agreed to the Treaty of Brétigny, giving up his claim to the French throne but, in return, being granted sovereignty over the whole of Aquitaine.

xxxxxBy 1360, success on the battlefield had restored English prestige and regained lost land in France, but it was about this time that matters took a serious turn for the worse. In Scotland, despite the English victory at Halidon Hill, and a further defeat of the Scots at the battle of Neville’s Cross in 1346, John Balliol had been deposed and the movement for independence remained very much alive. Meanwhile in France, the new king, Charles V, renounced the Brétigny agreement and once again English possessions in the south-west were in danger. Against a rising tide of French nationalism, an expedition led by Prince Edward, the Black Prince, and his brother, John of Gaunt, ended in failure and this was followed by a violent revolt against English rule in Aquitaine. Then in 1370 Prince Edward, by this time a sick man, allowed his army to run amok in the town of Limoges and this virtually put an end to any hope of a favourable settlement. 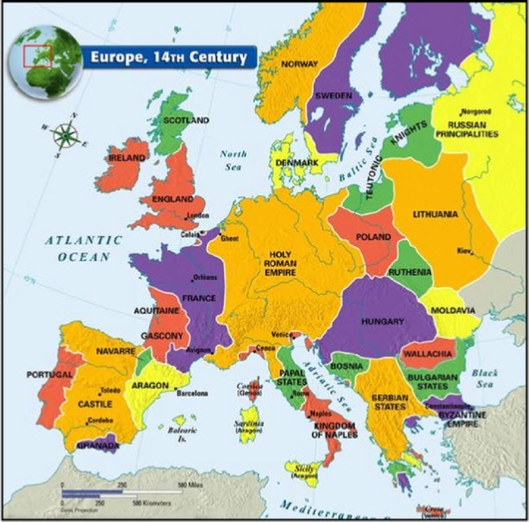 xxxxxEventually a truce was reached at the Treaty of Bruges in 1375, but by then the French had slowly nibbled away at most of Aquitaine, and the only English possessions of any importance in France were Calais, Brest, Bayonne and Bordeaux. The following year, Prince Edward died of an illness he had contracted during a short campaign in Spain, and by this time, too, the king had become senile and his unpopular son John of Gaunt was ruling the country. Thus a reign which had opened with such promise, with its victories on the battlefield and Edward’s glittering court, had little to show for itself when it petered out with the king’s death in 1377.

xxxxxNor, it must be said, was there much comfort to be gained at home. In church affairs, there was growing hostility towards the papacy at Avignon - a virtual puppet of the French government - and towards the higher clergy at home, enjoying as they did a life of privilege and wealth. The Statutes of Provisors and Praemunire were passed in the early 1350s to reduce the power of the pope in state affairs, and Edward was not averse to seizing church funds to help finance his war efforts. Opposition to the belief and practices of the church was championed at this time by the great preacher John Wycliffe, the “morning star” of the Reformation.

xxxxxThere was a measure of commercial prosperity in the early years of the reign, particularly in the wool trade, but the good times were not destined to last. The Black Death, beginning in 1348, killed off one third of the population and brought immense misery, hardship and social unrest, particularly amongst the peasantry. The feudal system went into rapid decline and hastened the beginning of a money economy. The Statute of Labourers in 1351 attempted to maintain prices and wages but proved almost impossible to enforce.

xxxxxFurthermore, Edward’s constant need for money to finance his expeditions to the continent brought about the inevitable clashes with Parliament and a consequent growth in its authority, particularly in the last years of the reign. The Good Parliament of 1376, for example, was the first to impeach a King’s Minister (the Chamberlain William Latimer), and the first to elect a Speaker, one Peter de la Mare. And by now, Parliament had become two chambers, with representatives of the shires and towns meeting together in a separate house - the Commons.

xxxxxAt one time it was feared that John of Gaunt was planning to seize the throne on the death of his ailing father. When the king died, however, in June 1377 he was succeeded by his ten-year-old grandson Richard, son of the Black Prince, though, as we shall see, John of Gaunt did remain a power in the land and something of a thorn in Richard’s flesh.

xxxxxIncidentally, it was Edward III, renowned throughout Europe for his glittering court, who, as we shall see, instituted The Most Noble Order of the Garter in 1348.