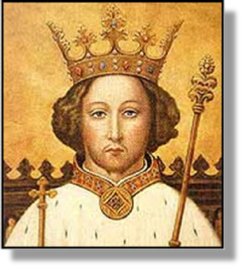 xxxxxBorn in Bordeaux, the son of Prince Edward, the Black Prince, and Joan, the Fair Maid of Kent, Richard II succeeded his grandfather at the age of ten. For some years the country was governed by a council made up of twelve men, but the king’s uncle John of Gaunt still played a dominant role in state affairs. This Minority Council was beset by internal feuds, and its misrule doubtless contributed to the universal discontent which sparked off the Peasants’ Revolt just three years into the reign.

xxxxxFollowing the death of his mother in 1385, his decision to govern alone, and his fondness for shallow favourites, notably the Earl of Oxford (Robert de Vere) and his chancellor the Earl of Suffolk (Michael de la Pole), brought him into direct conflict with Parliament, particularly with the baronial party. When John of Gaunt visited Spain in 1386, the knives came out. Suffolk, the king’s chancellor, was impeached and then in 1388, through the Merciless Parliament, as it was aptly called, a group of the king’s leading opponents, known as the Lords Appellant and led by the Duke of Gloucester, had a number of the king’s closest friends exiled or executed on charges of treason.

xxxxxMeanwhile, in the country at large, there was grave social unrest and civil strife, caused in many respects by a complete lack of firm leadership. Taxes were exceedingly heavy in order to pay for the continuing war with France, and a further outbreak of the plague added to the general discontent. The Peasants’ Revolt of 1381 came close to an all-out revolution, and might well have come to that had it not been for the bravery and duplicity of the young king himself. He had the courage to face the mob, and the guile to make promises of reform which he had no intention of keeping. Nor was the social climate improved by the Lollards, followers of the church reformer Wycliffe, who went about the country denouncing, among other things, war, capital punishment and allegiance to the Roman Catholic faith.

xxxxxEvents leading to the end of this unhappy reign began in 1397. Having gradually built up a royalist faction amongst his nobles, Richard now felt safe enough to wreak his revenge. Once again he assumed absolute power, and arresting Gloucester, had him imprisoned at Calais. He died there, probably murdered. He then had the Earl of Arundel executed, and exiled many of his other opponents, including John of Gaunt’s son, Henry Bolingbroke, one of the Lords Appellant. Thus when John of Gaunt died in 1399, Richard saw fit to confiscate all his lands in Lancashire.

xxxxxNow fully in control and with old scores settled, the king felt sufficiently secure to lead a military expedition to Ireland to restore English authority - he had led an earlier campaign in 1394. This proved his downfall. While he was in Ireland, Bolingbroke landed in England and, amid popular support, led a formidable army to Wales. When Richard returned he was captured at Flint, brought captive to London, and forced to abdicate, reading aloud a confession of his own “insufficiency and uselessness”. Parliament confirmed Henry Bolingbroke as King Henry IV, and Richard was imprisoned at Pontefract Castle where he died the following year, possibly by starving himself to death, but more likely murdered. A reign which had been bedevilled by every kind of crisis - social, economic, political and constitutional - was thankfully at an end.

xxxxxIncidentally, in his play Richard II, Shakespeare has the king murdered, but that might well have been in the interest of a dramatic ending! ……

xxxxx…… In 1393 Richard II passed an act making it compulsory for pubs and inns in England to display a sign, his own symbol being a picture of a white hart. This was to identify the establishment for the official “Ale Taster”, and any landlord failing to comply with the act would “forgoe his ale”. Later, at the time of the Reformation, crossed keys became a popular sign (the emblem of St. Peter), and in 1603, when James I became king of England, he decreed that the heraldic red lion of Scotland had to be displayed on all buildings of public importance, including taverns.