xxxxxAs we have seen, by 1241 (H3) the Mongol leader Batu had advanced deep into Eastern Europe, posing a serious threat to the continent, but, with the death of the Mongol Emperor, he abandoned his campaign and returned to southern Russia. There he established a vast army known as the Golden Horde. Over the next hundred years this force extended its control over most of European Russia, but, following the ravages of the Black Death in 1346, a power struggle broke out. An alliance of local Russian princes was formed, and in 1380, somewhat surprisingly, it won a resounding victory over the powerful Golden Horde at the Battle of Kulikovo. The Russian success was short-lived, but the triumph at Kulikovo proved a turning point in the struggle to overthrow the power of the Mongol Empire.

xxxxxAs we have seen, by 1241 in the reign of Henry III, the Mongol leader Batu, grandson of Ghengis Khan, had ventured into Europe. By 1241 he had conquered western Russia, including the cities of Kiev and Moscow, and advanced into Poland, Hungary and the Danube valley, burning, pillaging and killing as he went. The western states of Europe were ill-prepared for an army of this size and ferocity but, fortunately for them, their armies were not put to the test. In that year Ogodei, the Mongol emperor, died, and Batu hurried back home to take part in the struggle for succession. He never returned to the west, but established a vast army in southern Russia known as the Golden Horde (or the Khanate of Kipchak). 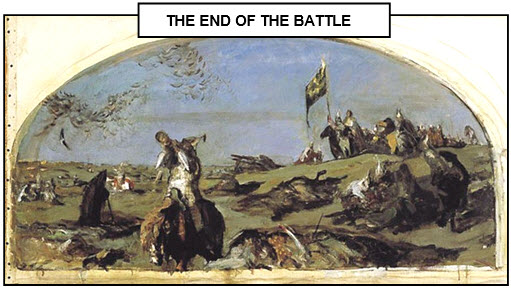 xxxxxBatu died in about 1255. Over the next hundred years his successors continued to expand the Horde’s territory. At its height it included much of European Russia, and stretched from the Black Sea and the Caucasus Mountains in the south-west to the Urals and Siberia in the north-east. But many within the empire, like the Russians, Greeks, Georgians and Armenians, were subject people and simply paid tribute to their Mongol masters; they were not integrated within the empire as such. Thus in 1346, when the ravages caused by the Black Death began to be felt, and a power struggle broke out within the higher ranks, the empire began to disintegrate. Abundant proof of this decline came in 1380 with the defeat of the Golden Horde (sometimes known as the Tatars) at the Battle of Kulikovo. Illustrated here is a scene at the end of the savage encounter.

xxxxxThe man who achieved this remarkable victory at Kulikovo was the prince of Moscow, Dmitry (II) Donskoy. Having formed an alliance of local princes he stopped making tribute payments to the Mongols and when they sent in an army to collect their dues, he led a force against them. Both sides met at Kulikovo Pole on the River Don, and the Russians, due to the military skill of their leader, won the day. For his services, Ivanovich was honoured with the title Donskoy (“of the Don”). However, the triumph was short- lived. Two years later the Mongols sacked and burned Moscow. Nonetheless Kulikovo was a turning point. As we shall see, in 1395 the brutal leader Tamerlane, himself a Mongol, began the conquest of the Golden Horde. With its eventual break-up, the Russians were to emerge as the ultimate victors, beginning, as we shall see, with the victory of Ivan III over his Mongol overlords in 1480 (E4). 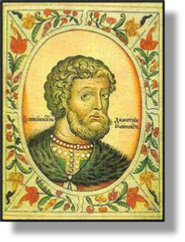 xxxxxThe man who won this remarkable victory at Kulikovo was Dmitry (II) Donskoy, Grand Prince of Moscow from 1359 to his death in 1389. He formed an alliance of local princes and stopped making his tribute payments to his Mongol masters. Mamai, the general ruling over the western section of the Horde, promptly invaded the Russian lands to sort the matter out. Normally, any resistance would have been ineffective. On this occasion, however, a Russian force under the leadership of Dmitry, met the Mongols face on at Kulikovo Pole (Snipes’ Field) on the River Don. In the bloody battle which ensued, the Russians won a resounding victory. At the height of the conflict Dmitry sent in a body of reserves, and the Horde gave way and fled. It was a victory to be savoured, and the Russians honoured the Prince of Moscow by giving him the name Donskoy - meaning “of the Don”.

xxxxxUnfortunately for the Russians, their triumph was short-lived. Mamai’s successor, Tokhtamysh, took revenge for the defeat two years later. He invaded with a large force, sacked and burned Moscow, and re-established the Horde’s authority. Nonetheless, the Battle of Kulikovo can be seen as a turning point. As we shall see, in 1395 the brutal leader Tamerlane (also known as Timur), himself a Mongol warrior, began the conquest of the Golden Horde and, after his death in 1405, it slowly broke up into a 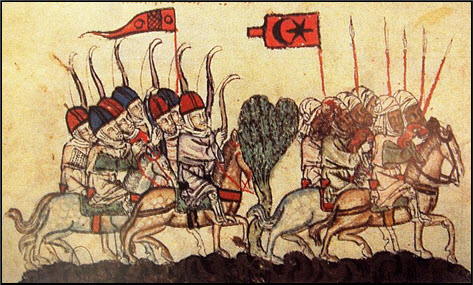 number of small Khanates, the most important being Astrakhan, Kazan, Sibir and the Crimea. The Russians, the ultimate victors, conquered the first three in the sixteenth century, whilst the Crimea became a vassal state of the new giant on the world stage, the Ottoman Empire. As we shall see, the rise of Russia was to begin in 1480 (E4). In that year Ivan III refused to pay tribute money to his Mongol overlords, defeated them in battle, and set his country on the road to power, prestige and nationhood.

xxxxxWith the advantage of hindsight, it may well be that the Golden Horde made a serious mistake in turning their back on Western Europe. This area would certainly have provided better pickings than the deserts of Turkestan or the wastelands of Siberia. Furthermore, by so doing, they allowed the Russian princes to become more independent and to grow in strength and daring. It was they, in the end, who devoured most of what was left of the Horde when it broke into pieces. Certainly, history would have been very different had the Mongols swept into western Europe in the fourteenth century like the Huns had done before them in the fourth and fifth.

xxxxxIncidentally, the description “Golden” is said by some sources to derive from the bright colour of the tents used by the Tatars. Others, however, suggest that it refers to Batu’s own tent which, we are told, was made out of silk and beautifully embroidered in bright colours. You may take your pick, but probably the second explanation is the more likely!