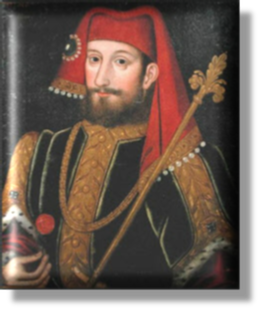 xxxxxAs the first Lancastrian king, Henry IV’s reign was a troubled one, and that was hardly surprising. First and foremost, however popular he might be, he was a usurper, having seized the throne from the lawful king by force of arms. As a consequence within months of his coming to power a group of barons loyal to Richard II sought to overthrow him. Furthermore, he had seized the throne as the son of John of Gaunt, but there were others, notably the children of his father’s older brother, the Duke of Clarence, who had better claims to the crown. Therein lay present and future trouble.

xxxxxTo make his position safer, Henry disposed of Richard in February 1400, thus removing the focus of the rebellion, but he was soon faced with a serious challenge from the Earl of Northumberland and his son Henry Percy, known as Hotspur. Having first supported Henry and defeated the invading Scots at the battle of Homildon Hill, the Percys now turned against him, making an alliance with the Scots and adding their forces to a Welsh rebellion led by Owen Glendower and supported by French troops. Civil war followed and two major battles had to be won, those of Shrewsbury and Bramham Moor, before Northumberland and his son had been killed and internal threats from the barons, the Welsh and the Scots, had been mainly overcome. 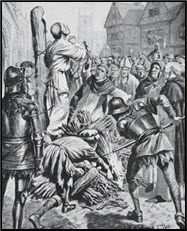 xxxxxBut if, by February 1408, following his victory at Bramham Moor, Henry’s position was more secure, it had been obtained at a price. In order to keep in power he had been obliged to agree to the Church’s demand for the burning of heretics - necessary, it was argued, to eradicate the heretical Lollards - whilst in his dealings with Parliament he had been forced to make a number of concessions over royal appointments and crown expenditure. It is little wonder that the on-going war with France received little attention, and when it did, England, because of rival factions, ended up briefly supporting both sides of the civil war that was going on there!

xxxxxThe last years of the reign were marked by a bitter power struggle between rival groups of barons, each vying for dominance. Meanwhile, because of the king’s ill-health - thought to be leprosy - the government of the country fell into the hands of his son, Prince Henry, or his chancellor, Archbishop Arundel, up until his death in March 1413. The fact that, in his early years, Henry had managed to survive the furious onslaught arising from conspiracy, rival claimants, and armed rebellion must say something for his fighting spirit, but his reign did very little to address the social and economic problems besetting the country.

xxxxxPerhaps more important, however, were the long-term consequences of this reign for the nation in general and the House of Lancaster in particular. As we shall see, the descendants of the Duke of Clarence, mindful that Henry had deprived them of their royal inheritance, were going to be more than willing to support the House of York when the Wars of the Roses came along in 1455 (H6), and the battle lines were drawn up.