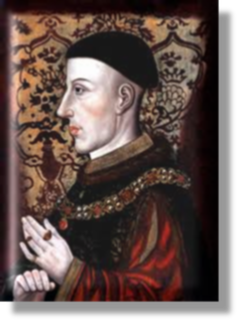 xxxxxLong before Henry V came to the throne he had gained a reputation as a good military tactician and an outstanding leader of men. He had fought against the Welsh rebels, campaigned against the Percys of Northumberland, and had already led an expedition to France. It was inevitable that this experienced soldier, on coming to the throne, would seek to revive England’s fortunes and prestige on the continent. The renewal of the Hundred Years’ War was about to take place.

xxxxxAs a man, Henry was intolerant and domineering, but he was every inch a king, brave, loyal and decisive. He was undoubtedly a popular monarch. Having a reasonable claim to the French throne, aware that France was split by civil war, and knowing that the promise of continental gains tended to ensure the loyalty of his noblemen, he embarked almost at once upon a campaign of conquest. By his famous triumph at the Battle of Agincourt and a string of minor victories a few years later, he overran Normandy and captured Rouen after a long siege. Such was the measure of his success that in 1420 the Treaty of Troyes recognised him as heir to the French throne and, later that year, he married Katherine, the daughter of the French King. But the Dauphin, the rightful heir to the French throne, was not a party to the treaty and so the fighting continued. Then two years later, soon after raising the siege of Meaux in the Loire Valley, Henry was taken ill and died. With him died the hopes of an English king on a French throne. 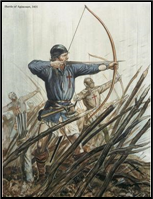 xxxxxIt is certainly true that, because of his success on the battlefield, his reign did much to restore good relations between the monarch and his nobles. Indeed, as early as his coronation, he had gone out of his way to make peace with many of those barons who had suffered at the hands of his father. Furthermore, as an act of reconciliation, he had had the body of Richard II removed from its humble grave and reburied in Westminster Abbey. Unfortunately such unusual harmony was not to last beyond his death. Furthermore, conquest abroad did not automatically make the reign a success. On the continent, he made England the most powerful nation in Europe, but in fact his reign was little short of a disaster. The campaigns in France, apart from the enormous burden of taxation they caused, created an empire which, in reality, was going to be too difficult to maintain, let alone retain. A few years after Henry’s death most of his possessions in France had been overrun.

xxxxxAt home, too, Henry’s long periods of absence meant a lack of leadership where it was most needed. There was still much disquiet about the Lancastrian succession, notably in the west and north of the country, and the Lollards - making much capital out of the Great Schism - were stirring up a great deal of unrest by their opposition to the papacy. The execution of their leader Sir John Oldcastle in 1417 did not crush the movement, but served only to drive it deeper underground. Furthermore, just before he left for France in the summer of 1415, he was faced with a serious conspiracy. He learnt of a plot to replace him with Edmund Mortimer, Earl of March. He swiftly searched out and executed the conspirators, but this event was a measure of the unrest simmering just beneath the surface.

xxxxxHis remarkable success at the Battle of Agincourt brought him personal fame and what today would be termed “international status”. The German king himself, Sigismund, visited Canterbury in 1416 to make an alliance, and later, in the Council of Constance, it was the co-operation between these two monarchs that paved the way for the acceptance of a new pope and the end of the Great Schism.

xxxxxBut the long campaigns on the continent put an enormous strain on the king, young though he was. Henry had laid claim to vast areas of France at the start of his first campaign, and despite his victory at Agincourt, his aim was not to engage the French in pitched battles, but to conquer enemy territory by a series of sieges. Once captured, the great towns and fortresses of northern France were used to subdue and rule over the surrounding countryside. It was a strategy that he carried out for seven arduous years and which, by 1422, had left him physically exhausted. Thus, at the height of his career and with the throne of France within his grasp, he was suddenly weakened by dysentery and died at the chateau of Vincennes in the Loire Valley. He was just 36 years of age. England had lost a warrior king and received in his place a babe of nine months, the youngest monarch the country has ever had. It was not a promising prospect.