xxxxxAs we have seen, in 1401 (H4) many anti-papist Lollards were burned as heretics, and their movement was forced underground. In 1414, however, a comeback occurred, led by Sir John Oldcastle. A loyal and trusted friend of the king, his rebellion proved an acute embarrassment for Henry, and even more so when he was taken prisoner. The king made a number of efforts to persuade him to renounce his views, but all failed, and he was eventually hanged in 1417. For a second time the movement went underground, but re-surfaced in the reign of Henry VIII to merge with the new Protestant forces.

xxxxxWe have seen how the anti-papist Lollards, followers of John Wycliffe, were persecuted during the last reign, that of Henry IV. Because Lollardy had been gaining so much ground, Thomas Arundel, the Archbishop of Canterbury, had been quick to use the statute of 1401 (H4) which gave sanction for the burning of heretics. William Sawtrey was the first to go to the stake, executed at Smithfield, and he was followed by others. Understandably, the movement went to ground, but it remained a force in abeyance. 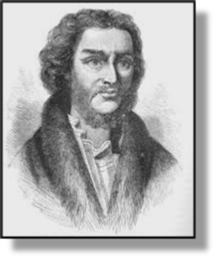 xxxxxEarly in this reign, however, in 1414, the Lollards staged a comeback, led by Sir John Oldcastle. It did not last long, but Oldcastle’s Rebellion, as it came to be called, proved an acute embarrassment for the king. Sir John had been a distinguished soldier. He had fought for Henry IV in the Scottish and Welsh campaigns and, during the fighting in Wales, he had become a friend and confident of the Prince of Wales, the present king.

xxxxxBecause of his open support for the Lollards, Oldcastle was condemned by Archbishop Arundel, still as anxious as ever to stifle if not destroy this bunch of dangerous church reformers. The king tried to persuade Sir John to renounce his views, but when this failed he was brought to trial and condemned as a heretic. Again the king intervened. He had him 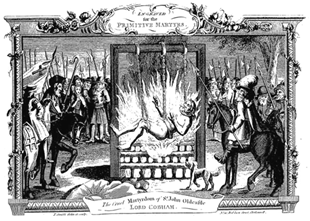 imprisoned in the Tower of London, where he was given a stay of execution for forty days. But Oldcastle’s fate was sealed a few weeks later when he escaped from the Tower, called for a rally of Lollards just outside London, and conspired to kidnap the king. Those who turned up for the meeting were captured or dispersed. Reprisals were severe. Oldcastle himself managed to escape, but was eventually caught in November 1417, and the following month was hanged over a fire that consumed the gallows.

xxxxxFollowing the failure of Oldcastle’s Rebellion, the Lollard movement went underground for a second time, and this time it stayed there. However, it still remained a force for change, especially in London and East Anglia, and in about 1500 a marked revival began despite continued persecution. The movement eventually merged with the new Protestant forces and, as it was already in being, it played an important part in conditioning public opinion to accept church reforms put forward by

xxxxxIncidentally, Shakespeare had a character named Sir John Oldcastle in the first version of his play Henry IV, but, as a fat, dishonest and cowardly knight, he bore no resemblance to the real Sir John. He later changed the name to Falstaff, probably because of protests from aggrieved descendants.