xxxxxAs we have seen the Ming dynasty was established in 1368 (E3). Yung-lo was the third and greatest Emperor of this “brilliant” dynasty. Coming to power in 1403, he quickly reduced the authority of the imperial princes, aided by an efficient secret police. He then sent out missions deep into Asia, and naval commanders as far as South East Asia, India and Africa in order to establish his authority. At one time even the Japanese leader Yoshimitsu recognised his lordship. At home he moved his capital from Nanking to Peking in 1421, where he was responsible for the building of the Forbidden City. This move meant renovating the Grand Canal system so that grain could be sent to the new capital by waterways. But his empire was not without its enemies, and he was obliged to spend many years defending the Great Wall - such as the expedition of 1414 - and in quelling rebellion in the southern province of Annam. In the peace he thereby secured, scholarship and art flourished. This is the age of the great encyclopedia, the Yung Lo La Tien, completed, as we have seen around 1407 (H4), and the distinctive blue-on-white porcelain of the Ming dynasty. The empire continued to flourish after his death despite, as we shall see, a serious defeat at the hands of the Mongols in 1449 (H6). 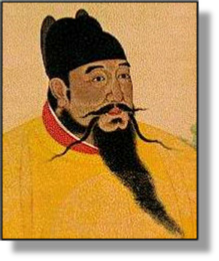 xxxxxAs we have seen, the Ming dynasty was established in 1368 (E3). Yung-lo was the third emperor of this “brilliant” dynasty in China. A vigorous, domineering man with proven ability as a soldier, he came to power in 1403 after a bloody civil war. After capturing the walled-city of Nanking in that year, he seized the throne from his nephew, Chu Yun-wen, and then carried out an extensive purge of his relatives and advisors. Chu Yun-wen himself escaped but was never seen again. At the same time he stripped the imperial princes of their powers, making them of little threat to the central government, and established a secret police known as the Eastern Depot, charged with the task of ferreting out anti-state activities.

xxxxxThe new emperor was determined from the start to reassert Chinese supremacy in all fields of endeavour. In so doing he brought the Ming dynasty to the height of its power. As a first step, he sent naval commanders as far afield as south-east Asia, India and Africa in order to have his authority acknowledged by way of tribute. On one occasion he received ambassadors from trading posts along the east African coast. And for a time, too, even the Japanese leader, Yoshimitsu, accepted his lordship, making him the only emperor in Chinese history to be so honoured. In addition, he sent missions overland to Tibet, Nepal and Central Asia to seek the homage he felt he and his empire deserved. 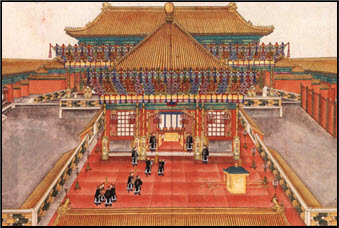 xxxxxAt home, as we shall see, it was Yung-lo who moved the capital city from Nanking (Nan-ching meaning southern capital) to Peking (Pei-ching meaning northern capital) in 1421. The reconstruction of Peking, including the building of the Forbidden City (illustrated), was begun in 1417 and the city was formally made the capital in 1421. This move deprived the capital city of its central location, but it was considered that from this new position the government could keep a better watch over the country's northern borders, the area most vulnerable to attack. The move also posed problems of grain supply for the capital. Coastal transport was first used to convey grain from the Yangtze Valley, but by 1415 the Grand Canal system had been renovated and grain could be carried to Peking by waterways.

xxxxxDuring the climate of peace, orderly government and economic expansion that his rule created, scholarship, art and literature flourished. We have already learnt of the Yung Lo Ta Tien, that massive encyclopedia, composed over five years under his direction, and completed in about 1407 (H4). This gigantic work not only covered 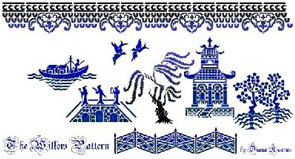 a vast range of subjects, but also preserved volumes of Chinese literature, much of which would have been lost without this careful documentation. And this was the age when Chinese architecture flourished and when the distinctive blue-on-white Ming porcelain was first produced, the floral decoration gradually giving way to the famous willow pattern, much in demand in Europe.

xxxxxBut Yung-lo was not a cultured man himself. He was a soldier, having spent much of his youth patrolling the northern border against possible incursions by the various Mongol peoples settled beyond the Great Wall. In the first part of his reign this frontier gave little cause for concern, the Mongols being divided amongst themselves. At this time only Tamerlane, the Turco Mongol empire builder, posed a threat, and this came to an end with his death in 1405. However, with the arrival on the scene of a new Tatar leader, Aruqtai, incursions began, and over a period of fifteen years (1410 to 1424) Yung Lo led five expeditions into the Gobi desert - with a major advance in 1414 - to keep various Mongol tribes at bay. Furthermore, troubles broke out in the south. Annam, made a Chinese province in 1407, began a campaign of guerrilla warfare, and by 1418 had secured its independence.

xxxxxBut despite these border troubles, the reign of Yung-Lo can be regarded as the most successful in the Ming dynasty, and Yung-Lo himself as the greatest of the Ming emperors. In 1424 when he was taken ill and died while returning from one of his campaigns in Mongolia, he left behind a well-administered, and prosperous empire, and it remained so for some years despite, as we shall see, a serious defeat at the hands of the Mongols in 1449 (H6).

xxxxxOne of Yung-lo's most successful naval commanders was Cheng Ho (1371-1435). He made seven long journeys as far as the coast of East Africa, impressing those he visited by the size of his fleet - some sixty ships or more - and receiving homage and tribute as a consequence. 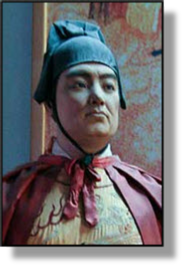 xxxxxThe best known and most successful of the naval commanders who undertook maritime expeditions on behalf of Yung-Lo, was the remarkable Cheng Ho (1371-1435). A Muslim navigator, he went on seven long journeys between 1405 to 1433, voyaging to South East Asia, Ceylon, the Persian Gulf, India and the coast of East Africa.

xxxxxDesigned primarily as “showing the flag” missions to impress the neighbours (and the not-so-near neighbours!), these displays of naval power were not without effect. On one such voyage, for example, completed in 1415, Cheng Ho returned with some 30 envoys from various states in south and south-east Asia, each prepared to pay homage to the Emperor. Perhaps this was not too surprising when one learns that on his first trip alone this maritime explorer had over sixty vessels and thousands of men under his command. A fleet of that size must have been an impressive sight. These expeditions made China into a great sea power, and said much for Chinese expertise in shipbuilding and navigation.

xxxxxIncidentally, on his trip to the east coast of Africa, Cheng Ho returned to China with a live giraffe.