xxxxxThe German monk Thomas à Kempis spent most of his life at the monastery of Mount Saint Agnes at Zwolle in the Netherlands. It was here that he wrote The Imitation of Christ, a brilliant devotional treatise which incorporated the beliefs of the movement known as Devotio Moderna. These stressed the importance of the spiritual life over the materialistic, and the need to follow a life of humility and poverty. It was in circulation from around 1418 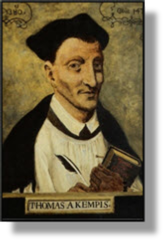 xxxxxThomas à Kempis was born Thomas Hemerken and took his name from his birthplace, Kempen in the Rhineland. He was educated in the Netherlands at Deventer, a centre devoted to education and the care of the poor, and then joined the Windesheim congregation at the Augustinian monastery of Mount Saint Agnes at Zwolle. It was here, as a monk, that he spent most of his long life, mainly occupied in copying manuscripts and writing works of devotion. 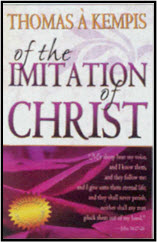 xThe treatise De Imitatio Christi (The Imitation of Christ) is generally attributed to him and, if it is by his hand, then it is certainly his best work. Indeed, it is considered by many to be the most outstanding devotional treatise ever produced, and one of the most influential writings in Christian literature. Written in simple language and style, it incorporates the beliefs associated with the movement known as Devotio Moderna. It stresses, above all, the importance of the spiritual over the materialistic, and the need to be Christ-centred, following His moral example in humility and poverty. The work was in circulation from about 1418.

xxxxxThe movement Devotio Moderna (Modern Devotion) was a movement of spiritual reform created by the Dutch priest Gerhard Groote (1340-1384) with the aim of making religion more easily understood in the changing, “modern” attitudes of his day. In 1371 he set up a school for poor scholars at Deventer, and out of this grew the Brethren of the Common Life, lay centres dedicated to education (the Humanities and Latin) and the care of the poor. These centres spread rapidly throughout northern Europe, and played a significant part in improving educational standards. The Dutch scholar and humanist Desiderius Erasmus was one who benefited from this teaching order. After Groote’s death this spiritual movement, based on pious devotion, was further enhanced by the establishment of the Congregation of Windesheim at the monastery of Mount St. Agnes at Zolle. Thus Thomas à Kempis attended both the lay and spiritual communities of this movement.

Thomas À Kempis: 1460, artist unknown. Gerhard Groote: by the Italian painter Simone Martini (c1284-1344), 1324 – originally part of an altarpiece in the church of Sant’Agostino, Siena, but now in the National Museum, Siena.