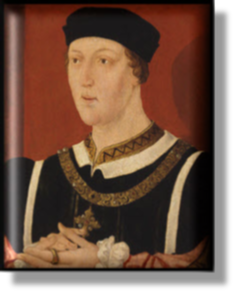 xxxxxHenry VI was but nine months old when his father died in August 1422, the youngest king England has ever had. Although the infant Henry was King of France by the Treaty of Troyes, the Duke of Orleans also assumed this title on the death of his father in October, so the Hundred Years’ War, that long series of battles and sieges between England and France, continued unabated.

xxxxxHenry’s guardian, his uncle John, Duke of Bedford, won ground against the French, but English fortunes changed in 1429, when the young girl Joan of Arc raised the siege of Orleans, and the Dauphin was crowned Charles VII at Reims. Although the young Maid of Orleans was captured and executed in 1431, and Henry was crowned King of France in Paris that year, English power was clearly on the decline. England had no military leader of real ability, whilst at 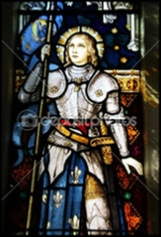 home the minority council was rendered virtually useless by constant disputes between its members. In 1435 matters grew worse. The Duke of Bedford was killed in battle, and the Burgundians, up until then staunch allies of the English, changed their allegiance, and put all their support behind the French king, Charles VII.

xxxxxIt was against this background that in 1437 Henry VI assumed personal command of his kingdom at the age of 16. The need of the times was for a firm, determined monarch, but Henry quickly showed that he lacked all the necessary leadership qualities. Pious and studious by nature, and under the influence of the powerful Beaufort family, and then the Duke of Suffolk, his rule was nothing short of a disaster. Added to this, his marriage to the domineering Margaret of Anjou in 1445, plus the constant rivalry between his chief ministers, virtually brought the government of the nation to a standstill. The Cade Rebellion of 1450, affecting much of south-east England, was a revolt not only against the social conditions of the time, but also against the lack of firm leadership at the top. The last straw came in 1453 when, with the loss of Bordeaux, the English were thrown off the continent. Of all the vast possessions once held in France only the port of Calais remained in their hands.

xxxxxIt is hardly surprising, therefore, that in 1455 the Duke of York, who, in fact, had a stronger claim to the throne than the king himself, should make a bid for the crown. He had already acted as protector of the realm in 1453 when the king had begun to go insane, and he now took up arms against the House of Lancaster. The vicious civil war that followed, later called The Wars of the Roses, raged for thirty years with varying fortunes for both sides. The major battles were fought at St. Albans (1455) - won by the Yorkists - and at Wakefield (1460), where Henry’s wife, Margaret of Anjou, defeated and killed Richard, Duke of York. But all was not over. Richard’s son Edward then defeated Margaret at the Battle of Towton in March 1461, and in June was crowned as Edward IV at Westminster Abbey. Henry, plus wife and son, fled to Scotland. Henry was captured in 1465 and imprisoned in the Tower of London. From here, as we shall see, he was destined to make a come-back in 1470 (E4), brief though it proved to be. 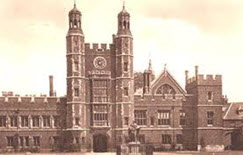 xxxxxIncidentally, it was Henry VI who, in 1440, founded Eton College, near Windsor, one of England’s most famous public schools, and, a year later, established the equally famous King’s College at Cambridge.