xxxxxThe Wars of the Roses was a series of armed clashes between the rival houses of Lancaster, led by the king and his wife Margaret of Anjou, and of York, led by Richard, Duke of York, and his son Edward. Brought about by the social, economic and political unrest throughout the country, it lasted some 30 years. At first, the struggle went in favour of the Yorkists. They won the Battle of St. Albans in 1455 - after which Richard was made protector of the realm - and the Battle of Northampton in 1460. However, the redoubtable Margaret of Anjou took up arms and won the Battle of Wakefield later that year, killing Richard in the process. Now his son Edward took the lead, defeated the Lancastrians at the Battle of Towton in 1461 and was crowned Edward IV. Henry, plus wife and son, fled to Scotland, but Henry was captured in 1465 and imprisoned in the Tower. As we shall see, however, from here he made a dramatic comeback in 1470 (E4) and, for a short time, the struggle was resumed 1471 (E4).

aaaaaThe Wars of the Roses 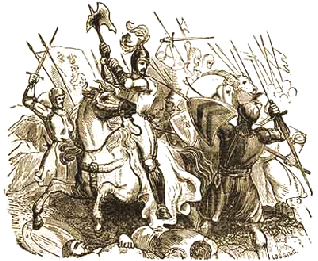 was a series of armed clashes between the rival houses of Lancaster, led by the king and his wife Margaret of Anjou, and the Yorkists, led initially by Richard, Duke of York. It lasted, off and on, for some thirty years and culminated in the defeat of the Yorkists at the Battle of Bosworth Field in 1485 (R3). This Lancastrian victory marked the beginning of the Tudor period under Henry VII.

aaaaaThe first phase of this messy conflict began in 1455 and ended six years later when Henry was defeated and forced off his thrown by Edward, the son of Richard of York. That a revolt against the crown should have broken out in 1455 is hardly surprising. The country was in a very poor state. Henry was constantly suffering from bouts of insanity and could give no firm lead; the war in France had been lost; and there was a great deal of social and political unrest throughout the country, exemplified in the south-east by the serious Cade Rebellion of 1450. 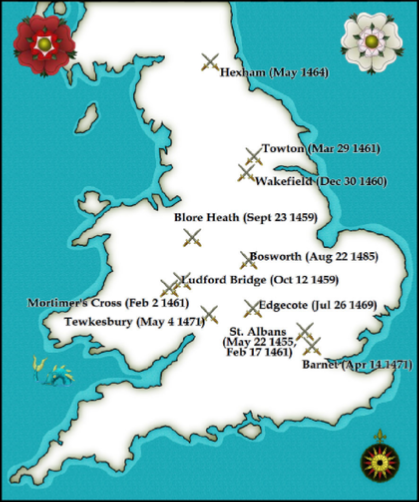 aaaaaLike the king himself, Richard, Duke of York, could lay claim to the throne through Edward III. - he was the son of Edward III's third son! In 1453, because of the king's insanity, he was appointed protector of the realm, but two years later the king, having recovered, sought to destroy him. Yorkxtook up arms and, defeating the king's forces at the Battle of St. Albans, was again appointed protector. This was not acceptable, however, to the redoubtable Margaret, the king's wife, and her followers, including the powerful Beaufort family, and the war was resumed. Inx1459 York invaded England, together with his ally the Earl of Warwick, and in June 1460 he again defeated the royalists, this time at the Battle of Northampton. After this victory, Parliament appointed him successor to Henry, but, once again, this did not please the Queen. Thisxwas hardly surprising because it disinherited her own son. She mustered an army in the north and, taking the Yorkists by surprise, defeated them at the Battle of Wakefield, the Duke of York himself being killed in the conflict. This was followed early in 1461 by the second battle of St Albans and the defeat of Warwick.

aaaaaAll seemed over, but Edward, the son of the Duke of York, now took up his father’s mantle. He marched to London and in 1461 proclaimed himself king, an appointment clearly confirmed in March of that year when he won the decisive and bloody Battle of Towton against the Lancastrians and was crowned Edward IV. Henry, together with his wife and son, fled to Scotland but, as we shall see, he made a dramatic comeback in 1470 (E4), brief though it proved to be, and the struggle was resumed in 1471 (E4).

term “Wars of the Roses”,

so named because it is alleged that the Lancastrians had the red rose as their emblem and the Yorkists sported a white one, was not used at the time of the conflict. Indeed, it seems that the name did not emerge until the nineteenth century when the English writer Sir Walter Scott used it in one of his novels.