xxxxxIt was the Florentine goldsmith and sculptor Lorenzo Ghiberti who produced the splendid pair of gilded bronze doors for the northern side of the Florence Baptistry. Composed of 28 panels showing scenes from the New Testament, he was assisted by the Italian artists Uccello and Donatello. But it was the second pair of doors, those on the eastern side of the building, started in 1423, which won him fame and fortune. Made up of ten large panels depicting, in relief, scenes from the Old Testament, and not completed until 1452, they were described by the great Italian artist Michelangelo as the “Gates of Paradise”, and the name has rightly stuck. Among other works to be seen in his native city are three huge statues of St. John the Baptist, St. Matthew and St. Stephen in the church of Or San Michele. 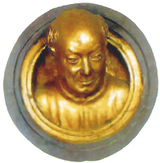 have seen, it was the Florentine goldsmith and sculptor Lorenzo Ghiberti, who, in 1402, won the commission for the work on a pair of gilded bronze doors on the northern side of the Florence Baptistery. Among the students who helped him with this project were Uccello and Donatello. Splendid though these doors were on completion - they comprised 28 panels showing scenes from the New Testament - it was the second pair, those on the eastern side of the building, which brought him lasting fame and fortune. Described by no less an artist than Michelangelo as the “Gates of Paradise” (the name by which they are known to this day), they take their place amongst the masterpieces of the early Italian Renaissance. 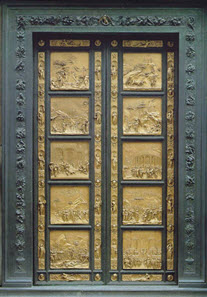 aaaaaBegun in 1423, these doors occupied Ghiberti for the rest of his working life. Also made of gilded bronze, they depict scenes in relief from the Old Testament, contained in ten large panels (three illustrated below). In this work the special features of the Renaissance - a close study of nature and a classical simplicity of form - are much more in evidence. Among other works in his native city are the three larger-than-life bronze statues of St. John the Baptist (illustrated on right), St. Matthew and St. Stephen in the church of Or San Michele, completed between 1414 and 1428. He also made a model of a dome for the city's cathedral, produced for a competition which was held to appoint an architect for this work, but, as we have seen (1420 H5), he lost out to Brunelleschi. His autobiography entitled Commentaries, written around 1450, and contained in three books, has provided some interesting information about the theory and history of art.

xxxxxThe artist Paolo Uccello (1397-1475), also from Florence, assisted Ghiberti during his work on his first pair of baptistery doors. In 1415, however, he turned to painting, and his work became noted for his concern with perspective - the illusion of depth - and the warmth of his colours. A good example of his work, St. George and the Dragon, is in the National Gallery, London. For the Duomo, he produced a remarkable fresco of a soldier on horseback, and in 1414 designed two stained glass windows for the cupola. Another fine work is his portrayal of The Flood, to be seen in the church of Santa Maria Novella.

Gates of Paradise are remarkable, above all, for the artist's brilliant use of perspective, a special feature of Renaissance art. Also experimenting with the science of perspective at this time was another Florentine artist, the painter Paolo Uccello (1397-1475). He trained originally as a goldsmith and, as earlier noted, was apprenticed to Ghiberti during work on the first set of baptistery doors. In 1415, however, he turned to painting. Most of his work was produced in Florence, some for the Medici family, but he also visited Venice, where he might well have designed mosaics for the facade of St. Mark's Cathedral. His painting combines elements of Renaissance art - notably in the illusion of depth created by linear perspective - with the warm colours and elaborate patterns of the Gothic style. 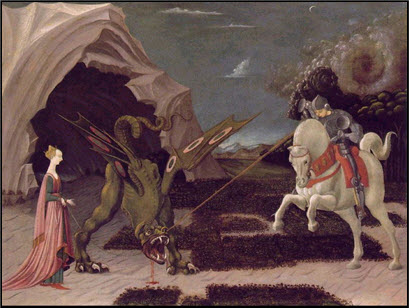 aaaaaWorthy of special note are his St. George and the Dragon (now in the National Gallery, London and illustrated here), and The Hunt (now in the Ashmolean Museum, Oxford), both completed around 1460, together with three panel paintings of the Battle of San Romano, (illustrated below), one of which is in the National Gallery. These three panels, depicting the victory of Florence over the combined forces of Siena and Milan in 1432, were commissioned by a Florentine banker. They were remarkable above all for their size (each measured about 10 x 6ft), and for their illusion of depth. This was obtained by sketching in a “ghost pavement”, the receding lines enabling Uccello to scale down the size of the figures according to their position. The style of this work is also interesting. It is extremely well detailed, packed with action, and its geometric designs and crisp colours anticipate modern art, exemplified by the Spanish painter Pablo Picasso. The paintings, meant to be hung in sequence, eventually fell into the hands of Lorenzo the Magnificent. After his death, however, they were split up - doubtless because of their size - and are now in the city galleries of London, Florence and Paris.

aaaaaFor Florence Cathedral he produced a remarkable fresco depicting a soldier on horseback, and in 1444 designed two stained-glass windows for the cupola. He also produced some imaginative frescoes for the Green Cloister in the church of Santa Maria Novella. Depicting scenes from the creation, they have been badly damaged over the years, but his portrayal of The Flood clearly illustrates his obsession with the science of perspective. Despite his genius, and the amount of work he accomplished, it is said that Uccello ended his days in poverty. This is in marked contrast to Ghiberti, who became a leading member of Florence society and died a rich man. 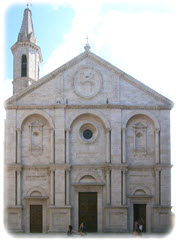 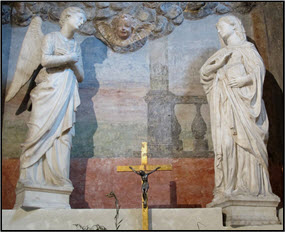 aaaaaYet another Florentine artist who should be mentioned is the sculptor and architect Bernardo Rossellino (1409-1464). He was influenced by the works of both Ghiberti and Luca della Robbia, and is best remembered for his tombs of Orlando de Medici (in the church of Santissima Annunziata) and Leonardo Bruni (in the church of Santa Croce), completed in 1447 and illustrated below. In the latter work, considered to be his masterpiece, he was assisted by his younger brother Antonio. He was later employed as an architect on the building of St. Peter's in Rome, and was responsible for the design of the apse. Other works include the cathedral in Pienza (illustrated left) - where he constructed a number of buildings in the Renaissance style for Pope Pius II - and his

Annunciation in the Church of St. Stephen in Empoli (illustrated on right).

aaaaaIncidentally, the Italian humanist Leonardo Bruni (c1370-1444) served as Chancellor of Florence for seventeen years, and his Twelve Books of Histories of the Florentine People is the first scholarly history of the city. He also served the Renaissance well by his Latin translations of the Greek works of Plato, Aristotle and Plutarch, and his biographies in Italian of Dante, Petrarch and Boccaccio. His tomb in the Church of Santa Croce in Florence (illustrated) was the work of Bernardo Rossellino.

Left to right: The Creation of Adam and Eve, Animals leaving the Ark, and Jacob and Esau.