xxxxxIt was in 1450 that a Kentish landowner named Jack Cade led a revolt against high taxes, official corruption, and the incompetence of some of the king’s ministers. The rebels, mainly small landowners and peasants from Kent and Sussex, defeated a royalist army at Sevenoaks and occupied London. Here they executed the sheriff of Kent and the lord treasurer but, due to continued violence, they were driven out of the city. Most of the rebels dispersed, but Cade was hunted down and mortally wounded near Lewes in Sussex. Though quickly suppressed, the revolt testified to the growing unrest in the country at this time, not only about economic matters, but also over the lack of sound leadership - a factor which was to lead to the Wars of the Roses five years later. 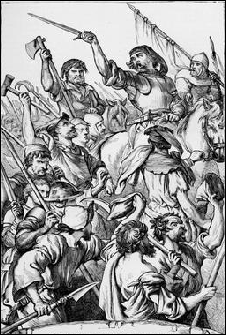 Jack Cade, a Kent landowner and self-styled physician, led a popular revolt against heavy taxation and the corruption of royal officials. Calling himself John Mortimer, which thus identified him with the family of Henry’s rival, Richard, Duke of York, he also demanded the removal of some of the king’s ministers and the recall of Richard, then in Ireland. The rebels, made up of a large number of small landowners and peasants from Kent and Sussex, defeated a royalist army at Sevenoaks and then occupied London the following month. Meanwhile, the king took refuge in Kenilworth Castle in Warwickshire.

aaaaaAt first, they were well received by the townsfolk of London, and the authorities were forced to execute both the sheriff of Kent and the hated James Fiennes, the lord treasurer. But on resorting to further violence, Cade lost support of the people of London and the rebels were driven out of the city. Most of them dispersed after receiving pardons and the promise of reforms. Cade was also pardoned, but he was then hunted down by the Sheriff’s men. He was mortally wounded near Lewes in Sussex and died at Heathfield on his way to London.

aaaaaAccording to some accounts, Cade was actually of Irish birth and, at one time, had fought for France against England in the Hundred Years' War. He lived in Sussex for a while, but in 1449 he was accused of murder and fled to France. On his return the following year he settled in Kent where he posed as a physician named John Aylmer before leading the revolt and assuming the name of John Mortimer. The pardon he received following the collapse of the rebellion was granted in the name of Mortimer, so the authorities doubtless felt justified in hunting down and killing Jack Cade!

aaaaaThe rebellion was quite quickly put down, but it was a major revolt nonetheless, and testified to the serious unrest in the country at this time. Although it was concerned with economic matters - high taxes and high prices - there were also strong political undertones, and it doubtless contributed to that general breakdown of royal authority which was to come to a head five years later with the outbreak of the Wars of the Roses between the houses of York and Lancaster.