xxxxxDonatello, who revived the classical style, is regarded as the founder of modern sculpture in both marble and bronze. His work is seen at its best in his life-size nude figure of the biblical hero David (completed in 1435) and his fine equestrian statue of the Venetian general nicknamed “Gattamelata”. Born in Florence, he was a friend of Brunelleschi and for a time was one of Ghilberti’s students. Other major works include the statues of the five prophets, made to adorn the Florence bell-tower; two relief works, Saint George Killing the Dragon and the Feast of Herod; his Cantoria (Singer’s pulpit) originally made for Florence cathedral; and his decoration of the high altar in the Paduan church of San Antonio.

aaaaaHaving studied in Rome for some years, the Italian sculptor Donatello is remembered above all for his revival of the classical style. He can be rightly regarded as the founder of modern sculpture in both marble and bronze. His work is seen at its best in his graceful bronze statue of the biblical hero

David, completed in 1435 - the first life-size free-standing nude figure since antiquity - and in his brilliant equestrian statue of a Venetian general, nicknamed Gattamelata, produced for the city of Padua, and noted for the accuracy of its proportions and the vitality of both horse and rider (illustrated below).

aaaaaHe was born in Florence and, as we have seen, he worked for a time as a student under Ghiberti, assisting in the making of his first set of bronze doors. One of his first individual works, a marble statue of David, clearly shows the influence of his former master. And, early on, he was also on good terms with Brunelleschi with whom he visited Rome in the early 1400s. His early sculpture owes much to his friend’s use of linear perspective, and story has it that the wooden crucifix in the church of Santa Croce was made as part of some good-humoured rivalry between them.

aaaaaHis early work in Florence, notably his marble statues of St. Mark and St. George and his seated figure of St. John the Evangelist, retain the influence of the Gothic style, but show a realism and a naturalism which were to become the hallmarks of his later work. His David and Gattamelata aside, his statues of the five prophets, made for the niches in the bell-tower and since removed to a local museum, are outstanding for the boldness of their individual features, and two of them number among his masterpieces. In his relief work, mention must be made of his Saint George Killing the Dragon at Or San Michele. Here, as in later work of this kind (such as the Feast of Herod 1435), his carving is unusually shallow, a technique which, perhaps surprisingly, creates a feeling of width and space.

aaaaaAmong other major works are his delightful Cantoria (the Singer’s pulpit), made for Florence cathedral and now in its museum (illustrated centre below), and the elaborately decorated high altar, together with its beautiful bronze crucifix, made for the Paduan church of San Antonio. The altar’s framework is made of marble and limestone and adorned with seven life-size statues and twenty-one reliefs, all in bronze. The statues of the Madonna, regal in pose, and of St. Francis, most delicate in execution, are particularly outstanding, as are the reliefs depicting the four miracles of St. Anthony. Shown here are Madonna and Child (left), and a detail of Mary Magdelene (right).

xxxxxAn artist strongly influenced by Donatello and Brunelleschi was Masaccio (1401-27). He adopted a classical simplicity and attempted to create a feeling of depth by line and light - notable in his panel The Madonna with St. Anne. Among his masterpieces are two frescoes The Tribute Money and Expulsion from Eden in the Florentine church of Santa Maria del Carmine - remarkable for his skilful use of light and shade and the emotional content - and his Trinity fresco in the church of Santa Maria Novello, in which linear perspective brilliantly captures the illusion of depth. His Madonna and Child Enthroned can be seen in the National Gallery, London. His work influenced other artists, including Michelangelo.

aaaaaA contemporary artist who was strongly influenced by Donatello (and Brunelleschi) was the Italian painter Masaccio (1401-1427). It was due to his study of Donatello’s work that he moved away from the Gothic style, adopting a classical simplicity in which to highlight the drama of the piece, and attempting to create the illusion of the three-dimensional by perspective and the source of light. Such innovation is particularly noticeable in his panel The Madonna with St. Anne, now in the Uffizi Gallery in Florence (illustrated right below). Butxit is perhaps in the frescoes he painted for the Brancacci Chapel in the Santa Maria del Carmine in Florence, in collaboration with the Tuscan artist Masolino da Panicale (c1383-c1447), that we see Masaccio at his best. Two of his frescoes, in particular, The Tribute Money and Expulsion from Eden of 1427 (details illustrated here), demonstrate not only his skilful use of light and shadow (known as Chiaroscuro) but also the emotion and drama of the event itself. Notice the grief-stricken figures of Adam and Eve as they leave their paradise.

xxxxxThe early work of the Florentine painter Fra Filippo Lippi (1406-69) was strongly influenced by Masaccio and Fra Angelico, as can be seen in his fresco Reform of the Carmelite Rule and his Annunciation. Here his figures are rounded, and he uses perspective to good effect. In the 1440s he served the Medici family, a major altarpiece of this period being his Coronation of the Virgin, painted, unusually, in a single panel. Another outstanding altarpiece was his Madonna and Child with Scenes from the Life of Mary, a circular painting in the Pitta Palace, Florence, which captures, above all, the feeling of grace and serenity which is a feature of his work. When he died the Medici had a splendid sepulchre built in his honour. His work is said to have had a marked influence upon the great Italian artist Sandro Botticelli.

aaaaaThe Florentine painter Fra Filippo Lippi (1406-1469) deserves a mention here. His early work was strongly influenced by Masaccio (and Fra Angelico), especially in his fresco Reform of the Carmelite Rule in the Forte di Belvedore, and his Annunciation in the San Lorenzo. His figures are rounded, and he uses the principles of perspective to good effect. In the 1440s, however, he turned to the more decorative Gothic style, with its somewhat heavy adornment and warmer colours. 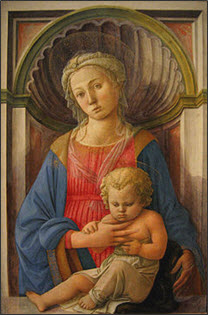 aaaaaBorn about 1406 and orphaned at an early age, Lippi was raised in the Carmelite monastery and became a monk at the age of 15. It was at this time that Masaccio was painting frescoes in the Brancacci chapel there, and this work made a deep impression upon him. The restricted, religious life did not suit his temperament, however, and he left in 1432 and led an adventurous five years before returning to Florence in 1437. Here, like many artists of the day, he served the Medici family, working in a number of the city’s churches and convents. A major work at this time was his altarpiece Coronation of the Virgin, now in the Uffizi gallery in Florence. This was crowded with figures and showed above all a sound mastery of the perspective format. It also broke new ground in that the scene was not divided up into a number of panels, but was painted as one continuous whole. Shown here is Madonna and Child, completed in 1445.

aaaaaBut perhaps his most outstanding altarpiece was his Madonna and Child with Scenes from the Life of Mary, a circular painting in the Pitta Palace, Florence, illustrating both his realism and the clarity of expression. In many of his works, as in the one illustrated above, he captures a grace and serenity not matched by many of his contemporaries. Among other works are his series of frescoes for the Cathedrals of Spoleto and Prato. It was while he was working at the Convent of Santa Margherita at Prato in 1456 that the wayward monk ran off with one of the nuns there, Lucrezia Buti. They were later married and their son, Filippino, also became a noted Florentine painter.

aaaaaIllustrated here (left to right) are Madonna of Humility, The Adoration of the Magi,

and The Vision of St. Augustine.

aaaaaHis last three years in Padua, 1453 to 1455, were not happy ones. He was ill for some time, and the two works he completed during this period clearly suggest the stress he was under. His wooden statue of St. John the Baptist, for the church of Santa Maria Gloriosa dei Frari in Venice, and his Mary Magdalene for the Florence baptistery, both thin and distorted, might well be the result of his distressed state of mind. His last years were happier, however, spent in his native city and once again in the service of the Medici family. By the time of his death in 1466, much of Italy had been strongly influenced by his work 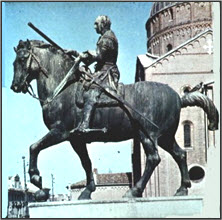 aaaaaIncidentally, Donatello’s famous equestrian statute of the Venetian mercenary leader Erasmo da Narni, nicknamed “Gattamelata” (Honeyed cat!), caused quite a stir when it was completed in about 1450. Dressed as he was in armour and holding up his baton of authority in his right hand, he was considered to be acting above his station. Up until that time such a statute and such a pose would have been reserved for rulers, not jumped-up generals! This might well account for the fact that the statue was not placed on its pedestal until 1453. Ironically, when it was put on public view it became the model for all future equestrian monuments. And we are told that even before that date, the king of Naples had asked Donatello for a statue of himself in similar pose! Today the once-controversial statue (here illustrated) stands in the Piazza del Santo in Padua. 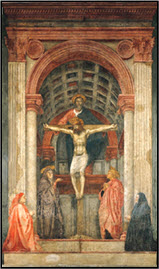 aaaaaThese frescoes rank among his masterpieces, as does his Trinity fresco in Santa Maria Novello in Florence (illustrated here). In this work the linear perspective employed gives the illusion of the chapel receding far into the distance. His Madonna and Child Enthroned, painted for a church in Pisa, is in the National Gallery, London. Here again, we can see how the artist uses linear perspective and a single source of light to create the illusion of depth, and to direct the eye to the focal point. Such works played a major part in the art of painting during the Renaissance. The Italian art historian Giorgio Vasari observed that all the Florentine artists of the day studied his works “to learn the precepts and the rules for painting well”. Michelangelo for one is known to have copied some of the figures from his frescoes.

aaaaaIncidentally, Masaccio’s real name was Tommaso di Ser Giovanni di Mone, but he was given the nickname “Slovenly Tom” because he was so dedicated to his art that he cared little about his appearance or personal affairs. If nothing else, it certainly shortened his name.

aaaaaSo highly valued was Lippi’s work that, when he died in 1469, the Medici had a splendid sepulchre erected in his honour. Designed by his son, Filippino, it can be seen in Spoleto cathedral. It proved a fitting tribute to a man whose painting was destined to have a marked influence upon the great Italian artist Sandro Botticelli.