xxxxxAs we have seen, the Treaty of Troyes in 1420 (H5), following the English victory at Agincourt, recognised Henry V as Regent of France. The Dauphin, however, would not accept this agreement and in 1429, when the French army, led by the charismatic Joan of Arc, won the Battle of Patay and raised the siege of Orleans, he was crowned king. This proved a turning point. National pride was restored, and when Burgundy made peace with France in 1435, the tide turned against England and its king Henry VI. One by one the English lost their territories in the south-west and across northern France until, by 1453, only Calais remained in their possession. The Hundred Years’ War was over at last. England could now concentrate more upon her maritime strength, whilst France, having defeated the English, could start to build itself as a formidable continental power.

aaaaaAs we have seen, the Treaty of Troyes in 1420 (H5), following on from the Henry V’s decisive victory at Agincourt and the capture of Rouen, recognised the English king as the Regent of France and successor to the deranged Charles VI. But the struggle proved far from over. The Dauphin, declared illegitimate by his father and thus denied the crown, still saw himself as the rightful heir to the French throne. He took no part in the treaty, and Henry was obliged to continue the fight, driving the Dauphin’s forces southwards across the Loire. 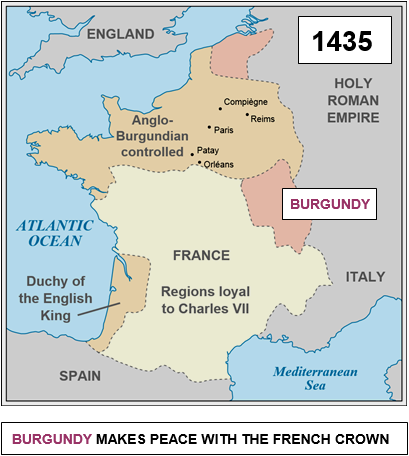 aaaaaIn 1422, the death of both Henry V of England and of Charles VI of France threw the conflict wide open. The English continued to make progress in France, and the regency under John of Lancaster claimed the French crown on behalf of the infant Henry VI. But in the same year, the Dauphin claimed to be the king of France as Charles VII. At this stage, both contestants for the throne of France could claim an area of support. North of the River Loire tended to recognise Henry, but South of the river tended to accept the Dauphin. In order to extend their control further, south, the English laid siege to Orleans, the last French stronghold and key to any southern advance.

aaaaaThe English were confident of success, but in 1429 a French army, led by the charismatic Joan of Arc, raised the siege of Orleans and put the English to flight at the Battle of Patay. It proved a turning point in this long running conflict. Not only was this victory an enormous psychological boost to the weary French, but it was followed directly by the crowning of Charles VII at Reims. National Pride was restored and made the more so when, by the Treaty of Arras of 1435, the French crown made peace with Burgundy, England’s erstwhile ally. Faced with a more united, determined opposition, the English lost Paris in 1436 and sought a truce.

aaaaaFighting was renewed in March 1449 when the English sacked Fougères in Brittany. By this time, however, the French had markedly improved their fighting capacity and soon made short work of recapturing all the lands held by the English except the port of Calais. Normandy was taken in 1450 and Guyenne the following year. When the English were driven out of Bordeaux in 1453, following their defeat at the Battle of Castillon, the Hundred Years’ War, that long series of battles, skirmishes and sieges, was at last over.

aaaaaThe end of the Hundred Years’ War was to prove a blessing for both countries. There had been much loss of life, and France had suffered a great deal of damage to property and land, but the biggest casualty had been the brake this struggle had put on national development. Now England, at last convinced that continental adventures brought no lasting reward, could put its own house in order and then look westward to the world beyond. France, likewise, could build upon the early showing of a national consciousness and construct a realm which was destined to dominate Europe for centuries to come.

The map below shows the major battles during the long conflict. 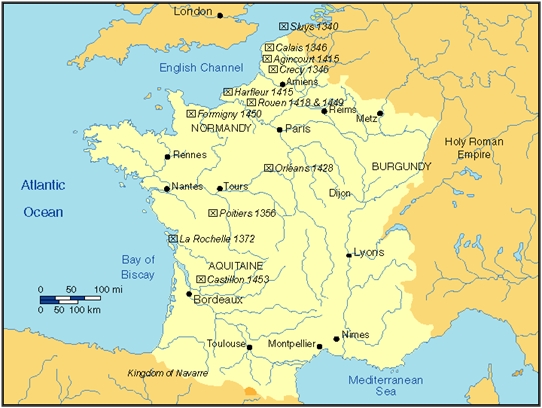