xxxxxThe Khmer Empire came into existence along the Mekong River in the 6th century. The capital was established at Angkor around 880 and, over the years, became a magnificent city of shrines and palaces, culminating in the building of the great temple of Angkor Watt, begun in 1113 (H1). In 1177, however, Angkor was abandoned after attacks from hostile neighbours, and the empire went into decline until, as we have seen, the reign of Jayavarman VII, beginning in 1181 (H2). He built another magnificent capital at Angkor Thom, but in later years this also came under attack. It was finally sacked by Thai armies and abandoned in 1434. The Khmers established a new capital at Phnom Penh further south, and here the empire, much depleted in size, managed to survive over the next two centuries. 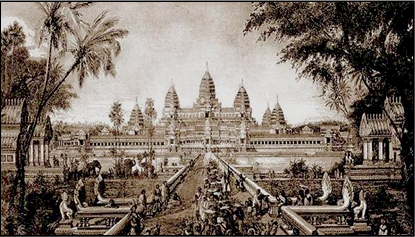 aaaaaThe Khmer Empire came into existence some time in the sixth century, the first settlements being sited along the Mekong River. In about 880 the Khmers established their capital at Angkor - situated north of Tonle Sap in what is now Kampuchea (Cambodia) in South East Asia. Over the years and a succession of rulers, Angkor became a city of magnificent shrines, royal palaces and temples, a showpiece of Hindu architecture culminating in the building of the magnificent Angkor Wat in 1113 (H1). The Khmer rulers were regarded as Hindu gods - hence their massive temple tombs - and Angkor was their royal city. Around it they developed extensive irrigation works, used to supply a growing population with an abundant supply of rice. But the Khmer were not without enemies. The Chams from southern and central Vietnam sacked Angkor in 1177, and the temple was virtually abandoned. 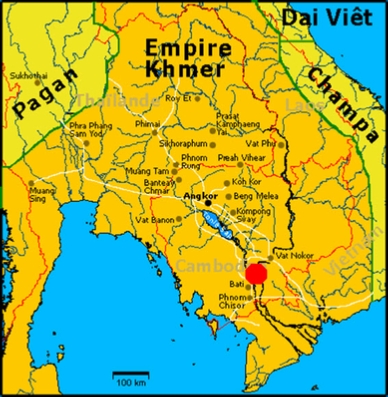 aaaaaAs we have seen, a revival in Khmer’s fortunes came in 1181 (H2) with the coming to power of the competent leader Jayavarman VII. He brought the empire to the zenith of its power and, as part of a huge building programme, rebuilt the capital of Angkor Thom in the same magnificent style. But such greatness was not to last. In the thirteenth and fourteenth centuries constant incursions by the Thais undermined the Empire’s dominance. We know from records that Angkor Thom was attacked and pillaged at least twice in this period (1369 and 1389). And there were also troubles from within. There was social unrest because of heavy demands on the populace, and a breakdown in parts of the vital irrigation system, quite apart from epidemics of malaria and the plague. The empire, which at the height of its power occupied Cambodia and parts of present-day Thailand, Laos and Vietnam, began to crumble at the edges. 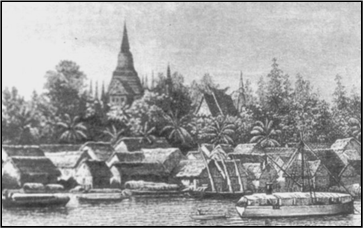 aaaaaThe final blow came in 1431 with yet another Thai advance upon the capital. So severe was this attack that in 1434 Angkor Thom was abandoned and the Khmer moved their court to Phnom Penh further south (illustrated). The empire managed to survive this move, but its territory was much reduced, and a string of weak rulers made matters worse. Over the next two centuries the Khmer were obliged to seek protection from one or other of their stronger neighbours, Siam and Vietnam, in order to retain some semblance of independence. That the empire survived at all - and now occupies Kampuchea (once called Cambodia and the Khmer Republic) - was due more to the divisions which occurred in their would-be enemies than to any inner strength on the part of the Khmer.