The Great Wall of China

xxxxxThe Ming Dynasty was founded in 1368. As we have seen (1414 H5), one of its greatest emperors was Yung Lo. He strengthened the central government and kept the empire’s borders intact. Disaster came, however, with the reign of Cheng-t’ung, starting in 1435. He relied upon an incompetent favourite called Wang Chen, and he led him into a disastrous war with the powerful western Mongols known as the Oirats. In 1449, the imperial army was ambushed, fifty miles north-west of Peking and almost totally annihilated. The emperor was captured and later released, but the Ming dynasty was seriously weakened. Japanese raiders began to attack the south-east coast, and, as we shall see (1550 E6), the Oirats remained a constant threat. However, it was not until the 17th century that the Manchus were to bring an end to the Ming dynasty.

aaaaaThe Ming Dynasty (the “Brilliant” dynasty) was founded in 1368 by Chu Yuan-Chang. By 1382 he had all of China under his control. As we have seen (1414 H5), of the Emperors who followed, Yung Lo was one of the most successful. Ruling from 1403 to 1424, he carried out a number of important reforms at home, strengthening the authority of the central government and cutting back the powers of the imperial princes. Abroad, he was anxious to reassert Chinese supremacy. He sent out naval commanders as far as India and Africa to impress the neighbours. And it was Yung Lo who moved his capital from Nanking to Peking in order that he could keep a closer eye upon the empire’s northern borders and the Mongol tribes beyond. Indeed, so concerned was he over the Mongol threat that he made five expeditions into the Gobi Desert to ensure these potential enemies did not become too powerful. 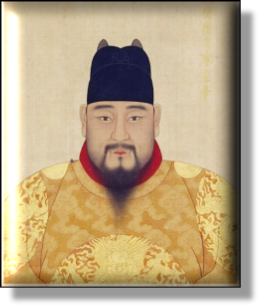 aaaaAt his death this border was comparatively quiet, but the situation changed rapidly during the reign of the sixth Ming Emperor Cheng-t’ung (illustrated). He came to power in 1435 with the title of Zhangtong, but for the first years of his reign the government was in the hands of his mother. By the time he came of age, the Mongols had become a force to be reckoned with, united under their new leader Esen Taiji, the chief of the Western Mongols, known as the Oirats. ThexChinese needed a leader of the calibre of Yung Lo to meet such a threat. Instead, the Emperor relied almost entirely upon Wang Chen, a eunuch who had been his servant and companion from boyhood. An ambitious man, he persuaded the Emperor to launch an attack upon the Mongols in what amounted to a pre-emptive strike. It was a recipe for disaster. 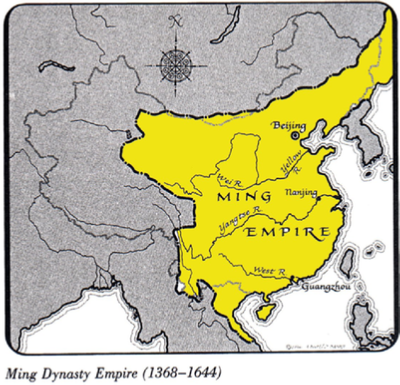 with the young Emperor at its head, but it was badly organised and, under Wang Chen’s pathetic leadership, lacked any plan of action. In 1449 it moved into enemy territory and was promptly ambushed by the Oirats some fifty miles north-west of Peking. Inxthe fighting that followed – the Battle of Timu - thousands were slaughtered, Wang Chen was himself slain, together with all the military leaders, and Emperor Cheng-t’ung, his bodyguards killed around him, was captured. The Mongols then moved on to the capital and besieged the city, but were eventually forced to retire.

aaaaaThe Emperor was released after a year and eventually served a second term of office (1457-1464), but the whole episode was a disastrous blow to the prestige of the Chinese, and seriously weakened the Ming Dynasty. As we shall see (1550 E6), for some years the Oirats were to remain a constant threat in the north, whilst sea raiders from Japan were to cause havoc along the south-east coast. However, it was not, in fact, until the seventeenth century that the Manchus, coming out of eastern Manchuria, were to bring an end to the Ming Dynasty (1644 C1). 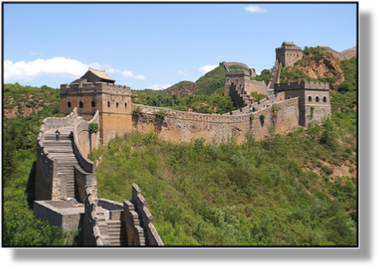 aaaaaIncidentally, one of the consequences of the Battle of Timu was an increased effort in the building of a defensive wall north of Peking, begun by the Ming Empire in the 14th century. A series of fortifications had been built in this northern area many years earlier, notably by Quin Shi Huang, the first Emperor of China (247-220 BC) but, constructed of stones, wood and compressed earth, they were not a permanent barrier. The Ming Wall, however – “the Great Wall of China” – built of hand-made bricks, and fortified by thousands of watch towers – eventually stretched for over 5,000 miles. However, it did not save the Ming Empire. The wall was penetrated by the Oirats on a number of occasions, and the Manchus overthrew the empire in the mid-17th century. ......

aaaaa...... Cheng-t’ung was the first of the Ming emperors to decree that his concubines were not to be sacrificed after his death. Up until this time wives and concubines were buried alive with the Emperor’s body.