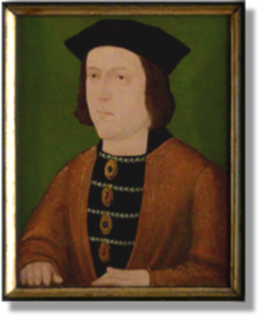 Edward took up the Yorkist cause when his father, Richard, Duke of York, was killed at the Battle of Wakefield in 1460 (H6). He marched to London and in 1461 proclaimed himself king, an appointment clearly confirmed in March of that year when he won the decisive and bloody Battle of Towton against the Lancastrians and was crowned Edward IV. Henry VI, declared a traitor by Parliament, fled to Scotland with his wife and son, but was captured in 1465 and imprisoned in the Tower of London.

xxxxxEdward IV, known as Earl of March before his accession, and the first monarch of the House of York, proved a popular and able king and, apart from a brief period of seven months, he remained in power until his death in 1483. In the early years of his reign, however, the Wars of the Roses rumbled on. Lancastrian resistance was continued by the redoubtable wife of Henry VI, Margaret of Anjou, and matters became worse in 1470 when he quarrelled with the Earl of Warwick. He had been one of the Edward's strongest supporters and had virtually put him on the throne, but a bitter disagreement developed after the king's secret marriage to a commoner, Elizabeth Woodville.

xxxxxWarwick, turning traitor to the Yorkist cause, freed Henry VI from the Tower and restored him to the throne in 1470, but it was never a popular move. Edward was forced to flee to Holland, but with the support of his brother-in-law, Charles the Bold, Duke of Burgundy, he returned in 1471. In April he routed Warwick's forces at the Battle of Barnet and killed Warwick the Kingmaker, as he aptly came to be known. He then followed this up with a victory over Margaret of Anjou at Tewkesbury, a battle in which Margaret was captured and her son Edward, Prince of Wales, was killed. These victories, plus the capture of Henry VI himself and his subsequent murder in the Tower (probably by Richard, Duke of Gloucester), made safe Edward's throne, and finally provided the nation with a brief respite from the battles and skirmishes of the Wars of the Roses.

xxxxxDuring this period of comparative calm,

the country prospered, assisted by the introduction of the silk industry and a marked increase in trade with France, Burgundy and the Hanseatic League. This increased the wealth of the nation as well as the size of Edward's own coffers. In 1475 he added to his wealth by a brief war with France. This ended with the French king, Louis XI, agreeing to pay Edward a large ransom and an annual pension in return for Margaret's freedom. He was certainly the first English king for many a day who died with his accounts in the black! In addition, he improved law enforcement, particularly along the Welsh Marches (borders), and, as a man interested in books, he was a friend and patron of the printer William Caxton.

xxxxxIt was quite a successful reign, but, as was so often the case, the succession did not run smoothly. On his death at the age of 40 - probably of typhus - he left two young sons, Prince Edward and Richard, Duke of York. He willed that his crown should pass to Edward, and that, until the prince came of age, his brother, Richard, Duke of Gloucester, should act as Protector. As we shall see, in 1483 (E5) Edward did become king as Edward V but not for long.

xxxxxIncidentally, each year a service is held in the Tower of London to mark the anniversary of the murder of Henry VI.