xxxxxAs we have seen (1436 H6), the influential Medici family came to political power in 1434 under Cosimo de Medici. He was a great patron of the arts, but his contribution was excelled by his grandson Lorenzo, known as the Magnificent. He took control of Florence in 1469 and, despite conspiracies against him, remained in power until his death in 1492. A talented poet, he gave generously to the promotion of the arts, encouraging artists such as Botticelli, Domenico Ghirlandaio, Fra Filippo Lippi, Andrea del Verrocchio and his pupil Leonardo da Vinci. In the meantime, Michelangelo was treated as a member of the family. His literary circle included the humanist poet Angelo Politian. In 1490 the Medici family came under bitter attack from the religious reformer Savonarola, and a year after Lorenzo's death, his son Piero was expelled from Florence. As we shall see, in 1494 (H7) Savonarola himself took control of the city. 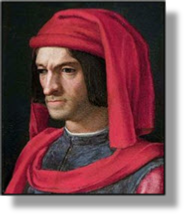 xxxxxThe remarkable Medici family came into prominence in the 1260s, primarily as merchants and moneylenders. As we have seen (1436 H6), they came to political power in 1434 under Cosimo de Medici, a shrewd politician and a great patron of the arts. To him is owed many of the architectural splendours of his native Florence, and he befriended and assisted not only architects, like Brunelleschi and Michelozzo, but also sculptors such as Ghiberti and Donatello, and painters like Fra Filippo Lippi, Paolo Uccello and Fra Angelico.

xxxxxBut talented and generous though Cosimo was, his contribution to the arts was excelled by his grandson, Lorenzo de Medici (illustrated above). Known as Lorenzo the Magnificent, he was an able politician - though lacking his grandfather's cunning - and, following the death of his father, Piero, in 1469, took over the rule of Florence in partnership with his brother. Nine years later his brother, Guiliano, was murdered in a conspiracy led by the Pazzi family and supported by the pope. Lorenzo was wounded but managed to escape, and remained in power until 1492. Following this conspiracy, which was ruthlessly put down, he was involved for two years in an armed struggle with the pope and his ally Naples. Florence was in some danger, but Lorenzo eventually - and courageously - went to Naples and, without involving the pope, reached a peace settlement with the king.

xxxxxHis administration of the city was both efficient and popular, and although, as a banker, he lost much of the family fortune (recouped, some say, from the state purse!), he gave generously to the promotion of the arts, and was himself a talented poet. At his court he gathered around him a brilliant circle of painters, architects, poets and philosophers. Among the leading artists of the day whom he both encouraged and patronised were Botticelli, Domenico Ghirlandaio, Fra Filippo Lippi, Andrea del Verrocchio and his pupil Leonardo da Vinci. Meanwhile the young Michelangelo, treated as a member of the family, was at work in the school of sculpture, housed in the garden of San Marco. Lorenzo was also patron to a large literary circle, including Giovanni Pico della Mirandola, Luigi Pulci and the humanist poet Angelo Politian, as well as to the philosopher Marsilio Ficino, the first linguist to make a complete translation of Plato in any European language. The width of his abilities made Lorenzo the prime example of the ideal “Renaissance Man”. His portrait above is by the Italian artist Agnolo Bronzino

xxxxxLorenzo’s rule ended ominously. The Italian religious reformer Girolama Savonarola, having been invited to preach at San Marco in 1490, launched a bitter attack upon the Medici family and their rule as dictators. A year after Lorenzo’s death, his son, Piero, was expelled from Florence by the king of France, and a republic was proclaimed. As we shall see, it was soon after this, in 1494 (H7), that Savonarola himself returned to take charge of the city.

xxxxxIncidentally, the attempt by the Pazzi family and their friends to kill the two Medici brothers took place during mass on Easter Sunday. Following its failure, it is said that the conspirators were captured and torn limb from limb. The Archbishop of Pisa, supporting the conspiracy on behalf of the pope, was hanged from a window in the Palazzo Vecchio, still wearing his episcopal robes. 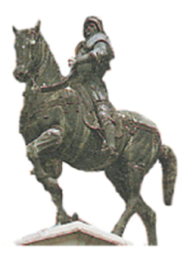 Florentine sculptor and painter Andrea del Verrocchio (1435-88) owed much of his success to commissions obtained from the Medici family, including the design of costumes and armour for such occasions as festivals and receptions. He studied to be a goldsmith, but later gained fame as a sculptor. It is possible that he was a pupil of Donatello for a time. His dramatic bronze equestrian statue of the professional soldier Bartolomeo Colleoni, begun in Venice in 1480, is certainly regarded as one of the masterpieces of Renaissance sculpture (illustrated). He completed the clay model, and it was cast after his death by the Venetian sculptor Alessandro Leopardi. Another work of note is his Doubting Thomas, a life-size group in bronze produced for the Or San Michelle and completed in 1483. The only one painting that can be attributed to him with any certainty is The Baptism of Christ, painted in 1470, and now in the Uffizi Museum, Florence.

xxxxxThis painting is of particular interest because it is generally accepted that the angel on the left of the canvas was painted by his pupil Leonardo da Vinci. And therein lies Verrocchio's second claim to fame. His contribution to the world of art also lies in the rare talent he instructed in his large city workshop, a studio which became renowned for the quality and varied nature of its training. He worked alongside Botticelli, and was the master not only of artists like Perugino and Lorenzo di Credi, but also of the genius of the Italian Renaissance, Leonardo da Vinci. It has been suggested that the young Leonardo was 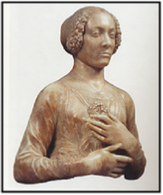 the model for his bronze statue of David, now in the Bargello museum.

xxxxxIncidentally, Verrocchio’s Lady with Primroses (illustrated), also in the Bargello Museum, Florence, was one of the first portrait busts of the Renaissance period to show the hands of the sitter (as Roman busts had done before). Among paintings which have been ascribed to Verrocchio is Tobias and the Angel, now in the National Gallery, London.

xxxxxHere illustrated (left to right) are details from his David, Lorenzo de Medici, and Christ and St. Thomas, and the figure of Putto (Angel) with Dolphin.

xxxxxThe Florence sculptor and painter Andrea del Verrocchio (1435-1488) obtained a great deal of work from the Medici family. As a sculptor - he may have been a pupil of Donatello - he is best remembered for his Renaissance masterpiece, the bronze equestrian statue of Bartolomeo Colleoni. Other sculptures included his life-size Doubting Thomas, completed in 1483, and his delightful bust Lady with Primroses. The only one painting that is certainly by him is his The Baptism of Christ, in which the angel on the left of the canvas is generally accepted as being the work of Leonardo da Vinci, one of his many pupils at the time. He ran a highly successful workshop and studio in Florence, and is known to have worked alongside Botticelli. 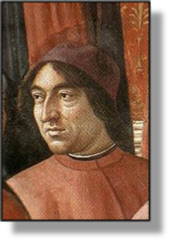 xxxxxA very close friend of Lorenzo de Medici was the poet and humanist Angelo Politian (1454-1494). Fluent in Greek and Latin, he entered the Medici household in 1473, and two years later was entrusted with the education of Lorenzo’s eldest son Piero, then aged three.

xxxxxAmong his major accomplishments was the translation of most of the Iliad into Latin, completed in 1475, and the translation of a large number of Latin and Greek elegies and odes. A somewhat unusual work was his Trees with Mildew, in which he describes in some detail the symptoms of the skin complaint known as scabies. His major work was Stanze per la giostra, (Stanzas for the Joust). This is regarded as one of the great works of Italian literature. Completed in 1478, it includes an account of the love of Giuliano de Medici, referred to as “Julio”, for one called Simonetta. The poem is written in the vernacular but possesses all the refinement of a Latin epic. 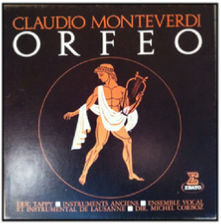 was present when the Pazzi family attempted to kill both Lorenzo and Giuliano, and he wrote a dramatic report on the episode. He later quarrelled with Lorenzo's wife and, being expelled from Florence, he travelled around northern Italy and settled for a time in Mantua. He returned to Florence in 1480 and resumed his work as tutor to Piero, but he was not admitted to the Medici household again. To this later period of his life belongs his Miscellanea, a critical appraisal of ancient authors, and Orfeo, the first major work of Italian drama, and the subject of an opera by the Italian composer Monteverdi in 1607.

xxxxxIn 1475 the poet and humanist Angelo Politian (1454-1494) was appointed tutor to Lorenzo's eldest son Piero. He translated most of the Iliad into Latin, but his major work was his Stanzas for the Joust. One of the great works of Italian literature, it is an epic love poem written in the vernacular. He was expelled from Florence for a while, following a quarrel with Lorenzo's wife, but, on his return in 1480 wrote his Miscellanea, a critique of ancient authors, and Orfeo, the first major work of Italian drama and the subject of an opera by the Italian composer Montiverdi, produced in 1607.