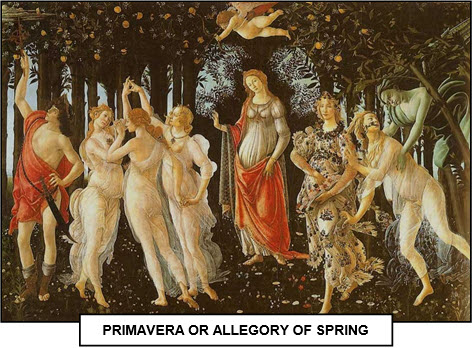 xxxxxBotticelli was one of the outstanding artists of the “golden age” of the Florence Renaissance. Born Alessandro Filipepi, his adopted name, meaning "Little Barrel", probably refers to his elder brother Giovanni, a pawnbroker, who appears to have taken care of him during his early years. He started training as a goldsmith, but it soon became abundantly clear that his talent lay in painting. He served as an apprentice under the Florentine artist Fra Filipo Lippi, and his early work also shows the influence of Andrea del Verrochio, with whom Botticelli might well have worked, together with the young Leonardo da Vinci. 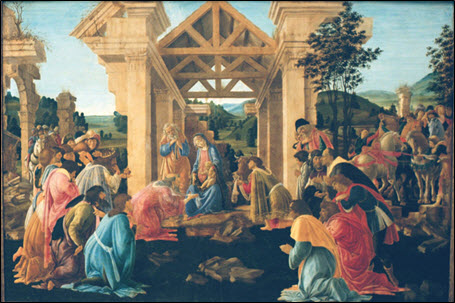 xxxxxBy the age of 25 he was an established painter in the Florence of his day, working for the city's leading families, first amongst whom were the Medicis. He was court painter to Lorenzo the Magnificent, and his Adoration of the Magi, for example, a brilliant work in its own right, was clearly painted as a tribute to the Medicis (here illustrated). It included portraits of family members in the guise of the wise men! Axyoung member of this family, Lorenzo di Pierfrancesco, was a particularly generous patron, and it appears that it was for him that Botticelli painted two of his most famous allegories, his Primavera (Allegory of Spring) in 1478, and his Birth of Venus of 1485. Regarded by many as capturing the very essence and spirit of the Renaissance, these two elegant and sensitive works combine the beauty of legend with a pagan delight in the human form. 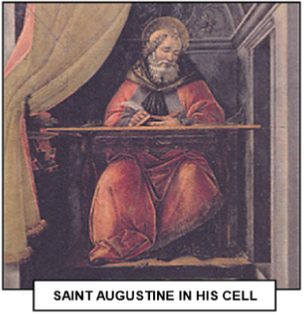 Raphael after him, Botticelli painted a number of exquisite Madonnas, including the Madonna of the Pomegranate, the Coronation of the Virgin, and Madonna of the Magnificat - a masterpiece of sheer beauty. His rendering of the saints included Sebastian and a fresco of Augustine, and he provided paintings, frescoes or altarpieces for a number of the major churches and chapels throughout Florence. At one time he worked with Perugino, Ghirlandaio and Filippino Lippi - son of Fra Filipo Lippi and a member of his workshop - on a cycle of frescoes for the young Lorenzo de Medici's villa near Volterra.

xxxxxIn 1481 he was summoned to Rome - along with a chosen few - to decorate the walls of the Sistine Chapel. It was an acknowledgement of his outstanding ability and he did not disappoint. Here he executed three of his major works, The Return of Moses, The Pursuit of Korah, and the Temptation of Christ. These survive today as a testament to his skill and sense of drama. 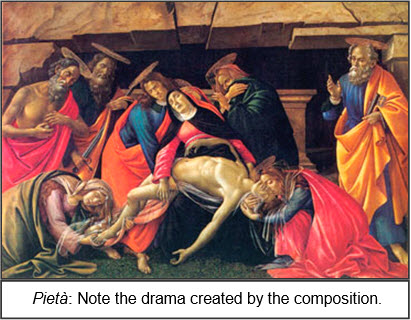 xxxxxIn 1494 life changed for Botticelli and, as a consequence, so did the style of his work. In that year the Medici were driven out of Florence by a French army, and the city came under the control of the fanatical Dominican friar Girolamo Savonarola. Botticelli was moved by his preaching, particularly his frantic call to denounce sin and the devil, and he became deeply disturbed and depressed by this prophet of doom. His paintings the Pietà, the Mystic Crucifixion, and the Mystic Nativity (now in the National Gallery in London), are works of deep religious conviction, full of emotion and harsh reality. Gone is the beauty and the serenity of yesteryear.

xxxxxAnd it is no coincidence that in the year of Savonarola's execution or soon after, he should produce The Calumny of Apelles. Here naked truth triumphs over slander, depicted as an old hag of a woman clothed in black. The painting was a re-creation of a lost work by the Greek artist Apelles, but it was also a clear indictment of those who had opposed and killed Savonarola the righteous.

xxxxxIllustrated here (left to right) are Madonna and Child with Eight Angels, Venus and Mars, and Madonna of the Magnificat.

xxxxxBotticelli was one of the greatest artists of the Florence Renaissance. He was a pupil of Fra Filipo Lippi and might well have worked alongside Andrea del Verrochio and Leonardo da Vinci. A brilliant colourist and composer, he is best remembered for his Allegory of Spring of 1478 and his Birth of Venus of 1485, works which have come to symbolise the essence and spirit of the Renaissance. Other works include the Adoration of the Magi (a tribute to the Medici), and a number of exquisite Madonnas, such as his Coronation of the Virgin and Madonna of the Magnificat. In 1481 he was chosen to work on the walls of the Sistine Chapel. Paintings here included The Return of Moses and The Temptation of Christ. In 1494 he came under the influence of the Dominican friar Girolamo Savonarola. The teaching and then the cruel execution of this fanatical preacher greatly affected his work, and he died a sad and somewhat lonely man.

xxxxxSaddened by the chaotic state of his beloved native city, and by the cruel and tragic fate of Savonarola - tortured, hanged and burnt - Botticelli spent his last years in a state of melancholy. Furthermore, deprived of the substantial income which once came from the Medici family, he fell on hard times and virtually died in obscurity in May 1510. He was buried in the church of the Ognissanti in Florence.

xxxxxIncidentally, for his chief patron, Lorenzo de Medici, Botticelli also produced a brilliant series of drawings illustrating Dante's Divine Comedy. Many are preserved in the Vatican Library and illustrate his skill as a draughtsman and the vivid nature of his imagination.