xxxxxFor centuries, the vast area comprising European Russia was a huge jumble of principalities and free cities, each determined to maintain and, if possible, extend their own authority. As they were individually weak, they were often “conquered” by larger forces, like the Mongols, known here as the Golden Horde. They arrived on the scene about the middle of the thirteenth century and from that time onwards the principalities and small city states were obliged to pay tribute in order to maintain some degree of independence.

xxxxxBy the beginning of the fourteenth century, however, the area centred around Moscow (Muscovy) began to emerge as the most powerful of the principalities. Ivan I, coming to power in 1328, was granted the title of grand duke of Vladimir by the Tatars, and with this appointment gained the right to collect tribute from surrounding states. It was on account of this service that he earned the nickname "Moneybags". During his reign he doubled the size of his realm, initiating that expansion which was to give Muscovy ultimate power throughout this vast region. It was he who moved the capital from Vladimir to Moscow, and when this city became the centre of the Russian Orthodox Church, he felt justified in styling himself “Prince of All Russia”.

have seen, as the Mongols began to lose their grip on affairs, the grandson of Ivan I, Dmitry Donskoy (illustrated), forming an alliance of neighbouring principalities, won a surprising victory over the Mongols at the Battle of Kulikovo in 1380 (R2). But success proved short lived for the Russians. Two years later the Golden Horde returned, sacked and burned Moscow and re-established their authority. By the beginning of the fifteenth century, however, following an attack on the Horde by the ruthless warrior Tamerlane in 1395, the Mongols again began to fall apart. This time they did not recover, though they went down fighting. 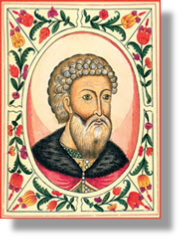 xxxxxThus it was that, when Ivan III (illustrated) came to power in 1462, he was able to begin the task of unifying the lands of Russia under Moscow control. This was only achieved after many years of bitter civil war. He moved first against his old northern rivals of Novgorod and Tver, and after a campaign lasting some eight years, he eventually accomplished his task in 1478, bringing under his control the whole of northern Russia from Lapland in the west to the Ural Mountains in the east. During this time, the Golden Horde made a number of attempts to re-impose its rule, but the attacks were beaten off. Then in 1480 Ivan the Great, as he came to be known, threw down the gauntlet, refusing to pay tribute to his once-powerful Mongol overlords. The inevitable Tatar invasion followed, but this was successfully repelled. For Muscovy and its fast expanding domain, Mongol domination had at last been overthrown. 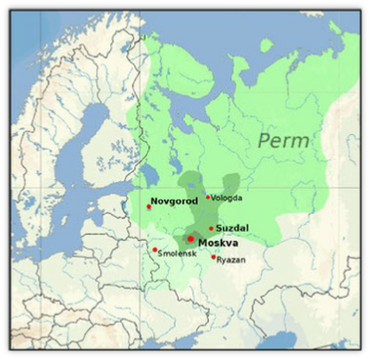 the end of his reign in 1505 Ivan III had achieved a great measure of unification within the diverse territories of European Russia, and he had pushed the state's borders far to the north (see map). As we shall see, it was to be Ivan IV, known as “The Terrible”, coming to power in 1547 (E6), who was to unite Russia into one nation and expand its domains southwards to the Caspian Sea, and eastwards into the vast Siberian wastelands that lay beyond the Ural Mountains.

xxxxxIncidentally, we are told that on his way to the Battle of Kulikovo, Dmitry Donskoy camped near the present-day town of Dzerzhinsky, just a short distance from modern Moscow. There he claimed to have seen a vision of St. Nicholas. This so inspired him that he later founded the Nicolo-Ugreshsky Monastery on the spot. Today - fittingly - his statue (illustrated above) stands in the centre of Dzerzhinsky. ……

the last Byzantine emperor, and thereby claimed to be the protector of the Orthodox Church in Russia. At about this time, he also added the Byzantine two-headed eagle to his own coat of arms and assumed the title of tsar, this being a variation on the Roman word “Caesar”.

xxxxxAs we have seen (1380 R2), the warrior Tamerlane won a decisive victory over the Golden Horde in 1395, and the Mongol force began to go into decline. This gave Ivan III, grand prince of Moscow, the opportunity to increase further the Russian domains. Despite a series of Mongol attacks, by 1478 he had brought the whole of northern Russia under his control. Then in 1480 he refused to pay any further tribute to his once-powerful Mongol leaders. A Tartar attack inevitably followed, but it was repulsed. As we shall see, with independence assured, it was to be Ivan IV, coming to power in 1547 (E6), who was to unite Russia into one nation and expand southwards to the Caspian Sea and eastwards into Siberia.