xxxxxAs we have seen the Portuguese Prince, Henry the Navigator, son of John I, established a school for seafaring at Sagres in 1419 (H5) and, over a number of years, directed the exploration of the west coast of Africa. By the year of his death, 1460, his navigators had rounded Cape Bojador and reached as far south as Sierra Leone, but no way had been found to reach India by sea. It was John II, the grandson of Henry's brother Edward, who was to resume exploration in the 1470s and achieve this coveted goal. 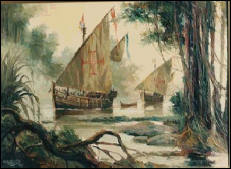 Portuguese navigator Diogo Cão (or Cam) was a one of the first explorers employed by John II. He is best remembered for being the first European to discover the mouth of the River Congo (illustrated). This is understandable, but, in fact, in a later voyage to the west coast of Africa, he managed to reach as far south as Cape Cross, near Walvis Bay (in today's Namibia) in the continuing search for this elusive route to the riches of the Far East.

xxxxxOn arriving at the mouth of the Congo in 1482 he thought at first that he had discovered the entrance to the realm of the mystical Prester John, a legendary Christian prince who was believed to rule over a powerful empire somewhere in north-west Africa. He travelled a short way up the river and found no trace of Prester John. However, he did discover that there were two large kingdoms in the area. 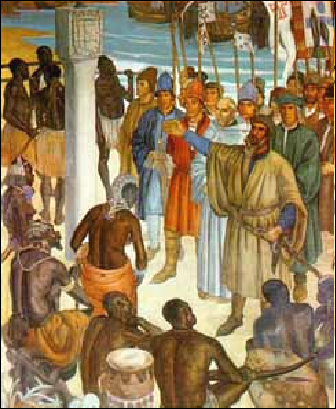 One was named Loango, and stretched north and east of the estuary, and the other Bakongo, which held the land around the mouth of the river and further south. Despite these native possessions, he at once claimed the surrounding region as Portuguese territory, and, before leaving, erected a marble pillar on the river bank (illustrated). This was engraved with the Portuguese royal coat of arms as proof of ownership. On his return home, John II of Portugal made him a nobleman, granted him a pension, and allowed him to add two pillars to his own coat of arms in recognition of his discoveries.

xxxxxDuring his visit, Cão found the natives friendly and eager to trade. Later a Congolese delegation journeyed to see John II, some traders visited the area, and Franciscan missionaries were sent out to preach the gospel. Some three hundred years were to pass, however, before exploration of the Congo region began in earnest.

xxxxxOn reaching Cape Cross during his second voyage, Cão was fairly convinced that he had reached the extreme southern tip of Africa. King John was not so sure, and sent out the navigator Bartolomeu Diaz to explore further. As we shall see, it was he who, in 1488 (H7), was to lead the first European expedition around the Cape of Good Hope and open the sea route to the Far East.

xxxxxIncidentally, for some years after Cão’s visit, the River Congo was known as the Rio de Padrao (“Pillar River”) because of the marble monument he had erected on the river bank. Later it took the name of Zaire, a word similar to the native term for “river”. It presumably acquired its present title from Bakongo, the name of the kingdom which once ruled over the mouth of the river. Cão erected four marble pillars during his voyages down the west coast of Africa. Three survived and are now in museums.

xxxxxAs we have seen, it was in 1419 (H5) that the Prince of Portugal, Henry the Navigator, opened a seafaring school at Sagres and began exploring the west coast of Africa. By his death in 1460 his expeditions had reached as far south as Sierra Leone. It was left to King John II to continue his work. One of his first explorers was the Portuguese navigator Diogo Cão. In 1482 he became the first European to discover the mouth of the Congo. He claimed the area for Portugal, and erected a pillar on the river bank as proof of ownership. On a second voyage he reached Cape Cross (in today's Namibia) and thought he had reached the tip of Africa, but, as we shall see, it was Bartolomeu Diaz who, in 1488 (H7) led the first expedition around the Cape of Good Hope.

Congo: date and artist unknown. Pillar: illustration of the pillar erected at Cape St. Mary in today’s Angola, artist unknown – possibly from a book published by Cão on his return.