xxxxxAs we have seen, by about 1370 (E3) the Chimu people had established a powerful kingdom along the north coast of Peru, based on their capital Chan Chan. Further south, however, the Incas had also set up a highly organised state around their capital Cuzco. Like the Chimus, they built massive temples and fortresses, and supported their people by a vast irrigation system and network of roads. As we have seen, by 1200 (JO) they had occupied the whole of the Cuzco valley. In 1463, under their leader Pachacuti Inca and his son Topa Inca, they embarked on a massive campaign of expansion. In 1466 they attacked the Chimu people in the north and within a few years had completely overrun their kingdom. By 1493 the Inca Empire spread from Ecuador in the north to central Chile in the south, and took in large areas of Bolivia and Argentina. Under Topa Inca's son Huayna Capac, the boundaries were extended even further but, as we shall see, all was to end with the coming of the Spanish a few years later in 1533 (H8).

xxxxxIt was in the 1250s that the Chimu people, natives of South America, settled along the northern coast of Peru around their capital city of Chan Chan. As we have seen, by about 1370 (E3) their numbers had substantially increased, and they began to expand southward. Their civilisation was based on agriculture and depended on a vast irrigation system and a network of roads. They also built enormous mud-brick mounds as bases for their palaces and temples - like the Pueblo People of central America - and they developed an advanced civilisation, producing fine metalwork, pottery and textiles, and using painted beans as a form of writing. 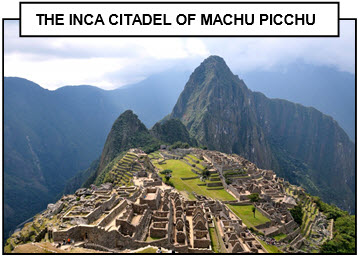 xxxxxBy the mid-fifteenth century the Chimus had built up a powerful kingdom, and their advance south had brought them into contact with the Incas. As we have seen, these people had moved into the Cuzco Valley in southern Peru in about 1100 and by 1200 (JO) had developed a highly organised state centred around their capital Cuzco. Governed by an emperor who was considered to be a descendant of the Sun, and administered by priest-rulers, the Incas depended on agriculture and, like the Chimus, built an impressive irrigation system and road network. Their fortresses and temples were likewise impressive, built of enormous blocks of stone and testifying to the advanced state of their technology. No attempt seems to have been made to develop writing, but “quipus”, knotted cords, were used to record numbers. 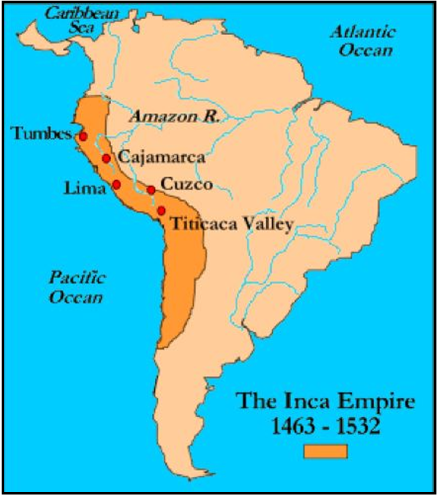 of the fifteenth century, the Incas had generally confined their settlement to the area of the Cuzco Valley, though under two of their leaders, Inca Roca and Viracocha Inca, the empire's territory had been extended some 20 miles to the south and increased around Cuzco by about the same distance. In 1438, however, with the accession of Pachacuti Inca - perhaps the greatest of all Inca leaders - all this changed dramatically. He, together with his son, Topa Inca, increased the size of the Empire a thousand-fold, a feat all the more amazing because horses did not exist and they made no use of the wheel.

xxxxxHaving assembled an efficient fighting force, they embarked upon a massive expansion programme, and within the space of some thirty years (1463 to 1493) the empire was extended over a huge area of the Andes, stretching from Ecuador in the north to the River Maule, central Chile, in the south, and including large parts of Argentina and Bolivia. Vast areas were won by military action, but the Inca army was so ruthless in conducting its campaigns and losses were so high in places, that many local kingdoms sought an alliance, offered tribute, or simply capitulated in order to avoid a costly defeat.

xxxxxIt was around the year 1466 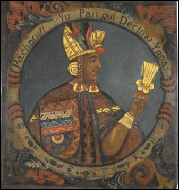 that Pachacuti Inca (illustrated) and his son joined forces in a powerful attack against the Chimu Kingdom in the north, the strongest and most advanced of their neighbours. The difficult terrain made an outright invasion impracticable, but they eventually attacked the kingdom on a number of fronts, along the coast and from the highlands inland. It is believed, too, that the Incas destroyed the irrigation system upon which the Chimu Indians depended and that this contributed to the kingdom's downfall. The territory was rapidly overrun and, following a brief but bitter battle, the capital city of Chan Chan was taken and sacked. Once in control, however, the Incas were able to absorb much of Chimu culture and to make ready use of the road and irrigation systems which served the territory.

xxxxxThe Inca Empire grew even larger under Topa Inca’s son, Huayna Capac. By the time of his death in 1527, the northern border had been extended as far as the River Ancasmayo in central Ecuador, but, as we shall see, a few years later in 1533 (H8) saw the arrival of the Spanish and the overthrow of this enormous and amazing state.

xxxxxIncidentally, Pachacuti Inca and his son Topa Inca are regarded by many military historians as amongst the greatest of the world's conquerors. Indeed, they have been likened in their achievement to Philip II of Macedonia and his son Alexander the Great. Pachacuti Inca is also remembered for his impressive redevelopment of Cuzco, and Topa Inca for his building of the Temple of the Sun. He built this on the Island of the Sun in Lake Titicaca to mark the legendary spot where Manco Capac and his sister Mama Ocllo, founders of the Inca dynasty, were sent to earth by the Sun god. (Although another legend holds that Manco Capac and his three brothers and four sisters emerged from a cave at Paqari-tampu, fifteen miles south of Cuzco!).