xxxxxAs we have seen, the Ottoman leader Mehmed II captured Constantinople in 1453 (H6) and then set out to make a world empire. Having quickly taken Anatolia and the Balkans, he waged war against Venice, and invaded the Turkish principality of Karaman in 1468, overrunning it within three years. Having no success against the Mamluk empire of Syria and Egypt, he then built a fleet and attacked the island of Rhodes. By his death he ruled from the Danube to the Euphrates, and from the Crimea to the Aegean Sea. He encouraged learning at his court, but his confiscation of private land made him unpopular. As we shall see (1517 H8), the Sultan Selim I and his son Suleyman I were to double the size of the empire. 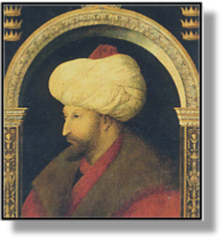 have seen, the Ottoman leader Mehmed II captured Constantinople in 1453 (H6) and in less than ten years the remnants of the Byzantine Empire had been conquered and captured. It would appear that this outstanding achievement - which, it must be said, owed much to the efforts of his predecessors - went to Mehmed’s head. He took on the title of “Roman Caesar”, and set about the making of a world empire! In the time left to him he made a good start. A series of campaigns over the next twenty years consolidated his hold on what he termed “the two lands and the two seas” - the areas of Anatolia and the Balkans between the Aegean and Black Seas.

xxxxxAt first, he directed his military might towards south-east Europe, annexing Serbia and consolidating his hold on the Morea. He also waged a war with Venice, eventually forcing the city state to surrender its bases along the Aegean coast. Then, having conquered both Bosnia and Albania, he was obliged to look to the east, where opposition to his rule was being encouraged by both the Pope and Venice. Here, he quickly put down local rebellions and, with the conquest of the Turkish principality of Karaman, begun in 1468, extended his rule to the Euphrates. There followed a victory over the Turkman Uzun Hasan, the leader who had replaced Timur's descendants in Iran. He was forced to acknowledge Ottoman rule throughout Anatolia. This success brought Mehmed into direct conflict with the Mamluk Empire of Syria and Egypt. Here, however, he met his match. His show of strength served to discourage the Mamluks from attacking the Empire, but there were no easy victories to be had.

xxxxxLooking for easier prey, he cast his 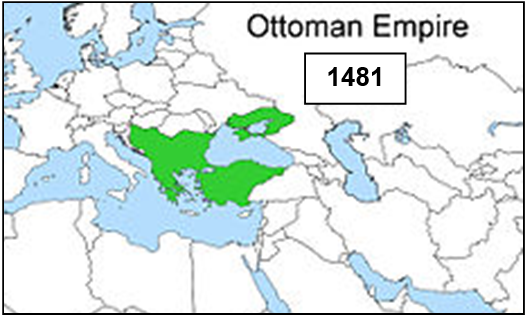 eyes across the Mediterranean and used his newly-formed fleet to attack the island of Rhodes and to send a large force to Otranto in southern Italy. This country might well have been his next target for conquest had he not died the following year. He had been ill for some time but there is also a suspicion that he was poisoned. This is feasible. To finance his numerous military expeditions he had constantly debased the coinage, and he had confiscated a vast amount of private property to bolster his own funds. As a result, there was a great deal of discontent at home. This said, he did much to improve the administration of the Empire. Furthermore, he encouraged Italian and Greek scholars to his court, and established eight colleges where high levels of learning were achieved, particularly in Muslim theology, astronomy and mathematics.

xxxxxAt his death in 1481 Mehmed II's empire stretched from the Danube to the Euphrates, and from the Crimea to the Aegean Sea (see map above). As we shall see (1517 H8), it was to prove a sound base for further expansion by the Sultan Selim I and his son Suleyman I. Under them the Ottoman 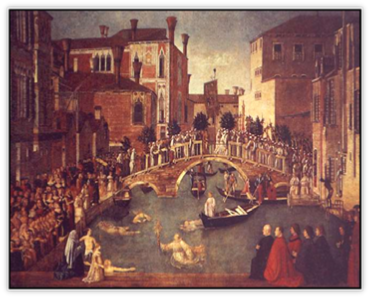 Empire was to more than double in size.

xxxxxThe portrait above of Sultan Mehmed II was painted by the Venetian artist Gentile Bellini (1429-1507). He was invited to Constantinople and completed the work in 1480. This is now in the National Gallery in London. Many of his works were religious narrative paintings, and through them he gained an enviable reputation. He was often commissioned to paint special events - usually with a religious theme - and this enabled him to portray everyday life against the background of his native city of Venice.

xxxxxA good example of this type of work is the one entitled The Miracle of the Cross on San Lorenzo Bridge, illustrated here. This is full of detail and interest, and is infused by a soft, warm light. His paintings, which are straightforward representations of his subject and have little emotional content, often contained portraits of contemporary notables of the city, and this heightened their appeal. Shown below are his Procession in St. Mark’s Square, and St. Mark Preaching in Alexandria. 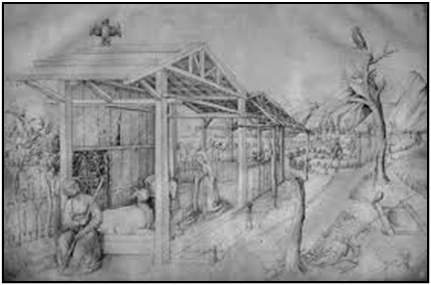 taught by his father, Jacopo Bellini (1400-70), also a painter of some note. He is remembered above all for his two large books of drawings, used in his workshop to assist in composition. One of these books is in the Louvre and the other is in the British Museum. Illustrated here is his Nativity. But surpassing the achievements of both Gentile and his father Jacopo, are the works of Giovanni Bellini, Gentile's younger brother. As we shall see, he was appointed painter to the Venetian Republic in 1483 (R3), and was the city's most talented artist until his death in 1516.