xxxxxA successful textile merchant on the continent, it was not until he was 50 that the Englishman William Caxton turned to the art of printing. He set up a press in Bruges, Belgium, and it was here that he produced the first book printed in English, a translation of a French romance entitled Recuyell of the Historyes of Troye. He returned to England in 1476, and it was in that year that he established his wooden printing press at Westminster in London. From here he published more than 90 books, including works by Chaucer, Malory and Gower, and some of his publications have survived. Most of his work was in English and this greatly helped to shape the language and develop English literature. 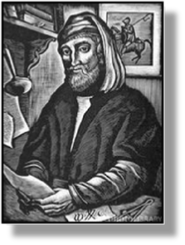 Englishman William Caxton was born in Kent and began his working life as an apprentice to a London cloth dealer. In 1441, he established his own textile business at Bruges, then the centre of the wool trade, and it was not until thirty years later, when he was fifty years old and a very successful merchant, that he visited Cologne and began to learn the art of printing. Hexthen founded a press in Bruges, Belgium, in partnership with Colard Mansion, a local calligrapher, and it was here that in 1474 he produced the first book printed in English, his translation of Recuyell of the Historyes of Troye, a French courtly romance by Raoul le Fèvre.

xxxxxHe returned home in 1476, and it was in London, in a rented house close to Westminster Abbey, that he established the first wooden printing press in England. Here in the following year he produced his first dated book, Dictes or Sayenges of the Phylosophers. In all, he published more than ninety books, some in several editions, including works by Chaucer (The Canterbury Tales), Malory (Le Morte d'Arthur) and Gower (Confessio Amantis), together with his own translations of Latin works and 21 French romances. Today, some forty of his publications exist, a number of them in fragments.

xxxxxAs a printer he was not particularly 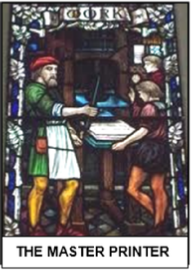 outstanding. He made no startling innovations in the printing process, and none of his books could be regarded as works of art. His value lay in the fact that nearly all his publications - at least seventy - were in English, and this helped to shape the language and provide some uniformity in spelling and construction. For that reason alone, he exerted an important influence upon the development of English literature. Among his wealthy patrons and customers, he could number Edward IV himself and, later, Richard III and Henry VII. Such a select clientele sometimes commissioned special books, but his Myrrour of the Worlde, published in 1481 - the first English book to include illustrations - catered for the general public. A page from this book is i 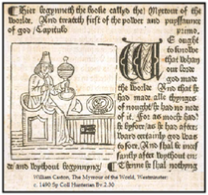 xxxxxIncidentally, in the epilogue to book 3 of Recuyell of the Historyes of Troye, Caxton explains why, at the age of 50 and very comfortably off, he suddenly decided to learn the art of printing. Apparently as early as 1469 he began to translate this work by the French writer Raoul le Fèvre, but found the going tough. He writes that his pen became worn, his hand weary and his eye dimmed. He put the work aside and later, when he was semi-retired, he decided to take up printing and print rather than write the translation. And that is how England begat its first printer! 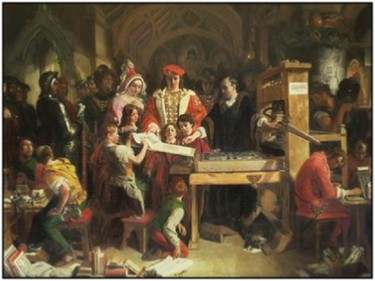 xxxxxA detail of a painting by the Irish artist Daniel Maclise (1811-1870), 1851, in which Caxton is showing some of the the first examples of his printing to King Edward IV and Queen Elizabeth at his printing works at the Almonry, Westminster, London – contained in a series entitled Highroads of History, published by Thomas Nelson around 1920.