xxxxxAs we have seen, Edward IV died in 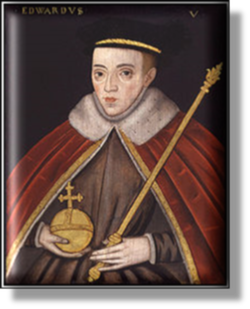 1483, having appointed his brother, Richard, Duke of Gloucester, as Protector until his son, Edward V, came of age. The young Edward succeeded his father at the age of twelve, but was deposed three months later in favour of his uncle, Richard, on the grounds that his parents had not been properly married and he was therefore illegitimate.

xxxxxAfter Richard had been crowned king in July, the young Edward and his younger brother, Richard, Duke of York, were never seen in public again. It is generally believed that Richard had both boys murdered in the Tower of London. They were probably smothered to death while they slept. However, this has never been proved.

xxxxxSoon after the death of Edward IV in April 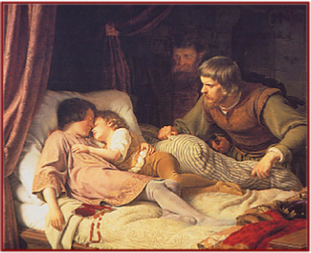 1483, - and whilst the Protector, Richard Duke of Gloucester, was away in the north - the Queen arranged to have her two sons, Edward and Richard, brought to London from Ludlow (in Shropshire) so that Edward’s coronation could be planned for the 22nd of June. Gloucester got word of the move, however, and he and the Duke of Buckingham intercepted the children en route to London. Claiming that the Queen was hatching a murder plot, he took charge of Edward and housed him in living quarters in the Tower of London. His younger brother, Richard, joined him in the second week of June.

xxxxxIt was then that the two boys were declared illegitimate. The Bishop of Bath and Wells conveniently pointed out to Gloucester that when Edward IV had married Elizabeth Woodville - the mother of the two boys - he was already “betrothed” to Lady Eleanor Butler. As this commitment to marry was tantamount to marriage, Edward's “marriage” to Elizabeth Woodville was not lawful. When parliament, amid uproar, met to discuss the matter towards the end of June, it was decided to offer the crown to Richard, the named “Protector”. He was crowned on the 6th July in Westminster Abbey as Richard III.

xxxxxNothing more was heard about the two boys. They were seen at the windows of their apartment on a number of occasions up to August, but not afterwards. As noted, it is generally believed that they were murdered by Richard's agents - this explanation certainly favoured the Tudors - but they might well have been killed by the Keeper of the Tower Lord Howard (later Duke of Norfolk). He inherited vast estates as a result. And there is some evidence to suggest that they were alive at the time of the Battle of Bosworth Field, where Richard was killed. In that case they might well have been murdered by the first Tudor king, Henry VII.

xxxxxIncidentally, during repairs in 1674, a wooden chest was discovered under a pile of stones beneath the stairs to the chapel of the white tower. It contained the bones of two young children. On the direction of the king, Charles II, they were put in a white and black marble urn, designed by Christopher Wren in 1678, and this was buried in Henry VII's chapel in Westminster Abbey. In 1933 the bones were forensically examined and found to be those of two boys around the ages of the two princes, but that was as far as the evidence could go.