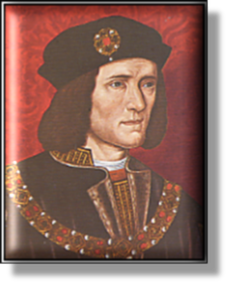 Richard came to the throne under strange and suspicious circumstances. He had been appointed Regent for Edward V in 1483, as his brother had willed, but in the same year he accepted

Parliament’s offer of the crown following a suggestion by the Bishop of Bath and Wells that Edward’s parents had not been properly married and therefore an illegitimate child could not inherit the crown. The argument ran that before Edward IV had married Elizabeth Woodville (illustrated), he had made a contract to marry another woman and thus his marriage was illegal. To many this conclusion appeared both handy and contrived.

xxxxxFollowing Richard’s coronation, Edward, aged 12, and his younger brother, Richard, Duke of York, were never seen again. Given the sequence of events, it is hardly surprising that Richard III has generally been regarded as their murderer. It is likely that they were killed on his orders after they had been taken to the Tower of London, but there is no firm evidence to that effect.

xxxxxRichard proved a capable ruler, reforming the administration of justice, improving tax collection, and taking measures to control the balance of payments. He was not lacking in wisdom or courage, but the doubt and suspicion surrounding the disappearance of the two young princes served to undermine his authority and popularity. Just two years after his succession, Henry Tudor, Earl of Richmond, led a rebellion against him and Richard was defeated and killed at the Battle of Bosworth Field in 1485.