xxxxxOne of the most outstanding artists of the Venetian school, Giovanni Bellini, was appointed painter to his native city in 1483. He was born into an artistic family, but his work and reputation surpassed both his father, Jacopo, and his brother Gentile Bellini. During a career spanning over sixty years, during which his achievement continued to grow, he produced a wide variety of styles. His accomplishments brought the Venetian school into the mainstream of Renaissance art, and made the city of Venice an art centre to rival that of Florence and Rome. 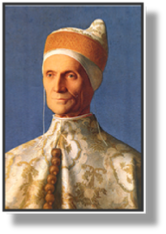 xxxxxHis early work, such as The Agony in the Garden (National Gallery, London), shows by its firmness of line the influence of his brother-in-law the Paduan artist Andrea Mantegna. On the other hand, The Doge Leonardo Loredan (also in the National Gallery, London) has the rich colours associated with Flemish artists, and clearly illustrates his mastery of the new technique of oil painting, particularly in the art of glazing. This work (illustrated) is a remarkable portrait, depicting so cleverly by form, colour, light and shade the splendour and pomp of Venice itself. In general, his painting is characterised by a gentle, tender interpretation in which a subtle balance of colour and light not only enhances the subject matter, but also creates the appropriate mood of the landscape or setting. This is perhaps best seen in his panel depicting St. Francis in the Desert (1480), and in his Madonna with Saints, painted for the church of San Zaccaria in 1505. 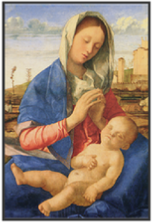 produced paintings for numerous churches and public buildings, the majority of them in his native city of Venice. Many of these were variations on the theme of the Virgin and child, a particular fine work in this genre being his Madonna of the Meadow (detail illustrated). Notable among his monumental altarpieces are his one for San Giobbe - in which the architecture in particular plays a vital part in creating the harmony and grandeur of the scene - and The Doge Barberigo kneeling before the Infant Christ, a work in High Renaissance style in which the portrayal of the Madonna is thought by some to be the loveliest in all Italian art.

xxxxxAt one period he spent some time in the Doge’s palace producing a series of paintings depicting the history of Venice, started earlier by his brother Gentile, but these were destroyed by a fire in 1577. The vast majority of his extant work, and that of his workshop, was devoted to religious themes, though he did paint one female nude, Young Woman at Her Toilet (sometimes known as The Toilet of Venus), purely to show, it would seem, his ideal of feminine beauty. It is illustrated below, together with Agony in the Garden, The Redeemer, and Portrait of a Humanist.

xxxxxThe Venetian painter Giovanni Bellini, the leading member of an artistic family, produced a wide variety of styles during his long career and, as painter to the Venetian Republic, appointed in 1483, did much to enhance his city's artistic reputation. His early works were noted for their firmness of line, but he later came to master the new technique of oil painting, using the rich colours associated with Flemish artists - as can be seen in his The Doge Leonardo Loredan in the National Gallery, London. The majority of his paintings were for churches and public buildings in his native city, and most were religious in theme. His interpretation was remarkably gentle, and this was intensified by a subtle balance of colour and light. His architectural features, particularly in his large altarpieces, added grandeur and harmony to his scenes. He numbered among his pupils Giorgione and Titian, and they influenced his later works. The German artist Albrecht Durer visited Venice in 1506 and spoke highly of his work.

xxxxxGiovanni’s brother-in-law, Andrea Mantegna (1431-1506) was a Paduan. He is best known for his contribution to the science of perspective. Influenced by the works of the Florentine sculptor Donatello, he carried out a number of experiments to produce a three-dimensional effect. That he achieved this can be seen in his painting of a small bridal chamber in the ducal palace at Mantua. Here he created the illusion of a high domed ceiling where cherubs peer down from a circular balcony. This “ceiling illusion” was later employed by the Paduan artist Correggio and artists of the baroque period. Even more dramatic in the matter of perspective was his The Dead Christ, completed in 1465. Viewed from the feet, the skill of foreshortening is taken to its limit. One of his more conventional works is to be seen at Hampton Court Palace near London. Completed in 1492, it is made up of nine large canvases depicting a colourful and splendid procession entitled The Triumph of Caesar.

xxxxxAs noted above, Andrea Mantegna, Giovanni's brother-in-law, was a Paduan artist, born in 1431. His paintings, frescoes and engravings show a high regard for the art of the ancient world and, as a result, his figures were very statuesque in form, as though chiseled out of stone. In the matter of colour technique and general design - particularly when it came to antique architecture - he owed much to the skill and the drawings of his father-in-law, Jacopo Bellini. 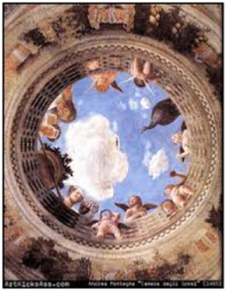 xxxxxIt was in the science of perspective, however, that Mantegna made his greatest contribution to the art world of his day. The brilliant Florentine sculptor Donatello worked at Padua from 1443 to 1453, and Mantegna became fascinated by his compositions, particularly his bronze reliefs for the high altar at the church of San Antonio. This led him to experiment as to the various points from which a subject could be viewed, and the effect each viewpoint had upon the background beyond. His early attempt at linear perspective was successfully achieved in his illustration of the Martyrdom of St. James, a decoration on one of the walls of the Ovetari Chapel in Padua’s Eremitani Church. Here, by positioning the work in relation to the spectator's eye level, he managed to give both figures and buildings a three- dimensional effect. 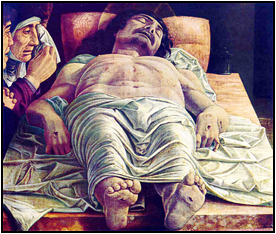 xxxxxUnfortunately, this original piece of work has been lost, destroyed during the Second World War, but later, as court painter to the Gonzaga family at Mantua, Mantegna went on to produce other projects as part of this experimental work in compositional technique. It was here, at the ducal palace, that he painted a small, interior bridal chamber (the Camera degli Sposi) so as to create the illusion of an elegant pavilion with a high domed roof, open to the sky (detail illustrated above). Members of the family and others are put in relief along the decorated sides of the room, whilst the ceiling takes on the shape of a cupola with a circular balcony over which cherubs and ladies peer down at the scene below.

xxxxxThis “ceiling illusion”, the first to be produced in the Renaissance period, was later employed by the Paduan painter Correggio, and it also became a favourite device of Baroque artists. Another painting notable for its unusual composition is The Dead Christ, completed in about 1465. Here, the skill of foreshortening is taken to its limit, as shown in the illustration above. 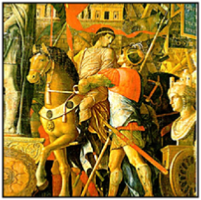 xxxxxA later work, completed in 1492 and now on display at Hampton Court Palace, near London, is made up of nine large canvases, each nine feet square, and originally intended as a frieze. Depicting the Triumph of Caesar, it indulges his passion for classical art, but the figures are more life-like, moving somewhat away from the rigid form of his earlier compositions. After completing this colourful and splendid procession, he was invited to Rome by Pope Innocent VIII to decorate his private chapel in Belvedere Palace, a building that was later destroyed.

Illustrated here are The Court of Mantua, The Adoration of the Magi, and Madonna with Child.

xxxxxFollowing his death in 1506, a chapel in the church of Saint Andrea in Mantua was dedicated to his memory. Decorated with frescoes and with a domed roof - possibly painted by Correggio - it was a fitting tribute to a man who had served the city so long and so well.

xxxxxHe numbered among his many pupils both Giorgione and Titian. Destined to surpass him in world fame, they clearly influenced the style of his later work. In The Feast of the Gods, for example, one of his rare mythological compositions, completed as late as 1514, it is thought that the landscape was devised by Titian and that, in addition, he might well have amended the work itself. Nevertheless, after visiting Venice in 1506, the German painter and engraver Albrecht Durer could write of Giovanni, “He is very old and still he is the best painter of them all”.