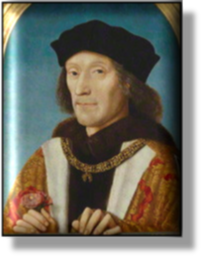 founder of the Tudor dynasty, came to the throne by conquest, beating and killing Richard III at the Battle of Bosworth. He had spent his early days in Brittany, but he had a valid claim to the English throne. He was the son of Edmund Tudor, Earl of Richmond, and he was descended from John of Gaunt through his mother, Margaret Beaufort. In addition, his marriage to Elizabeth, eldest daughter of Edward IV, in 1486 united the warring houses of York and Lancaster and did much to pacify the country. Even so, he was faced with Yorkist rebellions for a number of years and, as we shall see, had to deal with two impostors, Lambert Simnel and Perkin Warbeck, both lightweights in themselves, but a real danger in the manipulative hands of his enemies.

xxxxxTo reduce further the risk of insurrection, particularly among a restless nobility, his institution known as the Court of the Star Chamber, held in the royal palace of Westminster from 1487, meted out justice to any nobleman who thought himself above the law. In addition, his Acts of Livery and Maintenance (1487 and 1504) forbade the nobles to keep large private armies. Furthermore, the income from this royal court and that of the King's bench, together with trading treaties with various European powers, brought him a fortune and made him independent of Parliament. Henry was a careful, calculating kind of man, and his near obsession with making money did not win him a bundle of friends, but it made the country solvent and provided a good foundation for future expansion in the growing markets of the known world and the New World.

xxxxxIn the matter of marriage diplomacy, Henry also proved a shrewd operator. Two arranged marriages greatly strengthened England’s standing in Europe, that of his son Henry to Catherine of Aragon, and the marriage of his daughter Mary to the archduke Charles, later to become Emperor Charles V. These were catches indeed, but they illustrate above all the growing esteem in which England was now held in the courts of continental Europe.

xxxxxBut the reign was not without its troubles - far from it. In 1497 a revolt broke out in Cornwall over taxes and this had to be put down. Furthermore, Lambert Simnel attracted a sizeable force of Yorkists and hangers-on to his cause, and, because of the French support for Perkin Warbeck - weak though his claim was - an invasion of France had to be mounted to nip that support in the bud. And for the same reason, Henry was obliged to send Sir Edward Poynings to Ireland. A law passed at the Parliament of Drogheda in 1494 and bearing his name marks the subservience of Ireland to England and a renewal of the pain and suffering that this was to bring in its wake. 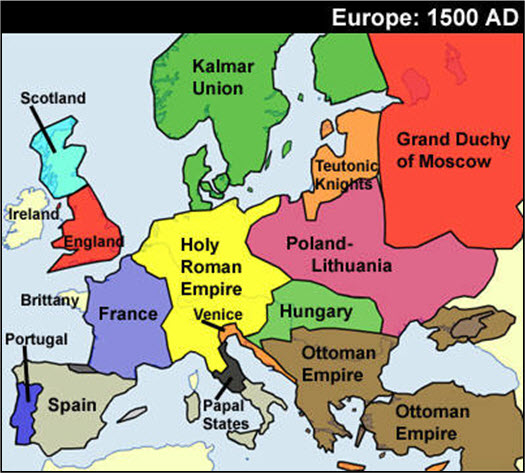 xxxxxBut despite these troubles, it is clear that during this reign England was at last given a period of comparative peace and prosperity. When Henry died of consumption in 1509 and was buried in the chapel he had had built for himself in Westminster Abbey, he handed over to his son a country in good order and ready for a challenge - and there were many to be had. Within the space of ten years the sea route to India had at last been opened - lengthy though it proved to be - and a vast new continent had been discovered across the Atlantic. Henry had himself played a part in this exploration by his support for the Venetian navigator John Cabot. For those European states whose lands bordered the Atlantic the future held out immense possibilities.

xxxxxIncidentally, Henry's famous Court of the Star Chamber was so called because the room in which it was held had stars painted on the ceiling. The court itself had wide-ranging powers, being able to impose fines, prison sentences and mutilation. It also had the right to permit torture in the extracting of confessions. This, together with other royal courts, did much to strengthen Henry's hold on the country after the oft-time turbulence of the fifteenth century. ……

xxxxx…… Henry confided in no man and trusted few, but he made particularly good use of the services of three loyal servants, Cardinal John Morton and two lawyers, Sir Richard Empson and Sir Edmund Dudley. They used various means to raise money for the king, including extortion and the selling of pardons, and were hugely unpopular. Morton died in 1500, but Empson and Dudley were beheaded on charges of treason soon after Henry VIII came to the throne. ……

xxxxx…… When Henry became king the population of England and Wales was little more than three million. By 1870, in the reign of Queen Victoria, it was close on 23 million!