xxxxxYou might recall that it was in 1170 (H2) with the blessing of the then Pope Adrian IV, that Henry II took the first step on the long road to the English conquest of Ireland. He sent the 2nd Earl of Pembroke, known as 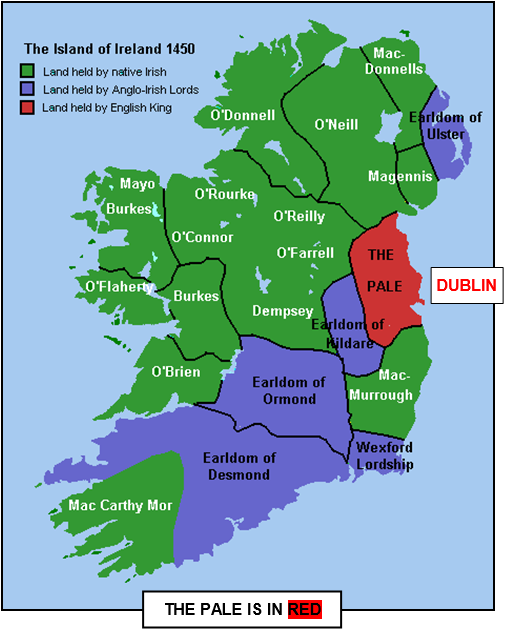 “Strongbow”, to quell any opposition and then he himself landed at Waterford the following year and had the Irish kings submit to his rule. But this Anglo-Norman “conquest” was far from complete and, by the end of the century, only Dublin and the surrounding area (the “Pale”) gave any allegiance to the English crown. Ireland had gone back to the Irish.

xxxxxThus for many years political power in Ireland lay in the hands of the ruling families, and by the middle of the fifteenth century the government of the country had devolved upon the house of Fitzgerald, the Earls of Kildare. They created the office of Lord Deputy in 1471, and when Henry VII came to the throne in 1485, this position was held by Gerald Fitzgerald, the eighth Earl of Kildare. Sensing that the Tudors would not survive long, he threw in his lot with the opponents of the king and gave support to both pretenders to the English crown, Lambert Simnel and Perkin Warbeck. Both of them used Ireland as a shelter and base, and both attracted a sizeable force in support of the Yorkist cause.

xxxxxIn 1494, to counter this threat, Henry dispatched the soldier and diplomat Sir Edward Poynings to Ireland. He had been a rebel against Richard III and, having thus gained the favour of Henry Tudor, was employed in the service of the king when he came to power. He was given three tasks: to defeat the Yorkist rebels, to restore the royal revenue - then down to a trickle -, and to ensure that any future government in Dublin toed the Tudor line. He did manage to overthrow the Earl of Kildare - though large areas of the north remained openly hostile -, but his attempts to revive revenue for the royal purse met with almost total failure.

xxxxxHowever, where he did succeed - and got his name in the history books as a result - was in curbing the power of the Dublin government. By what came to be known as Poynings' Law, enacted by a parliament at Drogheda in 1495, the Irish parliament was forbidden to meet without permission of the English Lord Chamberlain, and not before legislation proposed by Dublin had been approved by the English king and his council. A corollary to that was that no amendments to legislation could be made within Ireland. 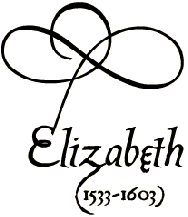 xxxxxBut Poynings adventure into Irish politics was not to be a long one. Having been appointed Lord Deputy of Ireland in September 1494, he was recalled by Henry in 1496, mainly because the new administration was proving far too costly. Kildare was restored and his young son succeeded him, but in 1533, when Henry VIII fell foul of the Catholics, he put an end to the Kildare “dynasty”. It was to be many years before an Irishman would again hold the reins of power in Ireland. In the meantime, as we shall see (1561 L1), it was to be the sword, not the pen, by which the English monarchy strove to become masters of their kingdom across the Irish Sea.

xxxxxIncidentally, following Henry II's attempt at conquest, the small area around the cities of Dublin and Drogheda, where English rule had been maintained, came to be known as “The Pale” (from the Latin word for “stake”). Thus the phrase “beyond the Pale” has come to mean something which is not acceptable because it is outside the recognised boundaries (or fencing).

xxxxxAs we have seen in 1170 (H2), the Earl of Pembroke (“Strongbow”) had been sent to conquer Ireland. The following year Henry II received the homage of the Irish kings. However, by the end of the century only Dublin and the surrounding area (the “Pale”) were loyal to the English monarch. Over the years the Fitzgeralds became the ruling house, and in 1485 Gerald Fitzgerald, the eighth Earl of Kildare, openly opposed the Tudors, giving support to the two pretenders to the English throne Lambert Simnel and Perkin Warbeck. As a consequence, Sir Edward Poynings was dispatched to Ireland to bring the Irish to heel. By Poynings’ Law of 1495 the Irish government was put firmly under the authority of the English crown - but not for long. The cost of running Ireland proved too much, and Kildare was restored in 1496. Henry VIII put an end to the Kildare “dynasty” in 1533, but, as we shall see (1562 L1), it was left to Elizabeth I to use the sword rather than the pen in an attempt to gain control of her Irish domains.

Map (Ireland): by courtesy of the Author: http://www.wesleyjohnston.com. Licensed under Creative Commons – en.wikipedia.org.