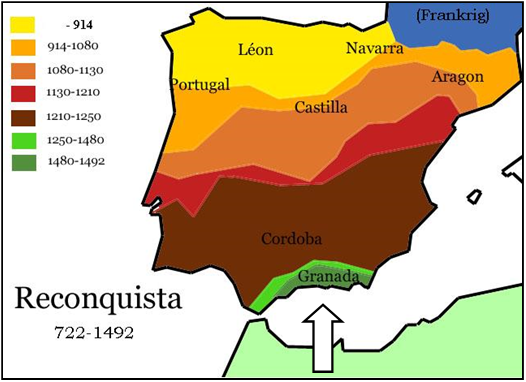 we have seen, the beginning of the end of Muslim power in Spain came in 1212 (JO) with the battle of Las Navas de Tolosa. It was then that a large Christian force led by Alfonso VIII, king of Castile, defeated the army of the Almohads. Within twenty years the Almohad empire was on its last legs, and virtually came to an end when Ferdinand III of Castile and Leon captured Seville in 1248.

xxxxxBut the final overthrow of the Muslim invaders was to be a long time in coming. It was not until 1469 (E4), with the marriage of Ferdinand of Aragon and Isabella of Castile, that the joint union of these two major kingdoms set the stage for the making of Spain as a national state. By that date the only Muslim area remaining in Spain was situated in the south-east corner of the country, centred around the city of Granada and its fortified hill-top palace of the Alhambra (arrowed on the map above). Surprisingly, this little Muslim kingdom had survived for nearly one and a half centuries. There had been occasional skirmishes along the city walls but, for the most part it had remained isolated and at peace. Indeed, during this period it had became an important centre of learning. Having replaced Cordoba as the capital of the remaining Moorish territory, Granada had became a rich and flourish trading city, and a recognised centre for the encouragement and advancement of art, literature and science. 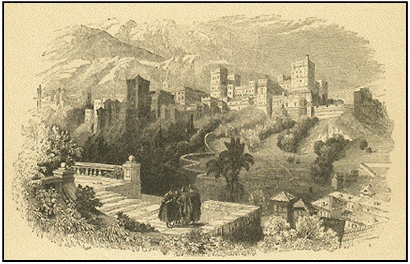 beginning of its end came in 1481, however, when the Spanish monarchs, Ferdinand and Isabella, resumed their “crusade”, determined to rid their country of the one remaining area of Moorish rule. After a costly campaign which lasted more than ten years, the Moorish kingdom was slowly reoccupied. With help from all over Europe and a formidable use of artillery, the Moorish strongholds - such as the cities of Ronda, Loja, Malaga and Baza - were slowly but soundly captured. Eventually in 1492 the last Sultan, Boabdil, capitulated and handed over the keys of the city of Granada (illustrated). Its fortress was occupied, thus consolidating the power of the Spanish rulers over their joint kingdom. There followed an attempt by force to convert the Muslim population to the Christian faith. This led to a serious Moorish revolt, but opposition was ruthlessly suppressed, and in 1501 Ferdinand declared Granada a Christian kingdom. Muslims were given the choice of conversion or expulsion.

xxxxxIncidentally, the first monarchs of a united Spain, Ferdinand and Isabella, are buried in the city's cathedral.

xxxxxAs we have seen, the beginning of the end of Muslim power in Spain came in 1212 (JO) with the Christian victory at the Battle of Las Navas de Tolosa. With the capture of Seville in 1248, only an area, centred on Granada, remained in Muslim hands. Over the next century and a half this tiny kingdom remained at peace, and flourished as an important centre of trade and learning. However, with the marriage of Ferdinand of Aragon and Isabella of Castile in 1469 (E4), the stage was set for the making of a Spanish national state. They launched a “crusade” against this Moorish enclave and, during a war lasting more than ten years, the major strongholds were slowly forced to surrender, and the city of Granada itself was finally taken in 1492. In 1501 Granada was declared a Christian kingdom, and Muslims were given the choice of conversion or expulsion.