xxxxxCanterbury was the site where King Ethelbert welcomed St. Augustine at the start of his mission in 597. The city has been the centre of the Anglican Church ever since, and the seat of the Archbishop of Canterbury, leader of the Church. The name derives from the old English Cantwarabyrig - meaning “the men of Kent’s fortress” - at a time when the city was the Saxon capital of Kent. The foundations of a Saxon cathedral were uncovered here as recently as 1992. 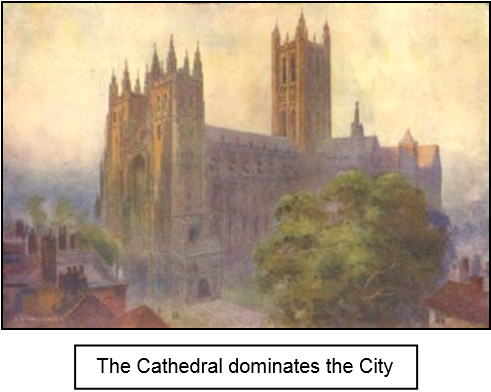 xxxxxAs we have seen, work on the present-day cathedral was begun in the time of William the Conqueror when the foundations were laid by Archbishop Lanfranc. The first stage of its construction was completed in 1503 after a series of changes ranging from the Romanesque to the Perpendicular style. It became an important centre of pilgrimage following the murder of Thomas Becket in front of the altar in 1170 (H2). It was the journey of a party of pilgrims to the archbishop’s shrine that formed the basis of Chaucer’s Canterbury Tales, not completed at his death in 1400. The shrine was destroyed by Henry VIII in 1538, during the Reformation.

xxxxxThe early work on the cathedral was begun by the French master mason William of Sens following a fire in 1174, but he was injured when falling from some scaffolding and the work was continued by “William the Englishman”. The choir is of the Romanesque period, and some of the stained glass in the choir and sanctuary dates from the latter part of the 12th century and is regarded as the finest in England. The great tower, known as Bell Harry, was built at the end of the 15th century, during the final stages of the construction. Henry IV and the Black Prince are buried in the cathedral.

xxxxxIncidentally, at the end of the 16th century the large crypt below the cathedral was granted to Huguenot refugees, French Protestants, who had been forced to leave their country because of religious persecution. To this day a service in French is held there once a week. 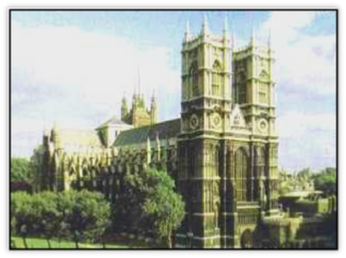 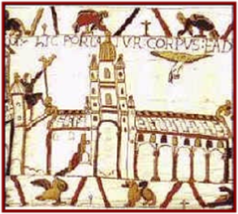 one of Britain’s most important historical buildings, contains the shrine of Edward the Confessor, tombs and memorials of famous British subjects - including outstanding literary figures in Poets’ Corner - and the Tomb of the Unknown Soldier. Every monarch since William the Conqueror has been crowned in the abbey (with the exception of Edward V and VIII, neither of whom was crowned), and many kings and queens are buried near the shrine of Edward the Confessor or in Henry VII’s chapel. Since the reign of George III, however, all monarchs have been buried at Windsor. The pictures here show what the abbey is like today and how it was seen in the Bayeux Tapestry in 1077. The present- day church was begun by Henry III in 1245. 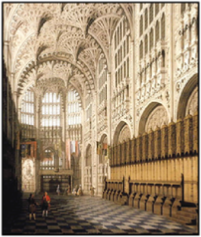 xxxxxIn 1503 Henry ordered the construction of a large chapel in Westminster Abbey. Built on the site of an earlier Lady Chapel, the Henry VII Chapel (illustrated) is a fine example of Late Gothic architecture with its fine tracery and the delicate design of its fan-shaped vaulting.

xxxxxIncidentally, Westminster Abbey - first known as the West Minster, is one of a small number of churches in England that are “royal peculiars”. Such a church is managed by a dean who answers only to the monarch, not to a bishop or archbishop, which is normally the case.

xxxxxIt was at Canterbury that King Ethelbert welcomed St. Augustine at the start of his mission in 597. Since then the city has been the centre of the Anglican Church and home to its leader. Foundations were laid in the reign of William I, and the first stage was completed in 1503, with architectural styles ranging from the Romanesque to the Perpendicular. Following the murder of Thomas Becket on the altar steps in 1170 (H2), his tomb became a shrine, but this was destroyed during the Reformation. Some of the stained glass dates from the late 12th century, and is amongst the finest in England. The great tower (Bell Harry) was built at the end of the 15th century. Henry IV and the Black Prince are buried in the cathedral.