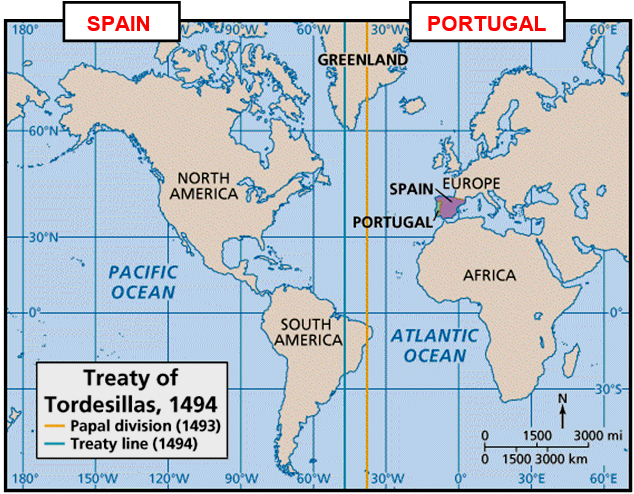 following the discoveries of their protégé Christopher Columbus, the Spanish rulers Ferdinand and Isabella were understandably anxious to secure their territories against the incursions of their seafaring rivals, the Portuguese. In that year they enlisted the support of the then Pope, Alexander VI - who happened to be a Spaniard! - and he issued a series of papal bulls to settle the claims of Spain and Portugal to the uncharted lands of the “New World”. As one might expect, the imaginary line of demarcation set up by these bulls was very much in favour of the Spanish, though to be fair, the full extent of their gains was not realised at the time! It ran due north and south 100 leagues (some 300 miles) west of the Azores and the Cape Verde Islands. All new, non-Christian lands discovered to the east of that line were to belong to Portugal, and all those to the west of it were to go to the Spanish. These two countries were to have a monopoly of navigation and conquest in these dedicated regions; no other country was to get a look in!

surprisingly, King John II of Portugal wasted no time in challenging this arrangement. He claimed that such a line restricted his country's voyages to those along the African coast and, perhaps more to the point, did not recognise discoveries that the Portuguese had already made in the waters of the so-called New World. As a result, in 1494 a meeting was held at Tordesillas, in north-west Spain, between Spanish and Portuguese ambassadors. They reaffirmed the papal division but, in order to avoid future conflict, agreed that the line be moved a further 270 leagues (another 810 or so miles) to the west. As it so happened, this new boundary enabled Portugal to claim the coast of Brazil, discovered, as we have seen, by the Portuguese explorer Pedro Cabral in 1500.

xxxxxNeedless to say, this agreement, which was finally sanctioned by Pope Julius II in 1506, was never accepted by any of the other European powers situated along the Atlantic seaboard!

xxxxxIn 1492 Pope Alexander VI, a Spaniard, issued a series of papal bulls to settle the claims of Spain and Portugal to the uncharted lands of the New World. The line ran north to south some 300 miles west of the Azores. All new non-Christian lands to the east of this line were to go to Portugal, and those to the west to Spain. This division was challenged by the king of Portugal, John II, and by the Treaty of Tordesillas in 1494 the line was moved about 800 miles westward. This enabled the Portuguese to retain Brazil when the country was claimed for them by Pedro Cabral in 1500. Needless to say, none of the other seafaring nations of Europe accepted this agreement!