xxxxxAs we have seen, in 1488 the Portuguese 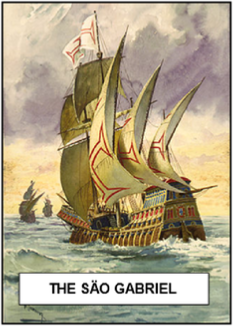 navigator Bartolomeu Diaz became the first European to lead an expedition around the Cape of Good Hope, and open the sea route to the Far East.

xxxxxThe man chosen to take advantage of this momentous discovery was his fellow countryman Vasco da Gama, a nobleman with experience as a soldier as well as a sailor. Appointed to command a voyage of exploration in July 1497, he stayed well out to sea until taking fresh water and provisions at the Cape Verde Islands. Then, keeping out of sight of land for 13 weeks, he reached St. Helena Bay on the west coast of South Africa before rounding the Cape of Good Hope, a stormy voyage of almost three weeks. He reached the east coast of Africa on Christmas Day, naming the area Natal, and then called in at Mombasa - where the natives were hostile - and then at Malindi, before crossing the Indian Ocean. He arrived at Calicut (now Kozhikode) on India’s Malabar coast in May 1498. He returned home the following year, his three ships loaded with spices, but it took three months to reach Africa, and so many of his men died of scurvy that it was necessary to destroy one of the ships for lack of crew. 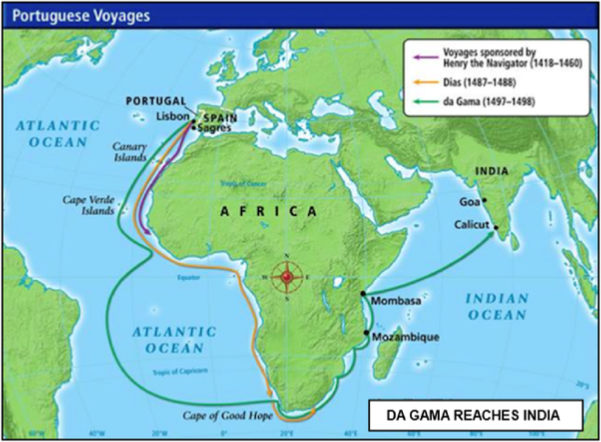 the success of this first voyage to India, a second expedition was launched in 1500, this time led by the navigator Pedro Cabral. It was he who, sailing too far west on leaving Lisbon reached India via Brazil and claimed this huge land for Portugal! On eventually reaching India, he established a trading post at Calicut on the west coast. It was during this expedition that Diaz was drowned during a storm off the Cape of Good Hope.

xxxxxIn 1502, following reports of the murder of a number of Portuguese in Calicut, Vasco da Gama led a punitive expedition to India and attacked and plundered the port. In the same year, he founded the Portuguese colony of Cochin on the Malabar coast and established a Portuguese presence in Mozambique along the south-east coast of Africa. He was sent to India some twenty years later, following a long period of retirement, but died in Goa two months after taking up the post of Portuguese viceroy. 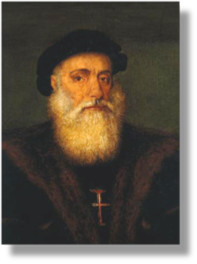 Vasco da Gama, together with those of his contemporaries, Diaz and Cabral, opened up a new chapter in world history, providing Western Europe with a sea route to the Far East which could be used for both trade and colonial expansion. Such lands as India, China and Indonesia (the Spice Islands) were now accessible by sea - albeit with difficulty - and the race was now on to exploit these new markets. In this race, Portugal had a head start, and was to emerge as one of the world's leading maritime powers. In the meantime, as we have seen, other seafarers from Western Europe, such as Columbus, Cabot and Amerigo Vespucci, were opening up sea routes to the west and discovering lands of enormous size and potential. This was a period of discovery which was to lead to an age of conquest and exploitation.

his fellow countryman, the poet and soldier Luis de Cameons, wrote his famous work Os Lusiadas, a long narrative poem based on Vasco da Gama's historical voyage to India. It was at once hailed as Portugal's national epic. ...…

xxxxx...... During his voyage to India in 1498, Vasco da Gama took this statute of the Archangel San Raphael with him to ensure his safe return.

xxxxxAs we have seen, it was in 1488 that the Portuguese navigator Bartolomeu Diaz rounded the Cape of Good Hope. Ten years later his fellow countryman Vasco da Gama sailed further and reached India's Malabar coast in May 1498. Then, following an expedition to India by Pedro Cabral in 1500, Vasco da Gama made a second visit to the Far East two years later. He founded a trading station at Cochin and landed in Mozambique. Twenty years later he was appointed Portuguese viceroy, but died in Goa two months after his arrival. His discoveries, plus those of Diaz and Cabral, apart from giving Portugal a head-start as a trading nation, opened up the whole of the Far East to European enterprise. In the meantime, Columbus, Cabot and Vespucci were opening a New World in the opposite direction. This was a period of discovery that was to lead to an age of conquest and exploitation.