xxxxxThe Portuguese exploration along the west coast of Africa, first stimulated, as we have seen, by the efforts of Henry the Navigator in 1419 (H5), provided the impetus for the trade in black Africans. Badly in need of agricultural labourers, Portugal had begun importing slaves from West Africa as early as 1444. Within twenty years their trading posts along this stretch of coast were transporting over 800 slaves a year to Portugal to work on farms and estates. Meanwhile a similar traffic in black slavery was being carried out by Arab traders in North Africa. Africans from the interior of the continent were being shipped to markets in the Middle East and India. In this trade, the white dealers, being unable to travel too far from the coast because of the increased risk of disease, relied heavily upon the assistance of local chieftains and traders.

xxxxxThe need to import black Africans to the 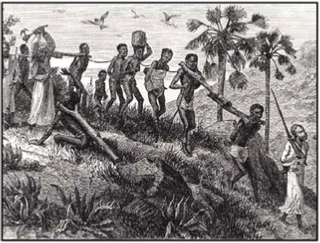 New World first arose because the indigenous people - named Indians - proved unable to endure the conditions of slavery, and were fast becoming exterminated. In general, the captives of West Africa who were transported to America - and had survived the voyage! - did cope with the climate, and they also proved more able to contend with the harsh life of forced labour. As we shall see, this pitiful traffic in slavery was destined to grow to enormous proportions with the introduction of huge plantations, a system which required a large workforce.

xxxxxSlavery, of course, was by no means a new phenomenon; far from it. Many “civilisations” in ancient times - like those of Egypt, Greece and Rome - would not have survived and prospered without a plentiful supply of slaves, generally acquired as a result of conquest. Likewise the Aztecs and Incas of central and southern America, and the European feudal system itself were dependent upon slavery or serfdom, be it for sacrifice, warfare or downright hard labour. Such slavery, in all its different forms, was degrading and, with very few exceptions, harsh and inhuman.

xxxxxBut the transatlantic traffic in

slavery, which began as a trickle in 1502, was to prove particularly degrading, particularly harsh and particularly inhuman, if only because of the dreadful conditions which had to be endured - and often were not endured - on the long outward sea journey. And it was a traffic in misery which was to be compounded by the very size of its undertaking. It was not a chapter of which African and European alike can be proud. As we shall see, it was to begin in earnest in 1518 (H8), and become a flood by the Asiento de Negros agreement of 1713 (AN).

xxxxxThe first trade in West African slaves was begun by the Portuguese as early as 1444 during expeditions of exploration sent out by Henry the Navigator as from 1419 (H5). And around this time, Arab traders were also finding markets in the Middle East and India. After the indigenous people in North America proved unable to cope with the conditions of slavery, black Africans began to be imported. It started as a trickle in 1502 but grew to vast numbers, stimulated by the growth of the plantation system. Slavery, of course, had been a fact of life since ancient times, and was widespread in cultures like the Aztecs and Incas, but the transatlantic trade was particularly harsh and degrading, if only because of the inhuman conditions endured, or often not endured, on the long outward sea journey. It was a sad chapter in human history. As we shall see, it was to begin in earnest in 1518 (H8), and become a flood by the Asiento de Negros agreement of 1713 (AN).