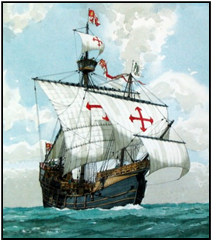 famous navigator and explorer Christopher Columbus was born in Genoa, Italy and went to sea as a youngster. At one time he served on a pirate ship. He settled in Lisbon in 1476, possibly as the result of a shipwreck, and, convinced that a passage to Asia could be found by sailing westward, sought financial backing for his project. Receiving no support, he moved to Spain where his plan was again rejected. In 1492, however, after six years of petitioning, he gained the support of the Spanish monarchs King Ferdinand and Queen Isabella, and in August of that year he left on his first voyage. Despite the doubts and fears of his crews, the three small ships under his command - the Nina, the Pinta and his flagship the Santa Maria (illustrated) – sighted land on the 12th October 1492. He landed on what is now San Salvador Island, and then went on to reach Cuba and Haiti, convinced that these islands were situated off the coast of Asia, and were thus part of the “West Indies”. 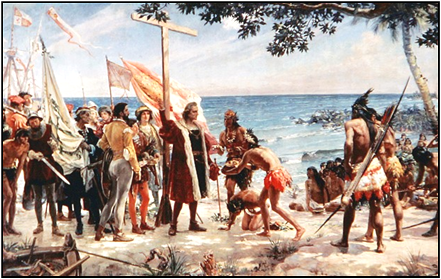 He later became convinced that Cuba was Japan and Cathay (China) lay beyond.

xxxxxOn his return, no time was lost in sending out a larger expedition made up of seventeen ships and almost 1,500 men. This expensive enterprise did discover more Caribbean islands, including Puerto Rico and Jamaica, but it failed to come back with the riches one associated with the Orient. As a result, Columbus returned to a somewhat cool reception. The only major achievement of the voyage was the setting up of a colony named Isabella on the island of Hispaniola in 1494 - close to the earlier settlement of Navidad, which had been destroyed by the “Indians”. This was later moved to the south coast, and, being renamed Santo Domingo, became Europe's first permanent foothold in the New World. 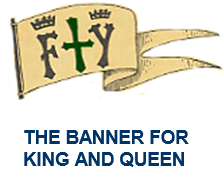 voyage of exploration in 1498 - considered necessary after the Portuguese had despatched Vasco da Gama off to India via the Cape of Good Hope - proved even less auspicious, with Columbus and his brothers returning in chains after a bloody conflict with the colonists of Santo Domingo. What was not realised at the time was that during this expedition he had actually reached the mainland of the continent and “discovered” South America! (See map of voyages below, and those of mariners who might have found the New World before him!)

xxxxxHaving received a royal pardon, his fourth and final voyage, begun in May 1502, took him as far as Honduras and Panama in Central America, but then his ships were battered in a storm and found to be riddled with holes. He was forced to stay for a year in Jamaica before help arrived, and he did not reach Spain until November 1504. By then he had lost royal support. Sick in body and mind, he died eighteen months later, still believing that he had found the East by going west. 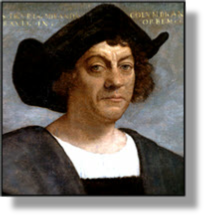 xxxxxColumbus was an outstanding mariner, perhaps the greatest of all time, but his overbearing belief in his own destiny, together with his arrogance and overriding ambition made him many enemies, and contributed to a life of almost incessant confrontation and drama. During his voyages, he was constantly faced with the threat of mutiny, and his harsh administration of his newly-found territories brought him into bitter conflict with his own people. He was not a fit man to govern, and it is hardly surprising that he should return in chains at the end of his third voyage!

xxxxxHis abiding conviction that Asia could be directly reached by sailing west was based on religious belief as well as on current theories. He was much influenced by the writings of Ptolemy and the Florentine mapmaker Paolo Toscanelli, but he also quoted passages from the Old Testament to support his “divine” mission. Indeed, towards the end of his life he came close to setting off for Jerusalem on the grounds - shaky to say the least - that one or more of the prophets had predicted that the Holy City would be liberated by the Spanish!

xxxxxColumbus died at Valladolid and he was buried there. In 1513, his body was transferred to the Carthusian monastery of Santa Maria de las Cuevas in Seville. Later, in 1542, his remains and those of his son Diego were taken to Hispaniola and interred in the cathedral of Santo Domingo.

xxxxxIn 1492 the Genoan navigator Christopher Columbus, representing Spain, sailed westward and landing on the island of San Salvador, discovered America. He then went on to reach Cuba and Haiti and, thinking that he had reached Asia, called these islands the “West Indies”. On a second voyage in 1494 he discovered Jamaica and set up a colony named Isabella on the island of Hispaniola, later moved to Santo Domingo. Two other expeditions proved of little value, however. He lost royal support, and his quarrelsome nature and harsh treatment of his newly-found territories brought him into bitter conflict with his own people. Nonetheless, his discovery of the New World was a momentous achievement, to be followed by Cabot’s discovery of Newfoundland in 1497, and Vasco da Gama’s voyage to India in 1498.

xxxxxThe discoveries made by Columbus were, of course, momentous, opening up as they did the vast new lands across the Atlantic, but they were only part of a series of discoveries achieved at this time. In the meantime, Vasco da Gama had opened the sea route to the east African coast and the sub-continent of India beyond in 1498; John Cabot had discovered the coast of Newfoundland in 1497; and Amerigo Vespucci, having reached the coast of Brazil in 1501, had given his name to this huge new continent, its vast size and equally vast potential yet to be realised. 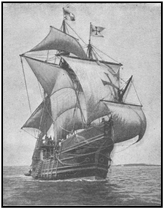 although Columbus is generally regarded as discovering the New World - and understandably so - it is almost certain that the Vikings reached the American Continent, probably around 1,000 AD. (see map above). ……

xxxxx…… Asxfar as the first sighting of the New World is concerned, this honour went to Rodrigo de Triana, a humble seaman standing at the prow of The Pinta (illustrated), but the large monetary prize for this distinction was claimed by, and went to, Grand Admiral Columbus! ……

xxxxx…… The Santa Maria, the flagship on the first voyage, ran aground and sank off Hispaniola on Christmas Day 1492. The exact site of the wreck was located by a team of divers in 1968. ……

xxxxx…… For Spain it was indeed the discovery of a new world. Within fifty years the greater part of South America, Central America, Mexico and the West Indies were under Spanish rule, conquered by the conquistadors! 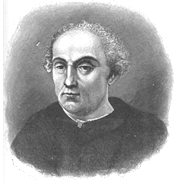 that the idea of reaching the East by travelling west was actually put forward by the Florentine cosmographer Paolo Toscanelli (1397-1482). He provided Columbus with a map for his first voyage, based on the writings and maps of the 1st century Greek geographer Strabo. It has long since been lost, but below is a facsimile of it, alongside a map showing the continent he missed out! Toscanelli numbered among his friends the Italian architects Filippo Brunelleschi and Leon Baptiste Alberti. As we shall see, in 1500 the Spaniard Juan de la Cosa became the first cartographer to produce a map showing the new lands.