xxxxxThe astronomer and mathematician Ulugh Beg was the grandson of the Mongol leader Tamerlane, and son of Tamerlane’s fourth son, Shah Rukh. He spent most of his life at Samarkand, once Tamerlane's capital, and he made this city a major Moslem centre of scientific learning. In 1420 he established a school for advanced mathematics, and then, between 1424 and 1429, he built a three storey observatory. By accurate observation he and his team completed a set of astronomical tables by 1437, and these included the position of the planets and a catalogue of over 1000 stars. As a mathematician he produced his five-place tables of sines and tangents for every minute of arc. He succeeded his father in 1447, but two years later was put to death in a palace coup. 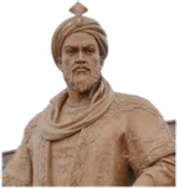 aaaaaThe astronomer and mathematician Ulugh Beg (illustrated) was the grandson of the Turkoman Mongol leader Tamerlane who in the latter part of the fourteenth century, as we have seen (1402 H4), had carved out for himself a vast empire in the Middle East and southern Asia, plundering, destroying and slaughtering as he went. He it was who defeated the once-mighty Golden Horde on the River Kur in 1395, and then in 1402, near Ankara, had virtually destroyed the Ottoman army under Bayezid, putting a brake on their advance and giving a new lease of life - if only for 20 years - to the crumbling Byzantine Empire.

aaaaaOn his death in 1405 - he was on his way to conquer China! - his lands were divided among his sons and grandsons and this led to the inevitable internal feuds. His fourth son, Shah Rukh emerged the victor. He abandoned his father’s capital at Samarkand in preference for Herat in Khorasan (now western Afghanistan), and he left his son, Ulugh Beg, in the former capital to act as his deputy. It was here, in a period of comparative tranquillity, that Ulugh Beg set out to make Samarkand a major Muslim centre of scientific learning. 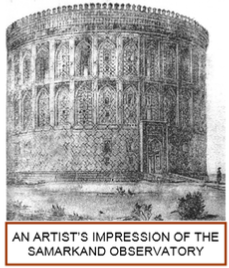 1420 he founded a school of higher learning specialising in astronomy and advanced mathematics. Then a few years later, between 1424 and 1429, he built a three-story observatory and began his study of the heavens. From here, he and a team of assistants made very accurate observations of the sun and the planets, and from their calculations were able to produce the Zij, a set of astronomical tables, completed in 1437. It included the positions of the planets, and a catalogue of over 1,000 stars, the position of the vast majority of which were re-determined with astonishing precision. In addition, these tables corrected a number of errors in the reckoning of the second century Egyptian astronomer Ptolemy. They were not printed until 1665, but they were known in Europe in the 1500s.

aaaaaAsxa mathematician, Ulugh Beg produced his five place tables of sines and tangents for every minute of arc, a remarkable achievement for his time, and he was a patron of Jamshid Al-Kashi, (c1380-1429), an accomplished Persian astronomer, and one of the most talented mathematicians of the Islamic world. His work Key to Arithmetic, completed around 1425, outlined the advances made in arithmetic calculation, and included sections on practical geometry and algebra.

aaaaaFor the most part, Ulugh Beg managed to keep peace in his own domains, but when, as the sole surviving son, he succeeded his father to the throne in 1447, he lacked the leadership qualities required. A group of Timurid princes plotted against him, and in 1449 he was put to death in a coup organised by his son, ‘Abd al-Latif.

aaaaaIncidentally, Herat, the new capital, established by Ulugh Beg’s father, Shah Rukh, also became an important centre of learning for Islam, but here, emphasis was placed on literature and the visual arts. The town became renowned for its library and its brilliant school of Persian miniaturists, as well as for the construction of some magnificent public buildings, the work of the Persian architect Qavan ud-Din, assisted by Gawhar, one of Shah Rokh’s wives.