xxxxxThe colossal Chinese encyclopedia known as the Yung Lo Ta Tien was completed around 1407. Written by some 2,000 scholars, it covered a vast range of subjects, and included Confucian canon and a large amount of Chinese literature. It proved too costly to print and only a small number of manuscript rolls has survived. The work was directed by the Emperor Yung Lo, the man who, as we shall see (1414 H5), expanded the authority of the Ming Empire and was responsible for the building of the Forbidden City in Peking. 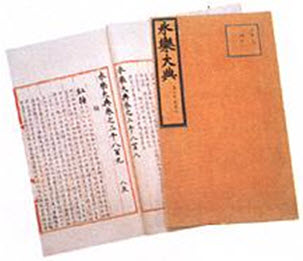 xxxxxThe Yung Lo Ta Tien was a gigantic Chinese encyclopedia, composed over five years under the direction of the Emperor Yung-Lo. Completed about 1407, it comprised 22,937 manuscript rolls or “chapters”, made up into more than 11,000 volumes. Produced by some two thousand Chinese scholars and making up the largest encyclopaedia ever produced, it covered a vast range of subjects, including history, art, philosophy, the sciences and Confucian canon. In addition, it contained and thus preserved thousands of excerpts and, in some cases, entire works from Chinese literature.

xxxxxMeaning The Great Canon of the Yung Lo Era, it was issued at the beginning of the fifteenth century, but only a small number of the rolls have survived, and these were published in 1963. It was considered of immense value as a piece of scholarship but, because of its enormous size, it proved too costly to print. It is believed that, eventually, three manuscript copes were made.

xxxxxIncidentally, it was Emperor Yung-Lo who, as we shall see (1414 H5), greatly expanded the authority of the Ming Empire and was responsible for the building of the Forbidden City in Peking.