xxxxxAs we have seen (1276 E1), Edward I completed the conquest of Wales in 1284. In 1400, however, the Welsh nationalist leader Owen Glendower began a serious revolt against English rule. Despite three expeditions, led by the king himself, by 1404 most of Wales was in the hands of the rebels. In this rebellion the Welsh were aided by the Scots and, at one time, the French. Also fighting alongside Glendower because of ill-feeling towards their king were two members of the Percy family, the Duke of Northumberland and his son Henry (known as Hotspur). The turning point came in 1405 when Prince Henry (the future Henry V) defeated the Welsh in three battles. In 1413 Glendower and his men took to the mountains, and he was never heard of again. As we shall see, during the rebellion, Hotspur was killed at the Battle of Shrewsbury in 1403, and his father, the Duke of Northumberland, at Bramham Moor five years later. 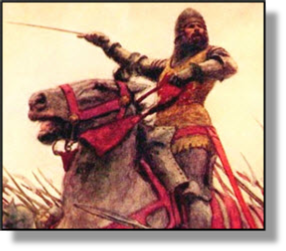 xxxxxAs we have seen (1276 E1), the conquest of Wales was completed by Edward I in 1284, but this did not put an end to national rebellion. The Welsh prince and patriotic leader Owen Glendower (here illustrated) proved a serious threat to Henry in the opening years of his reign. Beginning in North Wales in 1400, he led a successful revolt against the English in a bid for independence. English castles were taken by the Welsh nationalists, and three expeditions, led by Henry, ended in failure. By 1404 most of Wales was in the hands of the rebels.

xxxxxIn these early years Glendower found an unexpected ally in the Percy family of Northumberland. The Duke of Northumberland and his son Henry (known as Hotspur), angered by the lack of reward received from the king following their defeat of the Scots at Homildon Hill, joined forces with the Welsh and, indeed, the Scots as well, to overthrow the monarch. When this bid failed with their defeat at the Battle of Shrewsbury in 1403, Glendower sought and received aid from France. French privateers attacked along the south coast of England, and French troops were sent to aid the Welsh. In the meantime, however, Hotspur - who was to feature prominently in Shakespeare’s Henry IV - was killed at the battle of Shrewsbury and his father at Bramham Moor five years later, and this greatly assisted the royalist cause. 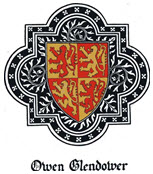 xxxxxThe turning point in the fortunes of the Welsh came in 1405, when an English army led by the king’s son Prince Henry, the future Henry V, defeated the Welsh in three successive battles. Welsh strongholds were gradually captured, and by 1413 Glendower and his depleted army were forced to take to the mountains. From here they carried out a series of guerrilla attacks until the disappearance and probable death of Glendower in 1416.

xxxxxAs the last great champion of Welsh independence, Glendower came close at one time to throwing off English rule. He styled himself Prince of Wales - the last Welsh chief to claim that title - and, during his few years in power, he called into being a Welsh parliament and established his own government for Wales. He was pardoned by Henry V in 1415, but by that date nothing was known of his whereabouts.

xxxxxIncidentally, as one would expect, Glendower’s gallant stand against the English made him a national hero, and his exploits have been embellished over the years with an ample amount of myth and legend. In Henry IV, Part 1, for example, Shakespeare portrays him as the idealised, heroic figure, somewhat larger than life perhaps.