xxxxxOn coming to the throne Henry IV was beset with problems, including an uprising in support of Richard II and a series of Scottish attacks across the border. In addition, as we have seen, in 1400 the Welsh nationalist leader Owen Glendower began a rebellion and, three years later, gained the support of the Percy family - the Earl of Northumberland and his son Sir Henry (known as “Hotspur”). They had been loyal defenders of the crown but, claiming that they had not been sufficiently rewarded for their services, joined forces with the Welsh. In June 1403 Hotspur mustered a force and marched to meet his father, but he was intercepted by the king at Shrewsbury. In the ensuing battle Hotspur was defeated and killed. His father fled to Holland but returned to Scotland in 1407 and was himself killed at the Battle of Bramham Moor the following year. The greatest threat to Henry's throne was over. 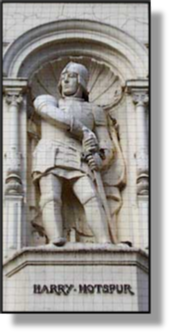 xxxxxHenry IV was no sooner on the throne than he was beset with many problems. Not least among these was an uprising in support of Richard II, a series of Scottish attacks across the border, and a serious rebellion in Wales under the leadership of Owen Glendower. As we have seen, the Welsh revolt started in 1400, and became a real threat to the throne three years later when the Earl of Northumberland and his son Sir Henry Percy (known as “Hotspur” and illustrated here) issued a manifesto claiming that Henry had acquired his crown by fraud. They promptly raised a large force, and joined the Welsh and the Scots against the English crown.

xxxxxThis defection was the more surprising because, hitherto, the Percy family had been loyal supporters of the monarchy. The Earl had served Richard II in a number of important offices, and then given his backing to Henry, then Duke of Hereford, in the matter of the succession. Indeed, he also played a large part in the abdication of Richard II, and Henry’s success in gaining the English throne owed much to his support at that time. Andxit was Northumberland and his son who, meeting the Scots near Durham in 1402, won a resounding victory at the Battle of Homildon Hill, thus bringing much needed respite from the constant Scottish attacks into the northern counties. 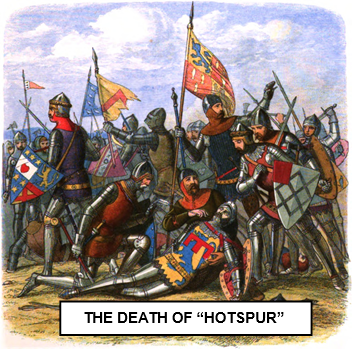 xxxxxHowever, it was this battle with the Scots and earlier conflicts along the border which were the major cause of their rebellion. Both were angered at the little reward they had received from the king in recognition of their services - particularly when contrasted with the pathetic showing of the king himself against the Welsh rebels. Not only was payment for their fighting expenses slow in coming, but Henry had also forbidden them to claim ransoms for their Scottish prisoners - a lucrative source of income. This is why father and son were literally “up in arms”.

xxxxxIt was the son, Hotspur, who in June 1403 first raised the banner of revolt. Mustering a force in Cheshire, he marched to meet his father’s army, but was intercepted by Henry at Shrewsbury the following month. In the battle which ensued the rebels were defeated, and Sir Henry Percy was himself killed. His father’s troops arrived too late to take part in the fight. Had they done so, or had Henry not caught up with Hotspur before he joined forces with his father, then the outcome of this rebellion, along with history, might well have been very different.

xxxxxThe Earl of Northumberland then re-pledged his loyalty to the king, but not for long. In February 1405 he again threw in his lot with Own Glendower and, after a further defeat at the hands of the king, fled to Holland. Onxreturning to Scotland in 1407, he raised a force and marched southwards early in 1408. Henry’s army was waiting, and at the Battle of Bramham Moor the rebels were crushed and Northumberland was killed in conflict, like his son before him. The greatest threat to Henry’s throne was over.

xxxxxIn the years to come, the Percy family continued to play a prominent part in the affairs of state. One member was involved in the revolt known as the Pilgrimage of Grace; another was beheaded for supporting Mary Queen of Scots; and yet another was one of the chief conspirators in the Gunpowder Plot!

xxxxxIncidentally, Sir Henry Percy (knighted in 1377) was dubbed “Hotspur” by his Scottish opponents out of respect for his military prowess in keeping them on their side of the border. The character “Hotspur” features prominently in Shakespeare’s play Henry IV.

Hotspur: Statue in Northumberland Street, Newcastle-on-Tyne, England. Shrewsbury: produced by the English writer and illustrator James William Edmund Doyle (1822-1892), contained in his A Chronicle of England BC55 to 1485, published in 1864. Illustrations engraved and printed in colour by the English artist Edmund Evans (1826-1905).