xxxxxThe region between the Zambesi and Limpopo rivers in south-east Africa was settled around 300 AD, and by 950 had become an important trading area under the Karanga. It was probably they who built a complex of stone-structured enclosures. Fifty years later these buildings were extended and eventually made up a vast labyrinth of dwellings known as the Great Enclosure, protected by a huge wall of granite blocks and occupied by the administrators and wealthy merchants dealing in gold, copper and ivory. These precious items were bartered with the East African traders for goods coming from the Far and Middle East. The Empire reached the height of its power around 1400 under a line of kings known as the Mwene Mutapa, but as we shall see, in about 1450 (H6) it went into rapid decline and never recovered.

xxxxxThe first sign of human development in the region between the Zambezi and Limpopo rivers in south-east Africa appears to be an iron age settlement started about 300 AD. Because of its proximity to the coast this gradually developed into a trading centre which began to flourish from around 950 in the hands of the Karanga, the ancestors of the modern Shona people. It was probably these early settlers who, coming into the region about 800, began to build an elaborate complex of stone - structured enclosures which eventually extended over some 60 acres near to the present town of Masvingo. The word “zimbabwe” means ‘house of stone’ in the language of the Shona. 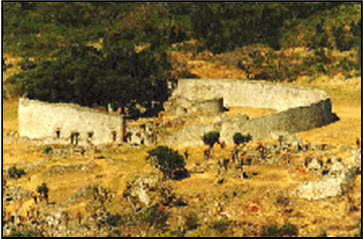 xxxxxThe first development appears to have been a number of stone-walled enclosures on a low-lying hill known as the Acropolis (illustrated). Then some 50 years later these enclosures were extended far into the valley below and, over the years, developed into the building of an immense structure known as the Great Enclosure. This included a huge wall of granite blocks, over 30 feet high in places and enclosing stone-built compounds, the whole linked by a network of narrow, winding alleyways. These well-structured, impressive stone apartments and dwellings were for the administrators and wealthy merchants. The large labouring class lived outside the complex in hovels made of mud. 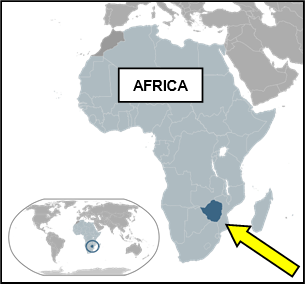 xxxxxThis great inland empire, possibly with a population of 18,000 at its peak, was largely supported by trade. Copper and gold were mined locally, and these minerals, together with ivory, were valuable barter in dealing with the East African traders working along the coast of Mozambique. These traders would bring goods from the Middle East and as far away as south-east Asia and China. Among items found on the site were glass beads, Chinese porcelain, copper coins and figures of birds carved out of soapstone.

xxxxxThe empire reached the height of its prosperity around 1400 under a line of kings known as the Mwene Mutapa (meaning “Ravager of Nations”). Later in the century, however, becoming too large for its own upkeep, it began to decline. As we shall see, around 1450 (H6) it eventually broke up into two kingdoms and, with the arrival of the Portuguese in the sixteenth century, much of the original area came under their authority as a vassal or colonial state.

xxxxxIncidentally, the modern state of Zimbabwe, formed in 1980 and formerly known as Southern Rhodesia, takes its name from the extensive stone ruins of the empire which once flourished in the area, and the national emblem is a bird representing the soapstone figures of fish eagles found on the site. The ruins of this former empire were rediscovered in 1867 and attracted much archaeological interest.

xxxxxThe East African traders began doing business in about 900 AD. Basing their activities on the city ports of Somalia, Mozambique and Zanzibar, they locked onto the highly developed trading routes established world-wide by the Moslems. Enterprising merchants, trading mainly in gold and ivory from the interior, exchanged their wares for exotic goods from the Orient, like spices, porcelain and fine cloth. It was this busy exchange of trade, carried across the Indian Ocean in small Arab sailing boats (dhows), that contributed to the growing wealth and prosperity of the Great Zimbabwe Empire over some four hundred years.