xxxxxAs we have seen, it was in during the third crusade in 1189 (R1) that the religious military order of the Teutonic Knights was formed. Membership was restricted to German nobles and, unlike the other Orders, most of its work was carried out in Europe, crusading against the pagan peoples in the east. The Knights left the Holy Land soon after the crusade, and by 1283 had established control over much of central and southern Germany, together with land along the east Baltic coast. By the end of the 14th century they had extended their authority into Poland, but in 1408 a revolt broke out against the Order's oppressive rule. Lithuania and Poland combined forces, and in 1410 defeated the Knights at the Battle of Tannenberg in north Poland. This marked the beginning of the end for the Order. Their power went slowly into decline. 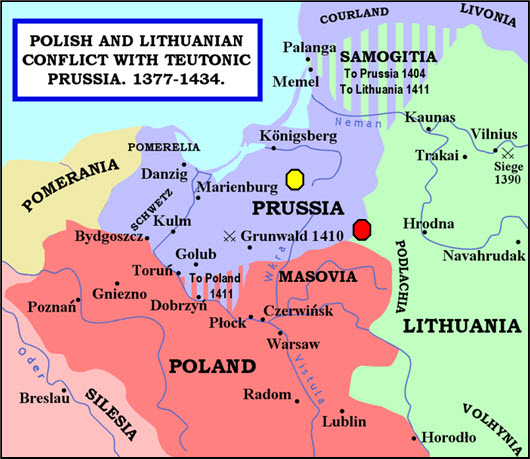 xxxxxAs we have seen, it was during the third crusade in 1189 (R1) that the religious military order of the Teutonic Knights was formed. It was established at Acre in 1190 by the German Crusaders, its full title being the Teutonic Knights of Saint Mary's Hospital at Jerusalem. Recognised by the Pope in 1199, membership was restricted to German nobles, but followed the same format as that of the Knights Templars and the Knights Hospitaller of Saint John of Jerusalem.

xxxxxBut despite its origin, much of the Order's work was carried out in Europe. Under the influence of their grand master Hermann von Salza, many Knights left the Holy Land soon after the third crusade and settled in Eastern Europe, taking up the task of crusading against the pagan peoples in the east. They first assisted the state of Hungary, protecting its border with Transylvania, but were expelled in 1225 for demanding too much recompense from their host. They were then invited to Poland to crusade against the pagan Prussians, and here they fared

better. By 1283 they had established control over much of this area and were beginning to make their presence felt in central and southern Germany as well as in lands along the eastern coast of the Baltic - all in the name of the Pope. In 1319 they established their headquarters at the Fortress of Marienberg in Prussia (here illustrated and indicated on map above.)

xxxxxBy the end of the fourteenth century they had managed to extend their authority over much of Poland, but had failed to make any serious inroads into the Baltic state of Lithuania despite a number of attempts at conquest. This failure contributed to their downfall. In 1408 a rebellion in Samogitia against the Order’s oppressive rule sparked off a wider revolt, and Lithuania combined forces with Poland. In 1410 their joint army, some 20,000 strong, met 15,000 Knights near the villages of Tannenberg or Grunwald in northern Poland. In the first onslaught, the Lithuanian contingent was defeated, but the Polish ranks stood firm and gained a resounding victory. At the end of the ten-hour battle the Order's forces had been crushed and their grand master and most of their commanders were amongst the several thousand dead.

xxxxxTheir defeat at Tannenberg or Grunwald (here illustrated and indicated on map above) marked the beginning of the end for the Order as a military force. It put paid to any further advance along the Baltic coast, and by 1446, following further defeat at the hands of the Poles, the land they did retain in Prussia was held as a fief of the Polish King. Then in later years, other territories held in Europe, notably Livonia and in the Low Countries, were lost by treaty. The order continued to exist in southern Germany, but was dissolved by Napoleon in 1809. It was later restored, but only as a charitable and nursing movement. As such, it exists today. 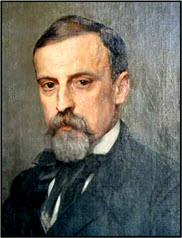 xxxxxIncidentally, The Knights of the Cross, an historical novel published in 1900 by the Polish writer Henryk Sienkiewicz (1846-1916) was a critical portrayal of the Teutonic Order, written largely to strengthen Polish confidence during his country’s partition. In his homeland Sienkiewicz is particularly valued for his Trilogy, set in the 17th century - With Fire and Sword, The Deluge, and Fire in the Steppe - but internationally he is best known for his Quo Vadis, a story that takes place in the city of Rome during the rule of Emperor Nero. Published in book form in 1896, it was made into a highly successful Hollywood blockbuster in 1951. For this and his other novels he was awarded the Nobel Prize for Literature in 1905.