THE RULE OF SHOGUN YOSHIMITSU

xxxxxAs we have seen, it was in 1336 (E3) that a civil war broke out in Japan between rival Emperors at Yoshino and Kyoto. A peaceful settlement was finally reached by Yoshimitsu in 1392. During his reign (1368-1394) he overhauled the administration of the government and, by overpowering feudal lords and stamping out piracy, reopened trade with China towards the end of the century. His court became a centre of scholarship and culture - particularly for art and the development of Noh drama - and his reign is also remembered for the building of some magnificent temples and palaces, including the sumptuous Golden Pavilion. With Yoshimitsu’s death, however, local warrior families began to increase their powers, and rival factions emerged at court. As we shall see, in 1467 (E4) a dispute arose over the succession of the shogun, and this led to the outbreak of the Onin War. 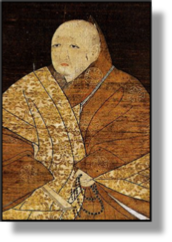 xxxxxWe have seen how in 1336, during the reign of Edward III, the Japanese emperor Go-Daigo was driven from Kyoto by a group of local warriors and replaced by their own, rival emperor. There then followed nearly sixty years of civil war between the southern court in Yoshino, where Go-Daigo had taken refuge, and the northern court in Kyoto. A peaceful settlement was eventually reached by Yoshimitsu (illustrated), shogun of the northern court. After a long campaign he gradually overcame the power of the local warlords and brought an end to the imperial division in 1392.

xxxxxThus by Yoshimitsu’s endeavours, the rule of the Ashikaga shogunate, which his grandfather Takauji had established in 1338, was now given a new lease of life. It survived, in fact, until 1573 and later became known as the Muromachi period, named after the district in Kyoto where Yoshimitsu lived. During his reign (1368-1394) Yoshimitsu totally overhauled the administration of civil government, and by defeating powerful feudal lords in the south-west and clearing the Inland Sea of their pirates, he made possible the reopening of trade with China towards the end of the century. When in contact with the Ming dynasty there he called himself “King of Japan”. 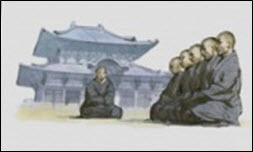 xxxxxFollowing the unity of Japan, Yoshimitsu presided over a period of cultural advancement which was to last late into the fifteenth century. Art and scholarship were encouraged in the five Zen monasteries in Kyoto, and Zen Buddhist monks were employed as administrators, ensuring efficiency and a considered approach to government. Meanwhile, life at court became noted not only for its luxury, but also for its promotion of the arts, particularly the theatre. Yoshimitsu himself was patron to both Kan’ami and his son Zeami, the founders of the Noh drama in its modern form, and he also supported Noami, the first great art expert produced by Japan. 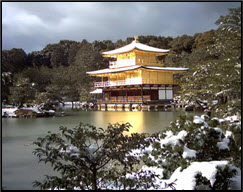 xxxxxThis rule was remarkable, too, for the building of some magnificent temples. Among these was the sumptuous Golden Pavilion, built by the shogun after he retired in 1394 in favour of his son. Situated at Kitayama (Northern Mountain) on the outskirts of Kyoto, it is a magnificent three-storey building, adorned with thousands of pieces of gold leaf, and situated in an elegant Japanese garden. Unfortunately, it was destroyed by an arsonist in 1950, but it was rebuilt in its original form within five years and can be seen today. As a building it provides a lasting and fitting monument to the golden age of Yoshimitsu.

xxxxxYoshimitsu’s reign was a highly successful one, bringing an end to the imperial division and introducing much needed reform, but at his death the authority of the shogun was once again in danger. Local warrior families began to increase their powers, whilst at court, rival factions emerged, each waiting for the opportunity to seize the ultimate prize. The crunch came in 1467 (E4) when a dispute over the succession of the shogun led to the outbreak of the Onin War.

xxxxxNoh drama developed from an ancient form of dance drama. The actor is the storyteller and, as the audience is familiar with the story, the symbols and interpretations of the performers provide the entertainment, not the plot itself. Performances are accompanied by music, and are often concerned with spirits, devils and gods. About 2,000 texts have survived, but only about 225 are in the modern repertoire. Only men are allowed to perform. They wear elaborate costumes, and masques are sometimes worn.

xxxxxThexNoh drama, which developed from an ancient form of dance drama, was refined and given a distinctive form by Zeami Motokiyo (c1363-c1443), based at first upon works by his father, Kan'ami Kiyotsugi. The word Noh means talent, and refers to the performers’ ability to portray their tale through visual appearance and movements. Thus the actor is the storyteller, and there is little activity beyond his own actions. The audience, being already familiar with the story, comes to appreciate the symbols and subtle interpretations of the performers, not the plot itself. 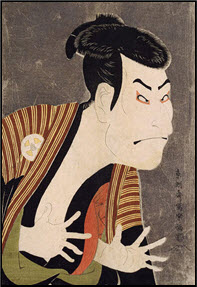 xxxxxA performance usually consists of three to five plays, some in poetry and accompanied by music. The major themes are centred around both the living and the dead, and include such subjects as festive spirits, devils, gods and the ghosts of warriors. Only men are allowed to perform. They wear elaborate costumes, and some wear masks, but the stage setting is very simple, consisting of a backdrop depicting a pine tree and only a small number of essential props. The plays were usually performed in the houses of the nobles, often to mark a particular ceremony or a special occasion, but public performances were also given.

xxxxxSome 2,000 Noh texts have survived, but only about 225 are in the modern repertoire. Kan’ami and Zeami, who transformed noh theatre into a high art form, wrote some of the most beautiful examples. Notable are Matuskaze (Wind in the Pines), by Kan’ami, and Zeami’s Kakyo (The Mirror of the Flower), a work which contains all the major principles of the Noh theatre and served as a guide for performances over many centuries.